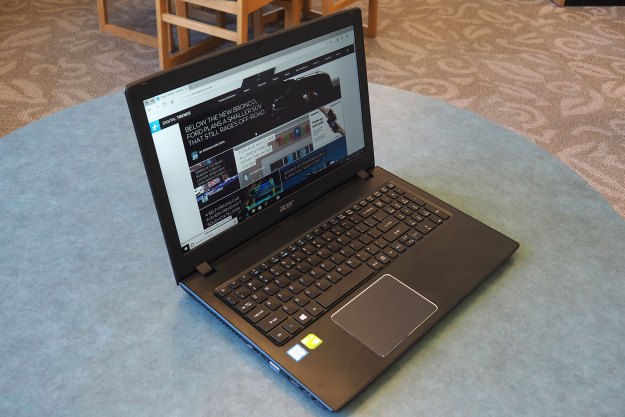 “The Acer Aspire E 15 is a budget notebook that will make you forget how little you paid.”

The average person doesn’t spend $1,000 on a laptop. Unfortunately, those looking for something cheaper are often left to scour Amazon product pages and reviews, all in hopes of finding an inexpensive laptop that doesn’t completely suck.

The question is, was Acer forced to leave anything out to fit the Aspire E 15 into such an attractive price point?

A chunky but serviceable design

We’ll begin by saying this is large notebook in all its dimensions. It’s thick at 1.19 inches, and heavy at 5.27 pounds, and it suffers from some very wide, old-school display bezels. It’s also a mostly plastic construction that’s a bit bendy in the lid, has some flex in the aluminum keyboard deck, and generally isn’t as solid as you’ll find in more expensive all-metal designs. We’ll note as well that the hinge is very stiff — you’ll need two hands to open the lid, but the display does tend to stay firmly in place.

The Aspire E 15 might not be the highest-end build, but it’s nevertheless robust enough to carry around the house or on the occasional field trip, and it’s at least as well-built as its budget competitors like Acer’s own Aspire 5.

The lid has a “metallic textile pattern” that adds a little flair, and the touchpad is outlined in a chrome-colored accent. Otherwise, you’re getting a simple design that’s not as modern as Acer’s Swift 3 budget notebook. This is typical for budget laptops, however. None of the Aspire’s competitors will wow you with looks.

Components are impressive for a budget machine, and performance rivals more expensive notebooks.

Acer has made good use of the thick chassis to help manage heat and noise. The fans do spin up when the CPU and GPU are under load, but they’re never so loud as to be obnoxious. And there’s enough room to move air around and keep the discrete GPU running at full speed, as we’ll see later in our benchmark results.

Another plus to the large chassis is upgradability, something more expensive laptops often lack. You can pop open the bottom cover to upgrade the RAM to its 16GB maximum and manage the storage slots — on our review unit, that means you could add a 2.5-inch drive to go along with the M.2 format SATA SSD that’s already installed. Also unusual is the 8X DVD-RW drive that’s built-in, which is nice to have even if it’s not quite as in-demand as it once was.

The Aspire E 15 packs in plenty of connectivity. You’ll get a USB-C 3.1 Gen1 port (no Thunderbolt 3 support, though), two USB-A 3.0 ports, a USB-A 2.0 port, a full-size HDMI port, a VGA port, an Ethernet connection, and a 3.5mm combo audio jack. The usual 2×2 MU-MIMO W-Fi and Bluetooth radios are on hand to round out the connectivity. You shouldn’t have to worry about scrounging around for dongles.

The Acer Aspire E 15 has the usual island keyboard and squeezes in a 10-key numeric keypad. What’s unusual for a machine that’s so reasonably priced is the keyboard’s feel. It offers plenty of travel with a comfortable bottoming action. The layout is standard, and it doesn’t feel cramped even while offering a keypad’s convenience. The keyboard backlight’s single brightness level is even and attractive.

The touchpad is large, offers a smooth surface with just the right amount of friction, and supports Microsoft’s Precision Touchpad protocol for full Windows 10 gesture support. The left and right buttons are hidden at the bottom of the touchpad, but are responsive without feeling cheap. Again, this is a touchpad that punches above its weight class — in fact, it’s larger and more responsive than the one you’ll find on slightly more expensive notebooks like the Asus ZenBook UX330UA.

That’s it for input. There’s no touch display or Window 10 Hello biometric support, which isn’t surprising given the price point, but does detract a bit from overall convenience.

Check out budget notebooks and you’ll find quite a few with a 1,366 x 768 resolution displays. That makes the Aspire E 15’s 15.6-inch Full HD display refreshing.

Once we put the display at the mercy of our colorimeter, we were pleasantly surprised overall. Color gamut support was relatively narrow, coming closest to the Aspire 5 and Swift 3, but short of slightly more expensive options. Brightness was very low at 173 nits. However, contrast was class-leading at 960:1, color accuracy was decent, and gamma was perfect at 2.2, meaning videos won’t be too light or too dark.

The display was pleasant to use for typical productivity tasks, as well as watching Netflix and YouTube.

Subjectively, the display was pleasant to use for typical productivity tasks as well as watching Netflix movies and TV. Colors didn’t exactly pop, but high contrast made for nice black text on a white background. Really, at this price point, we’d expect to see a far worse display.

Sound is another matter entirely. While the dual stereo speakers are plenty loud, they distort at high volumes and are serviceable at best. You can use it to watch the occasional YouTube video, but to really enjoy music, movies, and TV shows, you’ll want to plug in your favorite headphones.

There was a time when budget notebooks were limited to low-end Intel Pentium processors and limited RAM, and thus suffered from poor performance across the board. That’s no longer the case, however, and the Aspire E 15 is a case in point. It offers eighth-generation quad-core Intel Core i5 and i7 processors and up to 16GB of RAM. Our review unit used the Core i5-8250U and enjoyed a solid 8GB of memory.

This is an impressive combination for such a low-end machine, and it resulted in performance that rivaled much more expensive notebooks. In both synthetic and real-life benchmark tests, the Aspire E 15 provided excellent processor performance and had more than sufficient power to churn through just about any productivity task. It kept up not only with its budget siblings but also challenged more expensive options like the Dell Inspiron 15 7000 Gaming, which had a Core i5-7300HQ.

Storage performance is one area where Acer cut some corners with its choice of a Hynix 256GB SATA SSD. The drive isn’t fast, and the Aspire E 15 fell far behind the PCIe SSDs in some other systems including the Swift 3. We’ll note that although the drive is slow for an SSD, it’s still much faster than the spinning hard-disk drives you find in many other notebooks at this price. And in real-world use, it’s still plenty fast enough for typical productivity and gaming tasks.

Surprisingly, this notebook has an Nvidia GeForce MX150 GPU. It isn’t the fastest graphics chip you’ll come across, but it’s much quicker than the usual Intel integrated graphics. It can even handle some newer games, as long as you lower the resolution and details.

As we mentioned earlier, Acer made good use of the Aspire E 15’s large chassis to make sure the components can be kept cool. This paid off in our gaming benchmarks, where the notebook competed well with other machines equipped with the MX150, like the Aspire 5 and the Asus ZenBook 13.

This was most apparent in our real-world gaming tests, where the Aspire E 15 managed a decent 35 frames per second (FPS) in Civilization VI at Full HD and medium settings. That’s a few FPS faster than the other MX150-equipped notebooks, and fully playable. The Aspire E 15 was even more impressive in Rocket League, where it managed 79 FPS in Full HD and performance mode, blowing away the similarly-equipped competition. It even managed 51 FPS in high quality mode, still a few frames faster than our comparison machines. We even saw 33 FPS, in Full HD and medium settings, while playing Battlefield 1.

It’d be a mistake to call this Aspire a gaming machine, but it works well enough in many games. That’s high praise for a laptop that’s $600. In fact, this simple laptop is quicker in games than many ‘premium’ laptops sold for twice the price.

It’s a lot to lug around, but leave the power brick behind

The Aspire E 15 isn’t a portable notebook by today’s standards. It’s large, thick, and heavy at over five pounds. You won’t want to carry it around any longer than you must. But the notebook packs in a large 62 watt-hour battery to go with the efficient eighth-generation Intel Core processor.

As it turns out, battery life is a real strength. The Aspire E 15 provided solid longevity across our suite of tests, and was competitive with some much more expensive notebooks. It lasted for four hours on our most aggressive Basemark benchmark test, over nine hours in our web browsing test, and just over 12 hours playing a local video.

Those are impressive results, and they mean that the Aspire E 15 can last a full working day away from a charger. Battery life is usually a budget notebook’s Achilles heel, but Acer managed to turn it into one of the Aspire E 15’s more impressive strengths.

The Acer Aspire E 15 is a great example of a machine doing its intended job very well. It’s not a premium notebook and doesn’t pretend to be one. Rather, Acer clearly aimed to provide a solid value, with performance, build quality, and battery life that leads the class for less money than you’d expect to pay. Taken all together, the Aspire E 15 is more notebook than you’d expect to receive for the money, and that’s a very good thing.

One of the more direct competitors to the Aspire E 15 is Acer’s own Aspire 5. That machine’s also a rather large and chunky 15.6-inch notebook that’s similarly priced and shares a similar build quality. It’s still mired in the past, though, and it costs the same $600 for a seventh-generation Core i5-7200U CPU, 8GB of RAM, a 256GB SATA SSD, and a Full HD display. You save on some thickness, but you also give up the DVD-RW drive. And you won’t see nearly the battery life, either.

Another interesting option is the Dell G3 Gaming Laptop. It’s a 15.6-inch budget gaming notebook that’s a bit pricier, starting at $730. However, what you get is a do-it-all laptop with some impressive gaming capability. But battery life isn’t great, and neither is the display.

One way to spend even less money is to go with a Chromebook. These notebooks are often less expensive than their Windows equivalents. However, it won’t run the same applications nor work as well when it’s not connected to the internet, and so whether it’s a viable option comes down to what you need your PC to do.

The Aspire E 15 is built well enough that you won’t worry about how long it lasts, particularly given the minimal investment. And it’s running the latest eighth-generation Intel CPU, with the ability to pop open the case and upgrade the RAM and storage yourself. It even has a USB-C port to provide some future-proof connectivity. If you run into problems, you’ll be covered by a one-year warranty.

Yes. You’re not likely to find a better machine in this price range. The Aspire E 15 would make a great laptop for just about anyone with typical computing needs, proving plenty of power and battery life for churning through productivity tasks, and even some light gaming capability.