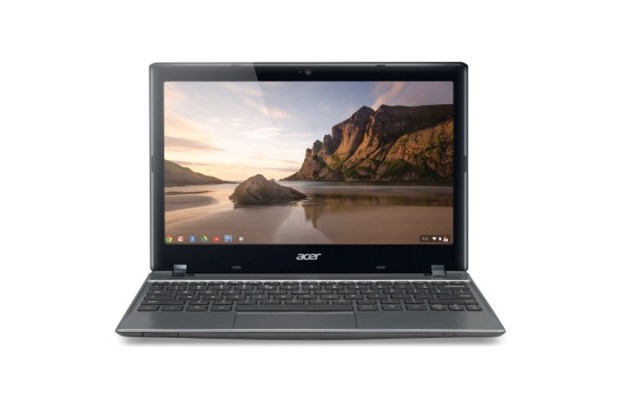 “Acer’s C7 Chromebook is a stunning value. The only major sacrifice a buyer has to make is accepting the Chrome OS, which is becoming easier over time.”

Besides Samsung, Acer is the only other company to release a Chromebook – though there’s speculation of Google releasing its own Chromebook. Acer didn’t bring much attention to itself with its first Chromebook, which simply wasn’t as good as Samsung’s, leaving it to languish. It appeared the end was near for Acer’s Chromebook line.

But then … surprise! A new variant was announced just after Samsung took the wraps off its new $249 ARM-powered entry. Acer’s alternative is attempting to steal the low-price limelight from its only competitor by setting a price of $199. And that’s with an Intel Celeron processor.

Two hundred bucks for an Intel-powered 11.6-inch laptop seems almost too good to be true. A few years ago, consumers were paying almost twice that for Intel Atom netbooks – and that was considered a bargain. Let’s see if this inexpensive option is as good a value as it looks on paper.

As a Chromebook this laptop of course ships with Chrome OS. Though it still has its limits, the operating system has come a long way since its introduction. It now includes a desktop, an excellent taskbar, and can handle multiple windows.

Third-party support has also gotten better. There’s now a wide variety of apps and games available, many of which, including Gmail and Google Docs, can now be used offline. That helps fill the functionality gap between a Chromebook and a standard Windows PC.

Many features are still missing, though, including built-in security and parental controls. Google is relying on security-by-obscurity to protect Chrome OS users. That may work for now, but it’s not a great long-term solution.

Bloatware isn’t an issue. Only a few links are included in the taskbar by default that send the user to Gmail, Google Search or YouTube. This helps keep boot times short and makes the most of the processor.

Have you ever laid eyes on a netbook? If so, you have a good idea what the Acer C7 is like. Its 11.6-inch display results in a small footprint, yet the laptop feels a little chunky because of its 1-inch-thick chassis. The result is a squat appearance that won’t be winning the C7 any beauty pageants.

We can hardly rag on it for its lacking aesthetics, however. This is a cheap, simple laptop that merely needs to be adequately built. By that measure, it excels. All of the plastics feel solid and the design hides panel gaps well. The lid is the only exception. It flexes enough when pushed to cause some disruption in the display panel.

Connectivity includes three USB 2.0 ports, HDMI, VGA, and a card reader. This gives the C7 an additional USB port compared to Samsung’s $249 competitor. That being said, one of the Samsung’s ports is USB 3.0, which the Acer Chromebook still lacks. On the other hand, the Samsung version also lacks VGA, so we’ll call it a tie.

A crammed but useful interface

The 11.6-inch display of this Chromebook gives it limited space to serve up a keyboard. Acer has made use of almost every millimeter, and the effort has paid off. After a few minutes of internal re-calibration to the small key caps, we were able to use the laptop for a three-hour-long writing spree without much discomfort. Key travel was acceptable, and the most important keys – such as backspace and left-side shift – are large enough to easily grab while touch-typing.

The only flaw is the small palmrest, which is about half the size of the area available on a typical 13.3-inch Ultrabook. Our palms had to constantly shift between the laptop and the table it sat on. Users with small hands may not notice this problem.

Though we found it adequate, touchpad size also suffers. Multi-touch scrolling and pinch-to-zoom worked well, but the integrated left/right buttons are of poor quality. That being said, they aren’t frequently needed because the touchpad had no trouble registering tap-to-click.

Punching above its weight

Because our normal testing suite only works on Windows, we couldn’t use our normal test suite on the Chromebook. Subjectively, we found the display quite decent. Black level test images looked just a bit better than average, and banding tests showed a smooth gradient. Viewing angles were also average.

Though a 1366 x 768 glossy display is typical, it looks extra sharp when crammed into the 11.6-inch frame. There’s no readily noticeable gap between pixels on a white page, and 720p YouTube videos looked brilliant. In this respect, the C7 performs better than many laptops that sell for three or four times the price.

We can’t say the same for its audio performance. The speakers lack bass and are limited to an extremely low maximum volume. We’ve tested smartphones with sound that was both more pleasing and louder. A pair of headphones or desktop speakers is mandatory.

Shhhhh. Can you hear it?

Idle testing found that the C7’s fan was rarely louder than the ambient noise in our quiet test location. The Chromebook does have a fan, and it can be heard, but it’s only noticeable in an absolutely dead-silent room. The main source of noticeable noise is the mechanical hard drive.

Placing the laptop under load did result in a reading off 44.3 decibels. This is still low, however, and the unique operating system of a Chromebook makes it difficult to find truly demanding software. The fan rarely has to spin in real-world use.

The low-speed fan didn’t result in high temperatures. At idle, we measured a maximum of 86 degrees Fahrenheit in a small hotspot on the laptop’s bottom. Load increased that figure to only 89 degrees Fahrenheit. Temperatures along many surfaces were below 80 degrees no matter the load.

Not built for endurance

While the C7’s thickness of just over an inch makes it a bit chunky by today’s standards, its weight of three pounds is light. This is a small laptop that’s easy to handle and can be readily chucked in almost any messenger bag or backpack. Even large purses can swallow it up.

However, You may need to pack the charger since endurance is a bit of an issue. The small 37Wh battery in this laptop is rated at 4 hours. In reality, that seemed optimistic. We found that about 3.5 hours of light Web and productivity use was enough to drain the C7 completely. At least the charger is small and light.

Power testing revealed a system that uses about 11 watts of power at idle with the display at 50 percent brightness. That’s on par with a Windows Ultrabook. Load testing showed 21 watts of consumption, however, which is much lower than average. The system also drew only 14 watts while charging its battery.

The Intel Celeron found in the C7 is a slower variant of the hardware found in Samsung’s more expensive Series 550 Chromebook. It’s clocked at 1.1 GHz and is supported by 2GB of RAM and a 320GB mechanical hard drive. No solid-state storage is included in this model.

Relying on mechanical storage impacted performance less than we expected. The C7 still boots up in under 10 seconds and loads new browser tabs instantly. Performance testing with the Peacekeeper browser benchmark resulted in a score of 1,480. That number’s a bit behind the Samsung Series 550, which scored about 1,700 in our tests, but it’s ahead of Samsung’s ARM-powered Chromebook, which scored 1,226.

We found that the C7 to be snappy in real-world use. The hardware isn’t blazingly fast when compared to Windows laptops, but it’s more than enough to power Chrome OS. We were even able to play 720p YouTube videos without skipped frames or audio lag.

Gaming is the only area of concern. We found that most titles on the Chrome store were playable, but attractive and demanding games, like Bastion, suffered from obvious performance issues that made gameplay difficult to enjoy.

Acer’s C7 Chromebook is a stunning value. The only major sacrifice a buyer has to make is accepting the Chrome OS, which is becoming easier over time. Chrome OS is now capable of performing all the basic tasks the average user requires and many apps can be used offline.

It’s a shame, then, that portability is exactly where the C7 falls short. Using this laptop at your local coffee shop isn’t a hassle, but even a short trip by train, plane, or automobile will tax the battery.

But did we mention this laptop costs $200? It does! That’s the same as a Google Nexus 7 tablet or a year-old unsubsidized Android smartphone. We find it hard to be harsh on the C7 because, battery life aside, it’s a competent computer at an absurdly low price.

Buying this Chromebook comes down to your needs. It’s not the best primary PC, and it’s not a good option for cross-country trips. It is, however, the perfect companion for around-the-house and around-town. If you’d like a laptop to compliment your desktop, the C7 is an excellent choice.