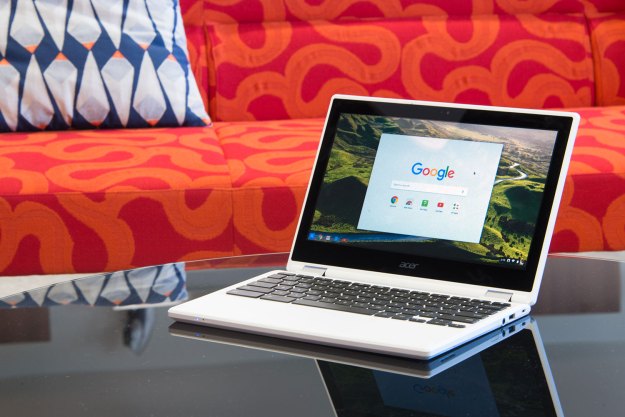 “Acer's Chromebook R 11 offers a touchscreen, but ChromeOS doesn't take advantage of it.”

If your tablet only offered a web browser, would you use it? Acer is hoping so.

Its new Acer Chromebook R 11 isn’t the cheapest Chromebook we’ve ever seen. $330 puts it squarely in the mid-to-upper tier of pricing in a ChromeOS’s low-cost niche. It’s also not the most powerful Chromebook, sporting an Intel Celeron N3150 quad-core processor from the “Braswell” family – much slower than the Core line most people know Intel for.

But the Acer Chromebook R 11 does stand out in one clear way. It offers a touchscreen, and a turnaround hinge. This means you can use it as a laptop, or flip the screen around and use it like a tablet.

There are other upsides to report. Its 4GB of DDR3L SDRAM is plenty for ChromeOS, and the 32GB SSD isn’t bad so far as Chromebooks go. But is ChromeOS with a touchscreen compelling enough to justify a $100 price hike?

A solid 2-in-1 with an attractive case

Pick up the the Acer Chromebook R 11 and you’ll find a lot to like. The textured top and bottom panels give you a solid grip, making this an easy laptop to carry around that’s compact while closed. There’s not a lot of flex to the case, and the double-jointed wraparound hinge works really well. You can turn the screen all the way around in one smooth motion, but it will hold steady wherever you leave it — no screen wobbling here. While in tablet mode things feel natural. Well, as natural as a tablet with a deactivated keyboard on the back can possibly feel.

Considering the price point, there’s not a lot to complain about in terms of build quality. It’s solid, and this is a $350 device, not a premium one. It’s a plastic case, though Acer did add a sheet of textured aluminum to the top panel to add a little bit of premium flair.

Touchscreens don’t add much to ChromeOS

A big reason for the recent surge in laptop/tablet hybrids is Windows 10. That operating system offers two distinct modes — one for general computing, another for tablet usage — that prioritize different things. When you’re using your machine as a laptop, you see the start menu and the conventional desktop. When you’re using it as a tablet, you see the start screen and one app at a time, with larger interface elements. This software solution makes the hardware of 2-in-1 devices very appealing to use.

ChromeOS doesn’t offer anything like that. There is an on-screen keyboard, and the screen auto-rotates when you flip the device. Both of these features are nice, but beyond that, ChromeOS needs a lot of work before it can really benefit from a touch screen.

The interface elements aren’t optimized for a touchscreen. They’re too small. If you want to close a tab, you’re likely to miss the tiny “x” button more times than not. The same happens if you want to open a new tab, or fill in the boxes on a form. Mobile operating systems are designed with clumsy fingers in mind. ChromeOS is not.

Things would be different if ChromeOS actually offered its long-rumored support for Android apps, but like many Google plans that effort seems to have fizzled. You might well find a use for the Chromebook R 11’s touchscreen, but we’re not sure it’s a feature most people will actually use all that often.

The Chromebook R 11 sports one USB 3.0 port and another USB 2.0 port. There’s an SD card reader, allowing you to supplement the 32GB internal drive. For your audio-visual needs, there’s an HDMI port and a headphone jack.

Chromebooks are known for their unique keyboard layout, and the R 11 is not an exception. The F keys are gone, replaced entirely by functions like volume, brightness, and full-screen. The caps lock key, that relic from the typewriter age, is also gone, replaced with a Google-friendly search key.

The keys themselves aren’t exceptional in any way, but not bad either. They’re comfortable to type on and give a somewhat crisp feedback that, while not pronounced, is also not vague. Some users might find the keyboard a touch small.

The touchpad is problematic. It’s plenty wide, but not terribly tall, which can leave your finger hitting the edges a lot during normal usage. You can tap-to-click, and we suggest you do, because the actual clicking feels chintzy. Remember how infomercials sometimes use an exaggerated mouse clicking sound right after mentioning their website? This touchpad actually sounds like that.

Overall, the keyboard and touchpad are about what we expect from a $330 laptop. Not exceptional, but also not bad.

The Chromebook R 11 sports an 11.6-inch display, which isn’t a lot of room to work with. Perhaps because of this, Acer decided to offer a max resolution of 1366 x 768, which is quite a bit short of the full HD (1920×1080). It’s a very low resolution in a world where smartphones routinely offer HD, and means it’s literally impossible to watch a video in full HD.

Otherwise, the display’s quality is acceptable. While watching the unnecessarily dark trailer for Batman Vs. Superman, I had trouble making out a lot of details, and it wasn’t all Zack Snyder’s fault. It can be hard to distinguish dark things on this display, including Batman. In brighter scenes, though, the laptop looked reasonably good, with reasonably vibrant color and good-enough contrast. Again, you have to keep in mind the price. The display is no award-winner, but it’s acceptable for a $330 computer.

This Chromebook’s Intel Celeron N3150 processor is a quad-core running at 1.6GHz. It is part of the “Braswell” family, which it does not use the Core architecture found in most Intel chips. A quad-core sounds fast on paper, but the reality of the Celeron N3150 is different.

There’s not a lot of flex to the case, and the double-jointed wraparound hinge works well.

That’s not a lot of power, but it’s enough for most Chrome users. In day-to-day browsing you won’t notice any hang-ups, but you occasionally might play online games or use web-based photo editors and the like. For things like email and Facebook, however, this Chromebook will chug along nicely.

Our benchmarks won’t run on ChromeOS, so we’re left with subjective tests. But running the Chrome browser on a five-year-old MacBook is a much better experience for day-to-day usage, and anyone with a reasonably powerful Windows 10 computer is likely to feel the same way.

The Chromebook R 11certainly doesn’t compare well to the Toshiba Chromebook 2 (2015), which could handle just about anything without a performance hit. And certainly, this processor running Windows or OS X would be disaster. The lightweight ChromeOS makes affordable hardware workable, which is no small part of its appeal.

At 2.76 pounds, this is a lightweight laptop, and it’s only three quarters of an inch thick while closed. You should be able to fit it into any bag or backback without any difficulty, and you might not even notice you’re carrying it.

The battery life is also decent. We recorded six hours and 33 minutes of life out of a single charge while running the Peacekeeper benchmark. We’ve seen Chromebooks reach as high as as seven hours, but six and a half is very respectable.

Our web loop battery test, where we cycle through a series of popular websites, showed a similar result: six hours 35 minutes. If you’re browsing the web, you can expect a half-day of usage away from the charger.

This laptop comes with a standard one-year warranty. That’s the norm for laptops of any price, so we wouldn’t expect more from this affordable Chromebook.

Touchscreen adds to price but not to value

Acer Chromebook R 11 costs $100 more than devices with similar specs, so it’s the touchscreen and reversible hinge that set it apart. If you can see yourself occasionally flipping over the screen and reading a website in tablet mode, and are willing to pay $100 for that, we say go for it. Otherwise, the R 11 doesn’t make sense.

The Acer Chromebook 15, for example, is a better buy. For less money you’ll enjoy a bigger screen and similar specs. The Dell Chromebook 11, meanwhile, has the same screen size as the R 11, but is $100 less. Another cheaper Chromebook is the Lenovo Ideapad 100S. Even Acer makes several standard clamshell Chromebooks that are substantially less expensive.

You get the idea. You’re paying for the touchscreen. That isn’t unusual among 2-in-1 devices, but we’d argue ChromeOS doesn’t make most of the feature. Look elsewhere unless touch is something you’re absolutely certain you want.