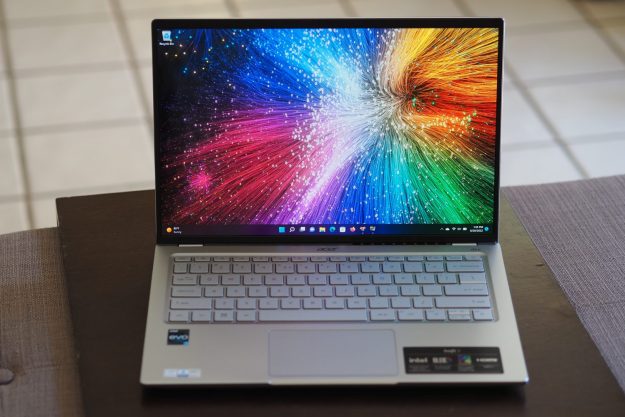 “The Acer Swift 3 OLED comes with a spectacular display and impressive performance.”

Acer has been slow to jump on the OLED laptop bandwagon. But finally, the company has brought an OLED panel to its popular midrange 14-inch laptop, the Swift 3.

This is more than just the standard Acer Swift 3 with a better 90Hz OLED screen swapped in. This laptop is also thicker to handle its 45-watt 12th-gen processor, so you should expect some better performance out of this 14-inch laptop. Price is important though, and although the base configuration comes in under $1,000, my review unit landed at $1,230. Fortunately for Acer, there’s enough to justify a slightly higher price, making the OLED a solid upgrade over the original.

OLED, yes, but at what cost?

OLED used to be reserved for the cream of the crop, but lately, it has dropped into some affordable laptops. For example, the HP Pavilion Plus 14 also offers a 90Hz OLED display for just $800 with equivalent specs to the high-end Acer (except for a smaller 256GB SSD). That’s just one configuration, mind you, and if you use HP’s custom configurator, the price is higher.

Point is — the OLED is right in the same ballpark as many of its close rivals, but it needs to offer something unique to rise above.

To start with, the Swift 3 OLED’s 14-inch 16:10 display is excellent and competes well against both midrange and premium alternatives. You can tell from the table below that, outside of color accuracy that’s slightly behind the best, the Acer’s panel is bright, colorful, and offers the usual OLED inky blacks. It’s a display that will please just about everyone, including creatives and content creators.

It’s a great display for Netflix binges too, though the OLED’s audio doesn’t quite match it.

The speakers are good enough, with sufficient volume for a small office and clear mids and highs that are fine for system sounds and the occasional YouTube video. But if you want to watch a movie, you’ll want more bass than the two upward-firing speakers provide, so a pair of headphones or external speakers are likely to be appreciated.

As I mentioned earlier, manufacturers have installed Intel’s 45-watt 12th-gen CPUs in 14-inch thin and light with varying success. In some cases, performance was thermally limited to the point where there was little advantage over Intel’s 28-watt CPUs with fewer cores. The most common alternative CPU is the 28-watt 12-core/16-thread Core i7-1260P.

As we can see from the table below, the Swift 3 OLED performs more in line with the 14-core/20-thread Core i7-12700H in the larger and thicker Dell XPS 15 across all our benchmarks. The HP Pavilion Plus 14 and Asus Vivobook S 14X are closer to the Core i7-1260P in Geekbench 5 and our Handbrake test while running faster in Cinebench R23.

One test where the Swift 3 OLED fell behind was PCMark 10 Complete, which tests a mix of productivity, multimedia, and creative tasks. Note that I’ve listed both balanced and performance mode results, achieved by using each manufacturer’s utility for dialing in CPU frequencies and fan speeds.

All these throttled to one extent or another, but the Swift 3 OLED managed to maintain its performance more consistently. Because it’s limited to Intel’s Iris Xe graphics, it will not break any records with applications that use the GPU to speed up certain tasks, like Adobe’s Creative suite. But, for demanding productivity workflows and CPU-intensive creative apps, the Swift 3 OLED is a strong performer.

The Swift 3 OLED’s gaming performance was surprisingly poor, even by integrated Intel Iris Xe graphics standards. I’m not sure why the laptop was so slow, hitting just 11 frames per second in Fortnite at 1200p and epic graphics, but it’s definitely not a gaming machine. I only include these results to stress the point.

A cost in longevity

With performance as a strength, the next question is, how long does it last on a charge? Using the faster CPU and a high-res OLED display should strain the 57-watt-hour battery, which isn’t large for a 14-inch laptop.

In our suite of battery tests, the Swift 3 OLED did OK compared to the other 45-watt in our comparison group while falling behind the 28-watt machines. That’s to be expected, and it’s one of the costs of using the faster chip — although battery life is another area where the Acer beat the HP Pavilion Plus 14. Overall, the Swift 3 OLED won’t last a full day’s work, meaning you’ll need to carry the power brick along with you.

Everything else is ho-hum

In terms of its design, the Swift 3 OLED benefits most from the switch to a taller 16:10 display over the non-OLED version’s old-school 16:9 panel. That makes the laptop look more modern and provides a more productive experience. Otherwise, the same silver chassis with simple lines and no bling makes for a minimalist design that borders on boring. HP’s Pavilion Plus 14 is a more attractive laptop.

The build quality remains the same, with an all-aluminum chassis that resisted most bending and flexing during my testing. It’s a solid build for a midrange laptop, although again, the Pavilion Plus 14 wins, by a hair in this case. The Swift 3 OLED is thicker than the non-OLED model at 0.70 inches versus 0.63 inches and heavier at 3.09 pounds versus 2.76 pounds. Again, that’s necessary to accommodate the faster and hotter CPU. Despite its uptick in thickness and weight, the Swift 3 OLED is a reasonably sized 14-inch machine.

Connectivity remains a strength, with Thunderbolt 4 and the latest wireless standards on hand. The 14-inch laptop typically has advantages over 13-inch machines when it comes to plugging in, and the Swift 3 OLED maintains that trend.

The Swift 3 OLED’s keyboard seems to be the same as on the other model, with light and snappy switches and plenty of key spacing. The keycaps are large enough, although the silver keys are hard to read with the backlighting turned on with any ambient lighting. On the other hand, the touchpad is also the same as the previous model, which is a shame — given the taller display, there’s more room on the palm rest for a larger touchpad. It works well enough with quiet and precise buttons, but it’s just too small. The display isn’t touch-enabled, which I always miss.

The webcam is a 1080p version, which is welcome, and it provided a bright image with Acer’s Temporal Noise Reduction technology helping out in low-light conditions. It’s a good webcam for videoconferencing.

Finally, Windows 11 Hello passwordless login support is provided by a fingerprint reader embedded in the power button, which is precisely the right spot. It worked quickly and reliably during my testing.

A decent first go at an OLED machine

In the end, there’s much to like about the Swift 3 OLED. It leverages its faster CPU, unlike some other 14-inch machines, and its OLED display is as good as it gets. Its build quality is solid for a midrange machine, although not the best in its class, and its connectivity and keyboard are excellent. The touchpad’s too small and the battery life is too short, which are the laptop’s two most significant weaknesses.

But even so, it competes well against the two most pertinent alternatives in the HP Pavilion Plus 14, which is available in one configuration for around $400 less, and the Asus Vivobook S 14X, which is closer in price. And you’re only paying $100 more compared to the non-OLED Swift 3, which makes the OLED version a relative bargain. The Swift 3 OLED’s price might be a smidge too high, but it’s mostly justified.

So, should you buy it? Yes, if faster performance to go with the spectacular display is your objective. You’ll suffer in battery life, but outside of the one incredibly low-cost HP Pavilion Plus 14 configuration, the Swift 3 OLED provides a compelling enough value to belong on anyone’s shortlist.