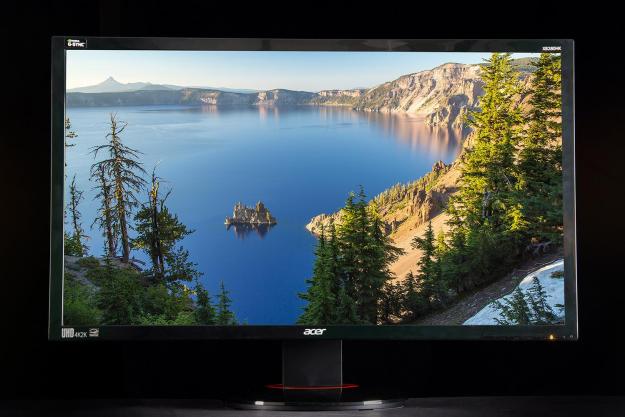 “If your PC can handle 4K gaming, and you're willing to pay the premium price, you'll love the Acer XB280HK.”

The term “gaming monitor” didn’t mean much at one point. While displays that carried this slogan commonly offered response times which were a tad quicker than their peers, the average monitor was already fast enough to make the advantage unnoticeable. Gamers knew this, and generally went for high-quality IPS displays instead.

Over the past year, however, both AMD and Nvidia have introduced display synchronization techniques that finally gave more meaning to the phrase “gaming monitor.” Displays that support this feature can align their refresh rates with the frame rates of the games you’re playing when using them. This eliminates stutter, screen tearing, and other artifacts. However, this is not a feature that can be patched in. You have to buy a new monitor to get it.

Acer’s XB280HK is the company’s flagship entry into this new category of gaming monitors. It boasts a 28-inch 4K screen with support for Nvidia G-Sync, which is a combination that’s made for gaming.

It doesn’t come cheap though, as it carries an $800 price tag. This makes it one of the most expensive gaming monitors out there. So, is it worth the premium rate?

The XB280HK is framed by a svelte, glossy black bezel that gives it a cutting edge look. While reflections originating from the plastic bezel could pose issues in very bright rooms, the borders are so slim that this usually isn’t a problem. Around back, Acer switches to matte plastic that looks mundane, but feels durable. Overall, the Acer XB280HK’s build quality easily lives up to its $800 MSRP.

The Acer XB280HK is the first gaming monitor we’ve ever reviewed that truly improved our playing experience.

An ergonomic stand with tilt, swivel, and height adjustments props the monitor up. Encased in plastic, the stand feels sturdy, and the broad circular base isolates the screen from most vibrations. The monitor is VESA compatible, so you can use a different stand if you don’t like what Acer includes.

Connectivity is limited to DisplayPort 1.2. This may confuse some buyers, as it’s common for a display that’s this large to have three or four inputs. The reason for this restriction is due to the XB280HK’s ultra HD resolution, and G-Sync functionality. DisplayPort is the only input that has enough bandwidth to drive this panel.

The monitor can also serve as a USB hub thanks to its four USB 3.0 ports. Two are found on the left flank, and two are on the monitor’s rear.

Despite its price, the XB280HK comes with a rudimentary control scheme that’s not much different from what you’ll find on less expensive displays. Five tactile buttons are used to navigate a menu that pops up along the screen’s lower right edge. A number of icons represent different options but, with the exception of brightness, none of the icons clearly indicate what they symbolize. You’ll have to venture into them to find out for yourself.

While there are a few image quality presets offered here, the bulk of the monitor’s options are found in a single sub-menu. Users can adjust brightness, contrast, color temperature, and gamma. The gamma control actually targets a value rather than a vague preset, which we appreciate, but this perk is offset by a lack of color control options. Even simple changes to RGB can’t be accomplished using the monitor.

Overdrive, which is a feature that’s unique to this monitor, claims to combat ghosting by increasing pixel response time. We didn’t notice much of a difference with the feature on or off, as the display suffers from minimal ghosting at its default settings anyway.

Our first impressions of the XB280HK were tainted by the display’s limited viewing angles. This is most noticeable on the vertical axis. Image quality degrades drastically when looking at the monitor from a standing position. Fortunately, you can rectify the issue by using the adjustable stand to place the display where it looks best.

While the XB280HK isn’t perfect when it comes to color accuracy, it’s close.

When we dug deeper using our calibration tools, we found that the display is a very capable performer. The XB280HK can render 96 percent of the sRGB gamut out of the box, along with 71 percent of Adobe RGB. It also boasts a solid contrast ratio of 620:1. While the Acer’s color gamut results don’t beat the LG 34UM95, which is an IPS wide-format display that we tested earlier this year, the Acer’s out-of-the-box contrast rivals the AOC G2770PQU.

We were also impressed by the color accuracy results. We recorded an average delta error of 2.31, and we also noted that no result deviated from this average by more than two. The largest error the human eye can see is a delta error of one. So, while the XB280HK isn’t perfect when it comes to color accuracy, it’s close.

This beats or ties the pre-calibration results of every monitor we’ve tested in 2014, save for the Samsung S27D390H. We also measured gamma at 2.1, which is just off the 2.2 target.

Like most monitors, this Acer ships with its brightness set to maximum. We recorded a brilliant 306.5 lux rating, which is one of the highest results we’ve seen. While this is perfect for a retail store floor, it’s not great for use in a typical home environment. This setting eliminates shadow detail, and can cause eye strain after looking at it for just a few minutes. There’s no glare to deal with either, because the XB280HK has a semi-glossy coat that rarely produces reflections.

While the XB280HK looks good at its default settings, it does suffer from an overly bright picture, poor shadow detail, and excessively cool color temperature. Thankfully, these problems were resolved with a single round of calibration.

Color gamut didn’t change much after calibration, and contrast was reduced to 530:1 because we significantly decreased panel brightness. This also decreased black brightness by half, however, which improved the image quality of dark scenes in movies and games.

The biggest improvements were found in color accuracy. The average delta error dropped from 2.31 to 1.55, which is a strong figure that almost ties the AOC G2770PQU. That unit scored 1.44. We were also able to correct the gamma curve to a perfect 2.2, which bests the AOC’s result of 2.0.

With the display calibrated, we fell in love with the Acer XB280HK’s picture. Games look crisp, life-like, and beautiful. Even text documents and browser windows had a precise, clear, and balanced look that rivals the best monitors we’ve tested. While we’d like to see slightly higher contrast for better shadow detail, most people who use this monitor will find little to complain about, aside from the narrow viewing angle.

Living with 4K and G-Sync

Color accuracy and gamma don’t tell the XB280HK’s full story though. The monitor’s 4K resolution and Nvidia G-Sync tech have their own chapters as well. Acer’s XB280HK is the only G-Sync monitor currently available. Simply put, displays don’t get more advanced than this.

Upping resolution to 4K (3,840 x 2,160) makes games look better than ever before. Even older titles like League of Legends and Diablo 3 benefit. The enhanced sharpness is most evident in textures, which look much more life-like than they do on a 1080p or even 1440p monitor, but the added detail helps everywhere.

With the display calibrated, we fell in love with the Acer XB280HK’s picture. Games look crisp, life-like, and beautiful.

In Battlefield 4, for example, we noticed that explosions looked richer and more realistic at 4K, while in Diablo 3, we took note of particle effects that are easy to miss at lower resolutions.

We’re also happy to report few UI or scaling issues in the games that we played at 4K. Even Final Fantasy XIV: A Realm Reborn, an MMORPG with a busy interface, was enjoyable once we scaled the UI to 140 percent of normal using in-game settings.

You’ll need some serious hardware to power the XB280HK at an acceptable frame-rate, however. Nvidia’s new GeForce GTX 980, which is the most powerful single-GPU graphics card around, struggles to play games at 4K resolution while maintaining a frame rate of 30 FPS or better. While we had no such problems in Diablo 3, we had to play Battlefield 4 at Medium detail. An expensive dual-GPU rig is required to enjoy demanding games on this monitor.

4K also minimizes the appeal of Nvidia G-Sync to an extent. The technology can handle monitors with very high refresh rates, but the XB280HK is comfortable only at 60Hz because the extreme resolution requires significant bandwidth. You won’t see improved responsiveness in games that run beyond 60 FPS. With that said, G-Sync still does its job. Frame stuttering and synchronization problems are completely eliminated. The result is extremely smooth rendering that’s evident in character animations and particle effects.

The benefits of G-Sync were slightly spoiled by a flickering problem. At times, the Acer XB280HK exhibited the worst flickering issues we’ve seen in years. This is an artifact rooted in G-Sync. Tying the refresh rate with frame rate means that the display refreshes very slowly if a game’s FPS drops into the upper 20s.

While we understand why this occurs, it’s disappointing to see flickering appear in an $800 display. Plus, this is a problem that was largely thought to be banished long ago. We hope Nvidia can fix the problem with driver updates.

The Acer XB280HK is the first gaming monitor we’ve ever reviewed that truly improved our playing experience. While competitors like the AOC G2770PQU are less expensive, and provide roughly equivalent color accuracy, Acer’s combination of 4K and G-Sync delivers a knockout monitor that no competitor can match. This display can add new life and detail to your favorite games.

Yet, it’s not a monitor that’s a good fit for everyone. You’ll need a pair of high-end Nvidia graphics cards, like the GTX 780 Ti, GTX Titan or GTX 980, to play the most attractive games at maximum or near-maximum detail. That’s an expensive proposition.

This is not Acer’s fault, however. Gaming is an expensive hobby, especially if you want cutting-edge graphics and performance. The PC’s most dedicated fans have accepted this. So, if hardcore gamers are willing to pay the $800 premium, they’ll adore the Acer XB280HK.