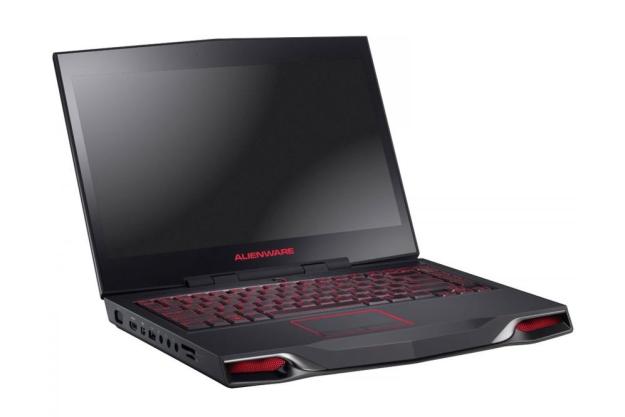 “Size is the selling point. You have to decide if that matters. The 11.6 display the older M11x used was too small, and the M15x was too big. The M14x is just right.”

Alienware made a dramatic change to its lineup in 2011. For years, Alienware, along with all of the other companies in the gaming laptop market, has offered a 15-inch laptop model. That was just the de facto size for a mid-range gaming machine.

But then Alienware decided it had a better idea. The company discontinued the 15-inch model entirely and introduced the 14-inch M14x in its place. The new Alienware was the only 14-inch gaming laptop at the time of its introduction, and it remains alone.

Now Alienware has introduced a new version of the M14x. The new model includes the latest Intel third-generation processor and Nvidia’s new GT 650M graphics processor. The exterior is largely the same, but we didn’t review the original. This is our first look at the M14x.

Although the smaller M11x is still for sale, its days are numbered. Alienware has no plans to update it, and it will eventually be discontinued. The M14x will soon be the smallest laptop Alienware sells. Is it suitable for gaming on the go? Let’s find out.

Alienware’s design language remains the same across all of its laptops. The matte-black lid and interior provide the laptop with subtle menace while remaining functional and attractive after heavy use. We also enjoy the faux air vents at the front, which are lit by LEDs. The vents serve no purpose, but neither does the factory hood scoop on a new Mustang GT.

Plenty of LEDs show up elsewhere, of course, and you can customize them all. Want fluorescent pink accents? No problem. Want them to flash? I don’t know why you would, but yeah, the M14x can do that, too. Or you can turn off the LEDs, which might be the best choice if you’re playing in a dark room.

Chassis rigidity is impressive. This is a big, thick laptop, yet handling it by the corners causes no groans of bending plastic. Pushing hard on the interior of the laptop or on the display lid can lead to flex, but it’s never more than typical for laptops of this size. Panel gaps are extremely small, which is good, because this laptop has quite a few of them.

Connectivity is robust. The M14x has individual headphone and microphone jacks in addition to a dedicated headset jack. Video options include HDMI, Mini-DisplayPort and VGA. These features are rounded out by two USB 3.0 ports and one USB 2.0 port. We’d like to see another USB 2.0 and perhaps eSATA, but the M14x is already packing more ports than is typical for a laptop of this size.

The keyboard, like the chassis, is typical Alienware. Don’t let the keyboard’s beveled design fool you into thinking it’s built with typists in mind. Key feel is soft and imprecise. This is annoying if you’re trying to work on your thesis but a boon when you’re repeatedly tapping keys in a game.

Backlighting is, of course, included and easily customized. Most keys are evenly lit, and the variety of color options is excellent. However, dim spots appear under large key caps such as the shift key and caps lock key.

Touchpad quality is usually a low point of Alienware products. Again, the M14x doesn’t deviate from the norm. The touchpad offers a reasonable amount of space, and the individual left and right keys provide decent tactile feel, but the touchpad surface offers little feedback. Multi-touch scrolling is turned off by default. This prevents an errant tap from causing problems in-game. Alienware clearly expects gamers to use this laptop with a mouse.

Our review unit arrived with a 1600 x 900 display. We think this is the perfect resolution for a gaming laptop of this size. The display offers crisp graphics yet also leaves the graphics processing unit (GPU) with some breathing room. Remember, increasing resolution also increases the demand placed on the graphics solution.

The display is among the best TN-panel options on the market. Colors appear vibrant and lush, and black level performance is above average. Gradient banding test images appeared reasonably smooth. Viewing angles are the only potential flaw – test images lacked uniformity no matter the angle of the display. This is common among laptops, however, and will be unnoticeable when gaming.

Audio quality also proved strong. Some bass is available, and maximum volume is loud enough to fill a living room with enjoyable music. This is one of the few laptop sound systems that can go toe-to-toe with an inexpensive pair of external speakers. We noticed that the M14x experienced none of the chassis vibrations that sometimes interrupt the otherwise excellent audio quality of the M17x.

Placing gaming hardware in a small package is likely to raise temperatures. The M14x can’t escape this reality. We noticed that the palm rest felt warm on our hands even when the system was idle. Our infrared thermometer registered a temperature of 92 F.

Gaming increased temperatures to 96 F along the palm rest while the underside rose as high as 105 degrees. That makes the M14x uncomfortable for laptop use.

Temperature may be high because of an unaggressive cooling profile. The fan is quiet at idle and doesn’t aim for redline until you’ve been gaming for a few minutes. Fan noise was tolerable even at the fan’s highest setting.

This 6.45-pound Alienware is an unlikely candidate for the next Weight Watchers spokesperson, but it’s no sumo wrestler, either. Most desktop replacements and some 15.6-inch media laptops are equally heavy. At 1.49 inches, it’s a bit thick but still thinner than most gaming laptops. This laptop will fit in most mid-sized messenger bags and backpacks designed to carry laptops, which is an improvement over 15.6-inch and 17.3-inch gaming hardware.

Battery life comes courtesy of a large eight-cell battery pack that’s difficult to remove. The pack provides endurance that is good for a laptop with this kind of hardware. The M14x lasted one hour and 12 minutes in our battery eater load test and four hours and 41 minutes in our light-load reader’s test. The average buyer will be able to use this laptop outside the home without constantly dragging along the power adapter, but long trips require the heavy and large power adapter.

All Alienware computers come with a minimum of bloatware. The only apps included are those needed for controlling the laptop’s custom hardware, such as AlienFX, which handles the LED lighting. The software looks less professional than we think it should, but it is functional.

Our review unit also arrived with a Qualcomm Atheros Killer Wireless-N adapter. The Killer products are a brand of network solutions that prioritize gaming traffic in an attempt to provide lower latency. This option provides some nifty driver controls that let you dictate how the wireless radio allocates available bandwidth.

Our review unit arrived with an Intel Core i7-3610QM processor paired with Nvidia GT 650M graphics featuring 2GB of GDDR5 memory. Our review unit also was upgraded to 8GB of RAM and a 750GB hard drive.

The quad-core Intel processor smoked our benchmarks by providing a combined score of 90 GOPS in SiSoft Sandra’s Processor Arithmetic benchmark. We also received a combined score of 18,659 in 7-Zip. These results are among the best we’ve received from any laptop. Intel’s third-generation Core i7 processors mean business.

PCMark 7 returned an excellent overall score of 4340. That’s nearly as good as the score we received from the recently updated Alienware M17x and much better than the Lenovo IdeaPad Y480, which scored 2,592. A better graphics processor and a higher system storage score are the reasons behind the M14x’s excellent result.

The Nvidia GT 650M graphics processor led the laptop to a 3DMark 06 score of 15,587 and a 3DMark 11 score of 2,088. Both results are substantially better than Lenovo IdeaPad Y480, which has a GT 640M LE. However, these scores are much lower than those the Alienware M17x delivers, which was reviewed with the cutting-edge Nvidia GTX 680M.

Real-world gaming showed that the Alienware M14x is able to handle games at its native resolution with high detail settings, but sometimes just barely. Skyrim averaged 29 frames per second (FPS) at maximum detail, and Dawn of War 2: Retribution averaged 54 FPS at its maximum. These results provide an enjoyable gaming experience, but a larger, more powerful gaming laptop can easily double or even triple the FPS .

Our review unit rang up to about $1,600 including upgrades. Some of them are unnecessary for great gaming performance, however, such as the RAM and the Killer Wireless-N solution. But dumping them saves little money; so expect to spend about $1,500 on a reasonably equipped rig.

This price puts the M14x in an awkward position. The M17x is $500 more, but is far more capable even in its base configuration. Anyone who’s unconcerned about portability should save up the extra cash for an M17x. The M14x is also threatened by powerful multimedia laptops such as the Lenovo IdeaPad Y580. That 15.6-inch laptop starts at $899 and comes with a more powerful graphics solution.

Size is the selling point. You have to decide if that matters. Most buyers probably aren’t planning to tote their rigs around frequently, but some PC gamers like to participate in LAN parties or play face-to-face at a friend’s house. These gamers are this laptop’s target audience, and the M14x is the best option for them. The 11.6 display the older M11x used was too small, and the M15x was too big. The M14x is just right.