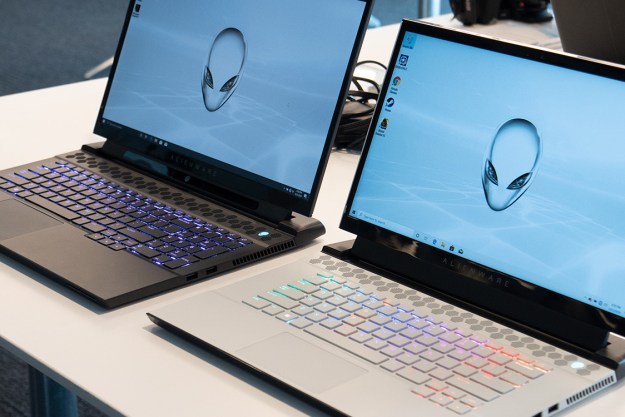 “The Alienware m15 finally feels like a gaming laptop with a unique identity.”

Gaming laptops are advancing at a cutthroat pace, and Alienware isn’t letting its foot off the pedal anytime soon. Its newest update to the m15 and m17 laptops, though, just might be its most exciting.

They not only feature the latest high-end gaming components on the inside, the exterior design has been completely transformed. From eight-core processors to OLED screens, the Alienware m15 R2 has a lot offer, starting at a base price of $1,500. Are these new laptops the flagships Alienware needs?

A new era of Alienware

The Alienware m15 finally feels like a gaming laptop with its own identity.

We loved what Dell did with the massive Alienware Area-51m, a 17-inch gaming laptop with desktop components that the company launched earlier this year. Beyond just its performance, it carved out an awesome new design language, gaining influence more from THX 1138 than Alien.

The clean lines, smooth surfaces, and white color options have been brought over to its more mainstream gaming laptops, including both the m15 and m17. It’s a new direction for not only Alienware, but gaming overall. It’s not attempting to blend in with non-gaming like the Razer Blade. Instead, it shows that gaming can be attractive and original. The ring of light around the laptop’s posterior vents is among the most delightful lighting elements we’ve seen on a gaming laptop yet.

Beyond the look, the m15 has cut some heft. It’s slightly thinner and lighter than before, choosing to employ magnesium alloy to lighten the load. 4.75 pounds isn’t the lightest gaming laptop in the world, and its 0.79 inch thickness sets no records either, but it’s a big upgrade from where Alienware laptops were just a couple of years ago.

It’s not mechanical, but you’ll still like the keyboard

The keyboard is new, and Dell says it’s used a lot of engineering resources to perfect the feel. It doesn’t use mechanical switches, but the keyboard has a 1.7mm travel distance and a defined actuation point to provide tactile feel. The keystrokes didn’t feel mushy, as many rubber dome keyboards do.

It’s a big upgrade from where Alienware laptops were just a couple of years ago.

The m15 corrects a downside to its predecessor by including full-size arrow keys, which gamers will appreciate. Removed, however, is the number pad, which is now exclusively featured on the larger m17 model. The keys have per-key RGB backlighting, which is all customizable through the Alienware Command Center software.

The touchpad is better, too. It’s carried over from the XPS laptops, which tend to have more responsive surfaces.

The Alienware m15 R2 includes a modest array of ports. On the back you’ll find your HDMI, mini-DisplayPort, Thunderbolt 3, proprietary Alienware Graphics Amplifier, and DC Power. On the left side is a USB-A 3.1 Gen 1 port, an RJ-45 ethernet port, and a headphone. Meanwhile, the right side has two more USB-A ports. I appreciate that many ports are located around back, which keys wires out of the way.

Plenty of power, depending on what you choose

Because the Alienware m15 is a bit thick, you’d expect it to outperform its competitors. Alienware representatives seemed confident that the careful tuning of its components and beefed up thermals will do the trick. There’s plenty of extra vents, that’s for sure. They’re located on almost every possible surface, including an attractive new honeycomb design across the top of the keyboard deck.

The new m15 features 9th-gen Intel Core processors, ranging from the quad-core Core i5-9500H up to the Core i9-9980HK. That top choice is an unlocked eight-core process that can boost up to 5.0GHz. Unlike the Area-51m, these are mobile processors and can’t be swapped out in the future.

Unless you’re only interested in casual gaming, you won’t love the performance.

There’s a wide variety of options for displays, starting with the standard 1080p 60Hz model. From there you can jump to a 1080p screen with a 240Hz refresh rate, which will be the best option for most gamers. On the top end, you can snag a 4K 60Hz OLED screen. Both the 240Hz and OLED options have Tobii eye-tracking built-in.

Alienware offers plenty of options, but we are a bit hesitant about the bottom rung. More premium brands like Razer have moved to six-core processors and 16GB of RAM to ensure a solid gaming experience across the range. The Alienware m15’s $1,500 base model might seem like a good deal on the surface, but unless you’re only interested in casual gaming, you won’t love the performance. That said, we’ll have to hold our final judgements for when we get the laptop in for our full review.

Topics
The best mini-LED laptops for 2023
The best 15-inch laptops for 2023
HP Dragonfly Pro vs. Apple MacBook Pro 14: a solid alternative?
Here’s why people are saying to avoid the entry-level M2 Pro MacBook Pro
The best Mac webcams for 2023
The best external hard drives for 2023
The best touchscreen monitors in 2023
A key question for the Mac Pro has been answered — and it’s not good news
Apple Mac Mini M2 vs. M1: don’t make a buying mistake
How to delete a page in Word
HP Envy x360 13 vs. Dell XPS 13: the best tiny laptop?
Apple’s $600 M2 Mac mini obliterates the $6,000 Mac Pro
Here’s how ChatGPT could solve its major plagiarism problem