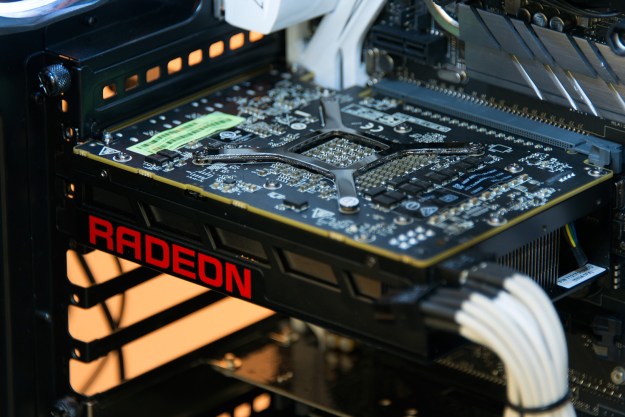 “AMD’s R9 Nano is a compact performer that strikes fear into larger cards, but its price can’t be ignored.”

Despite big promises for AMD’s Fury X flagship card, the actual performance fell short of what we were hoping for, and what the 980 Ti delivered at the same price point. The smaller sibling to the Fury X, the R9 Nano, lowers performance a bit in exchange for a smaller PCB, lower power usage, and quieter operation. It’s aimed squarely at Mini-ITX builders seeking 4K and VR performance in a small rig.

With a few strategic settings concessions, you can achieve 4K gaming.

With the R9 Nano, AMD hopes to change its perception and increase brand relevance by expanding into a market without any competition — half-length cards. It’s a clocked-down version of the Fury X that replaces water cooling with a built-in fan, and hopes to bring high-level performance to pint-sized rigs. With clock speeds of up to 1,000MHz and four gigabytes of high bandwidth memory, the Nano is certainly in the upper echelon of consumer graphics cards.

AMD doesn’t sugarcoat the performance situation – the Nano is supposed to be a bit softened compared to the Fury X, but it costs just as much at $649. Unfortunately, that also places it in the same arena as Nvidia’s impressive GTX 980 Ti. Is there really room for a small card with a big price tag?

To say the R9 Nano looks a lot like the Fury X would be an understatement. Both are adorned with the same matte black and red color scheme that even includes a custom black PCB – the same color PCB the Fury X was hiding under its cooling shroud.

The Nano is also about three quarters the length of the Fury X, at a stout 6.5 inches. It’s also about a quarter inch narrower, and its thickness remains the same. That’s not a huge size reduction from the full size card, and it’s also worth noting that the Fury X is already as much as two inches shorter than other full-length cards. However, the Nano is not liquid-cooled, so it isn’t attached to an unwieldy radiator.

AMD intends for the Nano to be used in mini-ITX enclosures. It will certainly fit in them, with room to spare – which is a bit of a problem. The lack of small, high-performance cards has forced case manufacturers to design small cases with big hardware in mind, so most mini-ITX cases designed for performance can in fact fit a full-sized card. That detracts from the Nano’s main selling point.

That said, the Nano’s size is visually striking. Massive cards have become a cliché, and third-party manufacturers have abused them as a canvas, loading them with flashy plastics. AMD’s Nano, by contrast, is sleek, understated and refined.

On paper, the Fury X and Nano look very similar, but with a few key differences. Both cards support almost every feature that’s been included in AMD cards to date, including Crossfire, FreeSync, LiquidVR, and ZeroCore. Both cards are powered by the same Fiji GPU, with an identical quoted 512 gigabytes per second of memory bandwidth (thanks to 4GB of HBM) and 4,096 stream processing units. The Fury X has a listed clock speed of up to 1,050MHz, while the Nano has a quoted range of up to 1,000MHz.

That difference is a bit more pronounced than you might think. Both cards operate within specified thermal limits, and a card may not reach its maximum stated clock speed if it’s too close to its thermal maximum. It’s not throttling, exactly, but it does mean the Nano may not hit the quoted 1,000MHz ceiling at all times. AMD says that’s intended – the point of the Nano is to fit comfortably into smaller rigs, both in terms of heat and power usage.

Like the Fury X, the Nano boasts a trio of DisplayPort outputs, and a single HDMI port. That’s a fairly standard set of connections for high-end cards, and most cards leave out the DVI ports now. Unlike the Fury X, the R9 Nano only requires a single 6-pin PCIe power connector. That’s a nice benefit for system builders who have tight limitations on power plugs and capacity.

When it comes to performance, the R9 Nano doesn’t have a lot of competitors with which to butt heads. The closest to it in terms of form factor is the Nvidia GTX 970 Mini, a half-length card that also requires just one 6-pin PCIe power connection. AMD provided us with the Asus DirectCU Mini GTX 970 for testing, and it retails for $360 at most retailers. That’s well less than the Nano’s MSRP of $650.

Because of its high price point, we’ll also be comparing the Nano to AMD’s Radeon R9 Fury X, and Nvidia’s GTX 980 Ti. Because of its stature, we don’t expect it to keep up with those cards, but it will give us an idea of the performance you’re sacrificing for a smaller footprint.

Our first benchmark is something of a warm-up round for these cards, but it gives us some real comparable numbers to start off with.

The 970 Mini comes in about 20 percent behind the Nano, at just over half the price. The gap between the high end cards is much lower, with just over 10 percent between them. While the Nano is the slowest, the gap is small enough that it’s hard to make a definitive conclusion from this single test.

Suffice to say, all of these high-end cards are more than capable of handling most modern games at 1080p with the settings cranked all the way up. The only exception to that is Crysis 3, a game that still humbles the most bravado gaming machines.

The biggest takeaway from this first round of testing is that you don’t need to spend a lot to handle modern games at 1080p. You’ll rarely come across a game with any of these cards, and a decent processor, that won’t let you turn up the settings to your heart’s content. In fact, a lot of these cards are overkill.

But you probably already know that. If you’re looking at the Nano or any of its competitors, it’s because you want to play games at 4K. AMD itself touts the card’s ability to handle many games at UltraHD resolution. Is the Nano really up to the task?

Unfortunately, the answer is an unenthusiastic “kinda.” The little guy tries hard, but ultimately doesn’t experience a considerable performance jump over the half-as-expensive 970 Mini. For a 20-percent increase in 4K performance over the 970 Mini, you pay an 85 percent higher price. Granted, the 970 Mini is only like the Nano in price, and the most apt comparison might be found right within the Nano’s family.

What about the Fury X?

Despite some shortcomings in terms of real-world performance, the Nano claims a moderate victory in value when compared to the Fury X. If you’ve decided AMD is the path for you, and money is no object, these are the two cards vying for your attention. Despite your size and power requirements, the choice isn’t as clear cut as you might think.

The Nano’s size is supposed to be its strength, but small cases have room for large cards.

Our 4K gaming tests show the Fury X is about 13 percent faster than the Nano. That’s a noticeable margin, but not a huge gap. Especially when a single card will still have you just short of that 60 frames per second goal that’s less relevant on 4K displays, which often sport higher refresh rates. All of the cards we tested, including the Fury X and GTX 980 Ti, require a few concessions if you intend to play games at 4K and 60 frames per second.

Choosing the Nano means you’ll have to dial settings back a bit for smoother gameplay, but it’s cooler, more efficient, and easier to install than the Fury X. If you’re thinking of a multi-card Crossfire setup, multiple Nanos would fit even in standard ATX cases, whereas more than one Fury X would be complicated, with each having its own radiator and fan.

Bust out the gaming headphones – they’re all noisy

As fans start to move further towards silence, other noises that components make become more noticeable. That’s a particularly bad problem with the R9 Nano, which insists on singing you the song of its people as you play. Its coil whine (a high-pitched electronic noise) ranges from a low whirring to a screeching whistle. It doesn’t show up on our decibel meter, but it can be clearly detected over the hum of the rest of the machine, and rest assured you’ll hear it as you play.

It’s not alone. All of the cards on this list were noisy in terms of coil whine, even if the fans were quiet. The only card that exhibited detectable levels over the background noise in our testing lab is the Fury X, but it only came up to about 41 decibels when under heavy load. Coil whine was less of an issue in cases with few fan mounts through which it could escape, and very noticeable in enclosures that have many fan mounts.

In terms of power, the Nano also demands less than other cards, but the difference here isn’t a noticeable one. The peak power draw of our entire system with the Nano was 300 Watts, up from 250 with the 970 Mini, and the Fury X only brought that number up to 350. Our whole system power draw with the 980 Ti installed brought the maximum wattage up to 400, and with a 6700K on board, that’s still a low enough power draw for even Mini-ITX power supplies.

The R9 Nano is a novel idea for a card. It’s built on the theory that gamers want a card with high performance in a small package. Whether that’s true or not remains to be seen, but either way, the R9 Nano is unlikely to satisfy those in the market for it. The performance is lacking at its price point, and the power and noise benefits of the smaller card aren’t as dramatic as you might hope.

If you just need a 1080p display, this gaming monitor from Acer does the trick without breaking the bank.

Don’t forget the peripherals! This keyboard and mouse set from Cooler Master is well-priced and colorful.

Just because your GPU has a fan doesn’t mean you can ignore the CPU, and Skylake chips don’t come with coolers.

Graphical performance is only part of the equation, you need fast, reliable storage as well.

Part of the problem is that full sized gaming rigs are quickly becoming more efficient in terms of space and power efficiency. Even cutting-edge cards like the GTX 980 Ti and Radeon R9 Fury X cut down on the demands of their predecessors while improving performance. On top of that, most of the popular mini-ITX cases that the Nano targets already support full-length cards and ATX power supplies, so there’s little reason to pay twice as much for the size reduction.

If you really need to cut back on power, the same test system with a GTX 950, which costs less than $200, was able to run Battlefield 4, Heroes of the Storm, and GTA V, at 1080p with the settings turned all the way up, and didn’t break 200 Watts. The Nano appeals to users who want 4K gaming, but like other cards in the price range, can’t entirely handle 4K gaming on its own.

So who is the R9 Nano really for? It’s likely to pop up in machines owned or built by those with deep pockets – ultra high-end home theater setups, or a flashy custom case build where graphics performance is key, but so is the size of the card. For the rest of us, who just want a normal sized computer to play games, a full-length cards is a better value.

AMD may be working on a monstrous dual-die GPU