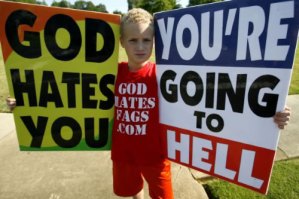 Westboro Baptist Church (WBC) is not a target of Anonymous, according to a new press release by the elusive hacker group. In fact, says Anonymous, the open letter that targeted Westboro Baptist was actually written by the church itself — not Anonymous — in order to gain publicity.

To recap: Late last week, an open letter addressed to WBC appeared on the Anonymous website AnonNews.org declaring all-out war on the Kansas-based congregation for their homophobic and hate-fueled protests, which often target the funerals of homosexuals and fallen US soldiers.

“We, the collective super-consciousness known as ANONYMOUS – the Voice of Free Speech & the Advocate of the People – have long heard you issue your venomous statements of hatred, and we have witnessed your flagrant and absurd displays of inimitable bigotry and intolerant fanaticism,” the letter reads. “We have always regarded you and your ilk as an assembly of graceless sociopaths and maniacal chauvinists & religious zealots, however benign, who act out for the sake of attention & in the name of religion.”

The letter goes on to declare all-out war on WBC, saying that if the church does not comply to demands to shut down their websites and fully cease and desist operations, Anonymous will incur “irreversible” damage to WBC and its congregation.

Westboro Baptist quickly responded to the letter posted on AnonNews with their own, surprisingly hilarious, open letter, telling the hackers to “bring it.”

“A puddle of pimple-faced nerds organized under the cowardly banner of ‘Anonymous’ claim they plan to hack Wesboro’s Websites,” the WBC letter says. “…Bad miscalculation, girls!”

As you might guess, the letter goes on to say, “God will defeat your council; your efforts will fail,” etc, etc…

Problem is, Anonymous apparently didn’t write the original letter threatening WBC. According to an Anonymous press release posted to AnonNews on February 20, the “Operation Westboro” letter was actually written and posted by WBC in an attempt to draw more attention to itself.

Anonymous — which has successfully waged cyber-attacks against Visa and Master Card, as well as the governments of Tunisia, Egypt and Yemen — goes on to warn fellow members not to attack Westboro Baptist’s web properties because it’s just “a trap.” To the media (us), Anonymous says that, “just because it was posted on AnonNews” doesn’t automatically mean it’s Anonymous-sanctioned.

While the hackers deny declaring this attack, they do leave the option of a future battle open for consideration:

“We are not BAWWWING sissies, nor are we afraid of your false god; we’re just really busy,” says the press release. “Stay tuned, and we’ll come back to play another day. We promise.”

Best Gaming PC Deals: Save on RTX 3070, 3080, 3090 PCs
The 6 biggest problems with ChatGPT right now
Pro users are already unhappy with the upcoming Mac Pro
How to schedule an email in Outlook
15 years later, the MacBook Air could soon have its best year ever
How to watch Super Bowl 2023 on your computer
Microsoft Word vs. Google Docs
Turns out DirectStorage isn’t killing frame rates in Forspoken after all
Best laptop deals: Save on Apple, Dell, HP and Lenovo
Wi-Fi not working? Here’s how to fix the most common problems
The best Chromebooks for 2023
Best microSD cards in 2023: top picks for your computer, camera, or drone
The best game-streaming services for 2023