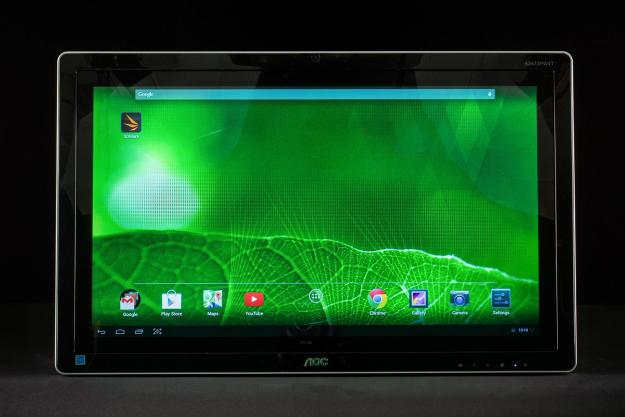 “Inexpensive and boasting a quality display, the AOC mySmart A2472PW4T succumbs to a series of unusual design choices.”

Android is a free, open-source operating system, so we expect devices running it to be cheaper than similar devices running paid operating systems like Windows. All-in-ones have disappointed us in this regard, however, with prices that usually match their Windows competitors. Acer’s TA272HUL, which sells for more than a grand, is the worst offender, but Asus and HP also sell tiny, modestly equipped systems for $400 or more.

AOC’s awkwardly named mySmart A2472PW4T is a contender, though. This 24-inch system provides a 1080p IPS touchscreen, an Nvidia Tegra 3 quad-core processor, and 2GB of RAM for $499 – according to the MSRP. In reality, the system sells online for a tad under $400, making it by far the least expensive Android AIO we’ve reviewed.

$400 for a 24-inch Android AIO with an IPS touchscreen seems like a good value, as some 24-inch touchscreen monitors sell for similar prices. However, AOC is not a well-known brand, and doesn’t have a strong reputation in the United States. Let’s see if this is an underdog worth rooting for.

Slim bezels have become a common trait on modern systems, whether they’re laptops or desktops, but AOC never received the memo. The mySmart A2472PW4T (which we’ll shorten to the mySmart from now on) actually has two bezels. One frames the the display, and another inside the frame surrounds the screen itself.

This adds up to almost two inches of unsightly black plastic on all sides. A bit of silver trim attempts to class up the system, but any hint of extravagance it adds falls away once your fingers meet the mySmart’s frame. While the back feels firm, the bezels flex at the lightest touch. We maneuvered the AIO gingerly while moving it between tests, for fear that one of the bezels could crack.

A kickstand props the system up on your desk, offering a decent amount of incline. This means the display can be reclined for easier touch use while standing or leaning over the device. No other ergonomic features are available, as with most all-in-ones, but AOC does provide a VESA mount if you wanted to use an external support. That’s something buyers can’t take for granted.

Reflections make the display annoying to use in a bright room, even when the backlight is at 100 percent.

AOC states the mySmart comes with four USB ports. This is technically true, but it’s not the whole truth. Two of the four ports are not “normal” USB 2.0; one is the big Type-B port that’s now rarely used, and the other is mini-USB. We think AOC should disclose this in its specifications, as consumers who see “four USB ports” on paper are sure to assume they’re all the standard connection.

Other connections include a headphone jack, microphone jack and mini-HDMI. Around back there’s Ethernet, HDMI-in, VGA and an SDHC card reader. 802.11 b/g/n and Bluetooth are built in, too. This is not a bad array of options given the price, but the USB kerfuffle takes the shine off what we’d normally report as a positive.

The AOC mySmart supports HDMI-in, which means it can be used as a Windows monitor. We tested it as such, and found that it offers good, if not outstanding image quality. The maximum contrast ratio of 630:1 matches the out-of-the-box performance of the Samsung S27D390H, an affordable monitor we loved, and the maximum brightness of 248 lux is respectable. We also recorded a color gamut that spans 98 percent of sRGB. That is better than the Samsung, Acer K272HUL or Dell P2314t.

In Windows, the viewing experience is solid. The only complaint we have is directed at the display’s glossy finish, which is virtually a mirror. Reflections make the display annoying to use in a bright room, even when the backlight is at 100 percent.

Switching to Android seemed to dull the experience even more, as if Google’s operating system wasn’t allowing the monitor to make full use of the gamut that it’s capable of. This was most noticeable in dark images, which looked a tad more washed-out than in Windows.

However it’s used, the mySmart offers a modest selection of adjustments via on-screen controls that users navigate with touch sensitive buttons. Contrast, brightness and gamma can be adjusted, though the Gamma presets are arbitrarily labeled. Users can also choose between a few color temperature options. Color adjustment is available, but only in a specific sRGB color mode, and even then is limited to red, blue and green.

Speakers are bundled with the monitor. While reasonably loud, they’re rear-facing, which means the majority of their power is directed away from the user. Volume is adjusted through the touch sensitive buttons, which is a bit confusing since they’re also used as on-screen menu controls.

Quick on paper – and only on paper

A look at the specs sheet grants the mySmart with impressive credentials. In addition to a quad-core processor, it boasts 2GB of DDR3 memory, which means it could (in theory) be quicker than most Chromebooks.

In practice though, the numbers don’t translate to real speed. We noticed consistent issues with lag from the moment we turned the device on. Menus and other interface elements often jerk across the screen, apps open and close hesitantly, and even key strokes from a USB keyboard are often delayed. The sum total of these problems is a disappointing experience that at times feels downright broken, as if a driver has stopped working, or a chip has overheated.

AOC needs to put in more effort if it hopes to be taken seriously in the desktop market.

We benchmarked the mySmart with the Peacekeeper Web browsing test, which returned a score of 642. That’s lackluster, as it’s behind virtually every modern smartphone and tablet on the market. An iPad Air, by contrast, scores around 1,800, and the Sony Xperia Z2 scores nearly 900.

To gauge the system’s graphics capabilities, we used 3DMark Ice Storm, a cross-platform benchmark that can be used with Android or Windows. This test returned a lackluster score of 3,661. A PC with Intel HD 4600 graphics, like the Lenovo C560 all-in-one, can score around 40,000. Even the Sony Xperia Z2 scores 18,751 on average (according to the Ice Storm benchmark database).

With this noted, graphics performance is adequate for HD video and for basic 3D games like Minecraft: Pocket Edition. Most titles on Google Play are 2D, and run without problems on the mySmart.

A little extra – or not

There’s also no bundled software worth mentioning. This is a mixed blessing. Android purists will enjoy the stock incarnation of Android 4.2 Ice Cream Sandwich, but the average user would be better served by apps that provide a better desktop experience. As it stands, using the mySmart is like using a gigantic tablet.

AOC enjoys a major price advantage over the competition. HP’s Pavilion 23t is usually $549, the Lenovo IdeaCentre C560 starts around $649, and the Gateway ZX4970 (which lacks touch) retails for around $499. The mySmart undercuts all these Windows AIOs by a substantial margin, and also beats Android alternatives like the HP Slate 21, which is $399, but possesses a smaller 21.5-inch screen.

All the goodwill gained by its price tag is wasted, however, by a series of baffling design decisions. Two of the four USB ports are not the expected variety, no keyboard or mouse is bundled, and build quality could be (much) better. Worse, performance is not what users are sure to expect from a system boasting of its “quad-core” swagger. Modern smartphones and tablets provide a smoother, more refined experience.

The silver lining to this cloudy all-in-one is its display, which provides strong image quality and a touchscreen experience at a low price. We can’t even recommend the mySmart as a monitor, however, because it’s too expensive, cheaply built, and ships with only a kickstand.

Attractive price aside, this all-in-one lacks the traits buyers will expect from a modern all-in-one computer. AOC needs to put in more effort if it hopes to be taken seriously in the desktop market.