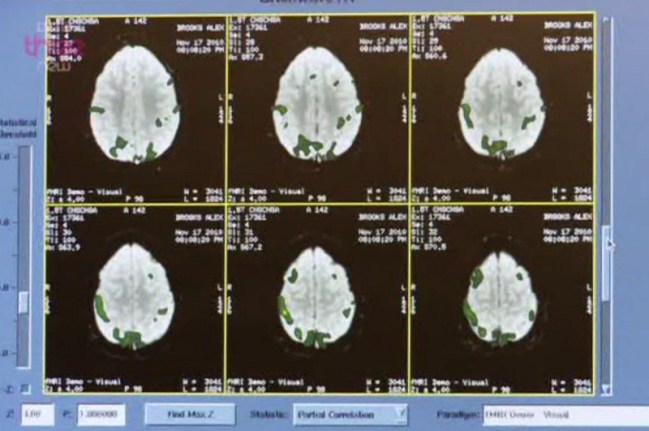 People have often talked about “the cult of Apple”, and if a recent BBC TV documentary is to be believed, there could be something in it.

The program, Secrets of the Superbrands, looks at why technology megabrands such as Apple, Facebook and Twitter have become so popular and such a big part of many people’s lives.

In the first episode, presenter Alex Riley decided to take a look at Apple. He wanted to discover what it is about the company that makes people so emotional. Footage of the opening of the Cupertino company’s Covent Garden store in central London last year showed hordes of Apple devotees lining up outside overnight, while the staff whipped up customers (and themselves) into something of an evangelical frenzy. This religious-like fervor got Riley thinking – he decided to take a closer look at the inside of the head of an Apple fanatic to see what on earth was going on in there.

Riley contacted the editor of World of Apple, Alex Brooks, an Apple worshipper who claims to think about Apple 24 hours a day, which is possibly 23 hours too many for most regular people. A team of neuroscientists studied Brooks’ brain while undergoing an MRI scan, to see how it reacted to images of Apple products and (heaven forbid) non-Apple products.

According to the neuroscientists, the scan revealed that there were marked differences in Brooks’ reactions to the different products. Previously, the scientists had studied the brains of those of religious faith, and they found that, as Riley puts it: “The Apple products are triggering the same bits of [Brooks’] brain as religious imagery triggers in a person of faith.”

“This suggests that the big tech brands have harnessed, or exploit, the brain areas that have evolved to process religion,” one of the scientists says. A meeting with the Bishop of Buckingham, who reads the Bible using his Apple iPad, appeared to back up this assertion. He pointed out how the Apple store in, for example, Covent Garden has a lot of religious imagery built into it, with its stone floors, abundance of arches, and little altars (on which the products are displayed). And of course, the documentary doesn’t fail to give Steve Jobs a mention, calling him “the Messiah”.

Secrets of the Superbrands also looks at the likes of Facebook, which has enjoyed phenomenal success in just a few years. “Like Apple, mobile phones and social networks offer an opportunity for us to express our basic human need to communicate. And it’s by tapping into our basic needs, like gossip, religion or sex that these brands are taking over our world at such lightning speed,” Riley says. He concludes: “That’s not to say that clever marketing and brilliant technical innovation aren’t also crucial, but it seems that if you’re not providing a service which is of potential interest to every one of the 6.9 billion human beings on the planet, the chances are you’re never going to become a technology superbrand.”

Apple Mac mini M2 buying guide: don’t make this mistake
How to sync your Outlook calendar with an iPhone
Best MacBook Deals: Save on MacBook Air & MacBook Pro
Here’s why Apple’s VR headset may become an ‘expensive flop’
GPU prices and availability (February 2023): how much are GPUs today?
The best PC power supply for 2023
ChatGPT has a new way to detect its own plagiarism
Samsung Galaxy Book 3 Ultra vs. MacBook Pro 16-inch
The Galaxy Book 3 Ultra is Samsung’s most powerful laptop ever
Nvidia may have another monster GPU in the works, and the price could be outrageous
AMD’s Ryzen 9 7950X3D pricing keeps the pressure on Intel
What is ChatGPT Plus? Everything we know about the premium tier
ChatGPT Plus to bring priority access during peak times — at a hefty price