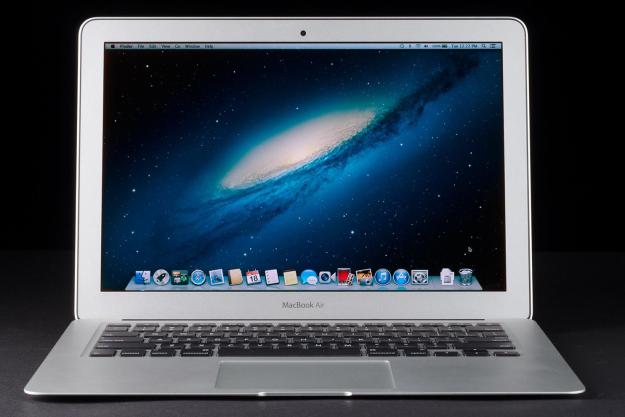 “The 2013 MacBook Air is still a solid laptop, but it's no longer the obvious choice. This entry-level Mac is hard to recommend to anyone except consumers who want OS X but can’t afford a Pro.”

Apple’s WWDC 2013 gave us a revised MacBook Air, but the revision didn’t go as far as expected. Retina, considered an obvious upgrade by some, didn’t make its way to the Air, nor was the chassis itself redesigned. Instead, Apple has just upgraded what’s inside.

“Just” may be too weak of a word, however, because the hardware update consists of Intel’s new Haswell architecture and the 4th-generation Core processors based on it. The Apple MacBook Air was the first laptop on the market to offer a dual-core 4th-gen processor, and, at the time of this review’s publication, still has few PC peers.

While the new architecture is the Air’s most significant update, it’s not the only one. Apple also dropped the 11-inch model with 64GB drive in favor of an 11-inch model with a 128GB drive (without increasing the price), and also lowered the price of the 13-inch Air to $1,100, a price drop of $200. Though perhaps not innovative, this is still significant, as computers rarely receive new hardware and a price drop simultaneously.

Then again, the lowered price may be necessary. The design of the current Air dates all the way back to late 2011. Can Apple’s aging laptop keep up with the latest Ultrabooks?

You’ve seen this before

Though Apple changed the internals, the 2013 model is aesthetically no different from previous years. The laptop’s simple, silver exterior remains among the most elegant in the business, and the chassis tapers forward to a sharp, definitive point. Give the Air a few moments on a grinder and you’d be able to dice vegetables with it.

The Air’s age is starting to show, however. When unboxed this laptop from the rear and momentarily thought we’d picked up a Pro with Retina by accident. Less than a tenth of an inch separates the maximum thickness of the 13-inch Pro with Retina and the 13-inch Air, and while the latter does taper to a much thinner edge, the difference between them is no longer impressive. More importantly, the Air no longer feels remarkably thin next to PC competitors like the Acer Aspire S7 and Dell XPS 13.

Apple’s design also lacks the “wow” factor that used to separate it from the pack. When the original MacBook Pro and Air hit the market, they re-invented how a premium laptop should look and feel. Now, several years later, the competition has caught up. Most Ultrabooks offer a similar look and similar quality.

Connectivity is an area where the Air clearly lags behind the competition. Only two USB 3.0 ports are available, along with a combo headphone/microphone jack, a Thunderbolt port, and an SD card reader.

There’s nothing about the Air that’s explicitly bad, but there’s far too much about it that’s merely “meh.”

Thunderbolt technically is a great addition, but device support remains somewhat limited. Fortunately, the port can be used with HDMI and DVI displays via an inexpensive adapter.

Good keys, but the touchpad surprises

The Air’s keyboard isn’t the best available, but it defeats most Ultrabooks on the market. Key caps are large, key feel is above average, and there’s good separation between each individual key. OS X provides an edge by enabling useful shortcuts that simply aren’t available on a Windows PC.

Backlighting is standard and works extremely well. There’s almost no light-leak from beneath the keys and brightness can be adjusted with excellent detail.

Past versions of this laptop have received praise for their touchpad, but it no longer feels particularly large, premium, or smooth compared to the best Ultrabook competitors. We’re still a fan of OS X’s gesture support, however, and the touchpad’s surface provides plenty of room to navigate via swipe, pinch, and waggle.

The MacBook Air 13-inch comes with a 1440 x 900 display. Though that’s a respectable resolution, most Ultrabook competitors above $1,000 now ship with a 1080p display, which puts Apple at a bit of a disadvantage. The difference in pixel density is noticeable in certain situations. Small font on a document or webpage, for example, often renders with a ragged, haphazard look.

Competitors caught up in image quality, too. Our normal benchmark won’t work with OS X, so we can’t judge the display from a purely objective standpoint. Subjectively, however, the Air lacks contrast and suffers from limited viewing angles. The display’s saving grace is brightness, which can be turned up so high that outdoors use is possible (if not enjoyable).

Audiophiles won’t be pleased with the Air’s sound system. Though generally clear, deep bass can cause distortion, and maximum volume is adequate at best. Anyone planning to watch movies or listen to music should buy a pair headphones or external speakers.

At a weight of three pounds, and with a thickness of up to 17mm, the Air is no longer the sultan of slim. Losing the crown does rob the laptop of something that made it special. At the same time, however, it’s not as if this system is chunky. In fact, most Ultrabooks are still a bit thicker and a bit heavier, despite the fact that Apple’s design has been on the market for almost three years.

Even with the price cut, the Air’s inferior display and merely adequate hard drive capacity hinder its overall value.

The 2013 model gained battery life – and a lot of it. Apple claims maximum endurance has made an incredible leap from seven to 12 hours, though that’s representative of a best-case scenario. The Peacekeeper browser benchmark ate through the Air’s battery in six hours and 45 minutes, which is about an hour and a half better than an average Ultrabook. Only Toshiba’s Kirabook and the HP Envy x2 last longer.

We were surprised to see our wattmeter report that the Air consumes 14 watts at idle (with screen at maximum brightness) and 34 watts at full load. These figures are worse than the average Ultrabook. Without another Haswell laptop to reference, we can’t be sure of why these results were so unimpressive, but we suspect either OS X power management or the display is to blame.

Our base model MacBook Air 13-inch boasts a Core i5-4250U processor, 4GB of RAM, and Intel HD 4600 graphics. None of our normal benchmarks work with OS X, so we loaded Windows 8 via Boot Camp to perform our tests.

SiSoft Sandra’s Processor Arithmetic benchmark came to a result of 39 GOPS, and 7-Zip turned in a final score of 7,174 MIPS. These numbers are adequate, yet a bit worse than the average 3rd-gen mobile Core processor. The i5-4250U’s low maximum clock speed of 1.9 GHz (with a base of 1.3 GHz) can be blamed. The Core i5-3427U, used in the previous Air, had a Turbo boost maximum of 2.8 GHz. That’s right; the new Air is slower than the old one.

PCMark 7 redeemed the processor by posting an excellent score of 5,144. Anything above 5,000 is extremely good, and the Air is only the third laptop – after the Kirabook and Sony Vaio T14 – we’ve tested to vault over that mark. The excellent score is largely propelled by the system’s astoundingly quick solid-state storage. Apple’s decision to ditch SATA hard drives may make its laptops more difficult to repair, but the performance benefit is clear.

The Air is also our first chance to test Haswell’s Intel HD 4600 graphics in a mobile format, and we’re happy to report IGP performance is strong. 3DMark managed a score of 4,492 in the Cloud Gate Bench and 774 in Fire Strike. These numbers represent a gain of over 50 percent compared to 3rd-gen Intel Core mobile processors with Intel HD 4000. Most games available for Mac will perform well on this laptop.

Past versions of this laptop have at times had issues with heat. That’s a thing of the past, however, as we never recorded an external temperature above 97.1 degrees Fahrenheit while stress-testing the new Air. More mundane use barely warms the laptop’s bottom, which makes it more comfortable to use in any situation.

The system fan doesn’t drone to cool the internals, either. At idle the fan isn’t loud enough to register on our decibel meter, and noise at full load reaches just 44.8dB. That’s noticeable, to be sure, but tolerable for most users.

The 13-inch Air’s new $1,100 starting price undercuts competitors like the ASUS Zenbook X31A-DH71 and Acer Aspire S7, but it puts Apple in an uncomfortable position. For the first time in years, the company is selling based on price rather than quality.

Even with the price cut, the Air’s inferior display and merely adequate hard drive capacity hinder its overall value. An Asus Zenbook may be $100 to $150 more (for the newest model), but it offers double the storage and a 1080p display. Then there’s Lenovo’s Yoga, which offers a convertible form-factor, superior specifications and a better keyboard at the same $1,100 price point. Or, consider the Dell XPS 13, which is much more expensive (with the 1080p panel) but boasts an amazing display and carbon fiber chassis.

There’s nothing about the Air that’s explicitly bad, but there’s far too much about it that’s merely “meh.” With the Apple’s own Pro with Retina now only slightly thicker, and numerous Ultrabooks available, this entry-level Mac has become hard to recommend to anyone except consumers who want OS X but can’t afford a Pro.

Topics
Video-editing app LumaFusion to get a Galaxy Tab S8 launch
All of Samsung’s videos from today’s Galaxy Unpacked event
The Galaxy Book 3 Ultra is Samsung’s most powerful laptop ever
Samsung Galaxy Book 3 Ultra vs. MacBook Pro 16-inch
Best HP laptop deals: HP Envy, HP Spectre x360, and more
Experts fear ChatGPT will soon be used in devastating cyberattacks
Lenovo’s Surface-style Chromebook just got a big price cut
Save $620 on this Lenovo gaming laptop with an RTX 3070
AMD vs. Intel: which wins in 2023?
Dell is having a big sale on business laptops — up to $2,500 off
Ends soon: sign up for NordVPN today and save up to 62%
New AMD laptop CPU destroys its predecessor, winning by 90%
Lenovo is practically giving away this 2-in-1 Chromebook today