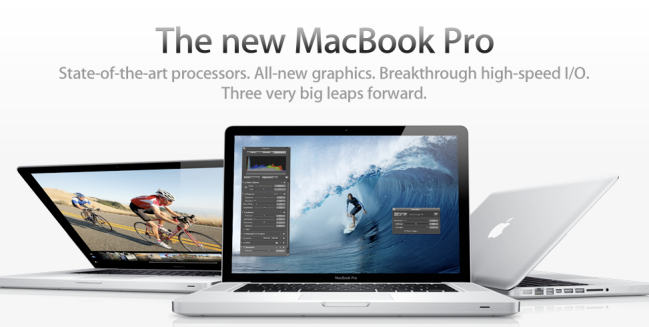 As expected, Apple today updated its 13-, 15- and 17-inch Macbook Pro models with dual-core and quad core processors, making the new lineup up to twice as fast as the previous generation.

Apple has also included a built-in FaceTime camera in all of the new models to support the video calling service that was introduced last year with the iPhone 4. FaceTime is included in the new generation of Macbook Pros. Users of other Intel-based Macs can now purchase the program through the App Store for $0.99.

The 13-inch Macbook Pro features Intel Core i5 and Core i7 dual-core processors up to 2.7 GHz and Intel HD Graphics 3000 with 384MB of DDR3 SDRAM. The 15- and 17-inch models feature quad-core Core i7 processors up to 2.3 GHz and AMD Radeon HD graphics processors with up to 1GB of video memory.

Don’t look for a complete re-design in the new lineup: the aluminum unibody and its associated components appear to remain unchanged from the previous generation.

Topics
We now know how Apple’s VR headset may handle video, and it’s pretty awesome
Best Apple Deals: Save on AirPods, iPads, MacBooks and more
What MacBooks needs to learn from competitors about transparency
Apple Reality Pro: everything we know about Apple’s VR headset
You’ll be surprised how cheap this 27-inch QHD monitor is today
Best HP laptop deals: HP Envy, HP Spectre x360, and more
The first RTX 4080 laptops are much cheaper than we expected
Intel targets RTX 3060 takedown with Arc Alchemist price cut
Perfect for school, this 14-inch laptop is discounted to $150 today
One of the best HP laptops you can buy is $250 off right now
Samsung’s 49-inch Odyssey G9 gaming monitor is $600 off today
GPU prices and availability (February 2023): how much are GPUs today?
The best PC power supply for 2023