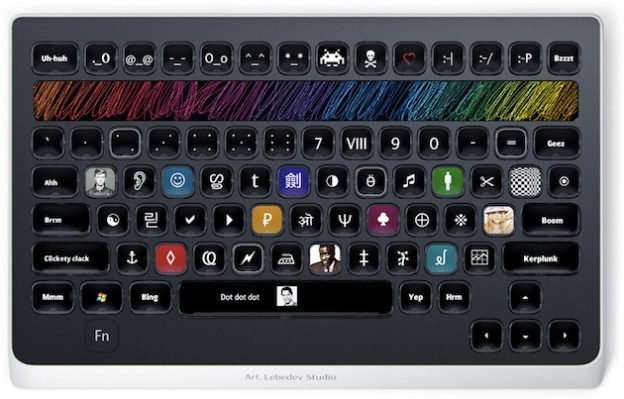 Art Lebedev, the Russian design studio behind the Optimus range of LCD keyboards, has made a new model available for pre-order on its site.  The Optimus Popularis is a more compact version of its full size models, such as the original Maximus we reviewed way back in 2008, but still boasts the same impressive level of customization.

Here’s how it works: Each key has a tiny 64 x 64 pixel LCD display beneath a plastic cover that can be configured to show almost anything you like, from different languages, individual words or symbols, to specific functions for complicated software packages such as Photoshop, shortcuts or oddly, even pictures of Britney Spears.

The Popularis introduces a second LCD screen running below the function keys, which in the promo images displays local weather, stock prices and some performance figures for your computer.  Although it’s not stated, we’d imaging it’s as customizable as the keys, too.

To go along with the Popularis, a smaller auxiliary keypad has also been launched.  The Mini Six has six individually programmable LCD keys and is designed to be used primarily for shortcuts.  Both the Popularis and the Mini Six are compatible with Windows and Mac OS X, and are programmed using Art Lebedev’s Configurator software.

Sound good?  Well, wait until you hear the price before getting too excited, as the Popularis will set you back $1,086 and the Mini Six a not inconsiderable $376.  There’s no denying that’s a serious amount of cash, but you are getting a serious amount of cool in the deal, not to mention the potential for saving yourself a lot of time if you do regularly switch between keyboard layouts, or need endless shortcuts for work.

Both are available for pre-order via Art Lebedev’s website now.