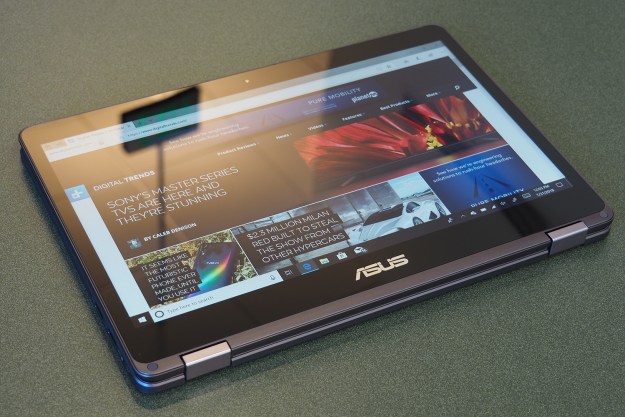 “The NovaGo performed poorly, but battery life and ubiquitous internet show off its promise.”

Microsoft’s Windows on ARM initiative is meant to directly challenge smartphones and tablets that offer all-day battery life, instant-on responsiveness, and always-connected cellular internet. The first round of machines based on Qualcomm’s Snapdragon 835 system-on-chip (SoC) has arrived, and we took a look at the Asus NovaGo, a convertible 2-in-1 version, to see if Windows on ARM is a viable platform.

Asus sent us the only retail configuration with 6GB of RAM, 128GB of eMMC storage, and a 13.3-inch Full HD (1,920 x 1,080 or 166PPI) IPS display, all of which sells for $700. We also received a Verizon LTE SIM to use in our testing, which allowed us to carry the notebook around with us and connect wherever we ended up. But does its Qualcomm processor perform well enough to keep up with its Intel-based competition?

Just because you’re “only” spending $700 doesn’t mean you should settle for an ugly device. Asus clearly gets that and offers solid design across its budget models. The NovaGo is a good example, with an attractive and conservative silver-gray color scheme with chrome accents. It’s not as stylish as the Asus ZenBook UX330UA, our favorite budget notebook, but it looks nice all the same.

Its build is solid, with an all-aluminum chassis that resists flexing and bending along the lid, keyboard deck, and bottom. The 360-degree convertible design works well thanks to a hinge that is stiff enough to hold the display in place whether in clamshell, tent, presentation, or tablet mode, but is easy enough to spin around. Just like the ZenBook UX330UA and the similarly priced Dell Inspiron 13 5000 2-in-1, the NovaGo doesn’t force users to choose between durability and price.

We should also note the NovaGo’s completely fanless nature, thanks to the ultra-low-power ARM processor. The notebook was never more than mildly warm, which is an advantage over Intel-based fanless notebooks, and it was silent.

Asus offers solid designs across its budget models, and the NovaGo is a good example.

The NovaGo’s connectivity is old-fashioned for such a modern machine. You’ll find two USB-A 3.1 Gen1 ports and an HDMI port to go along with the LTE SIM slot, 3.5mm combo audio jack, and proprietary charging port. Wireless connectivity is provided by 2×2 MU-MIMO Wi-Fi and Bluetooth 4.0 radios, along with the cellular connection if you buy a plan from a carrier.

One of the NovaGo’s best features is the LTE SIM slot, which lets you stay connected to the internet no matter where you go. Being able to use the notebook untethered from Wi-Fi is a huge advantage when traveling. You can sit down and access the internet anywhere your cellular service offers coverage.

The keyboard isn’t up to snuff

Asus makes some very nice keyboards but reserves the best for the company’s most expensive ZenBooks. The NovaGo’s keys are mediocre, meaning it’s an island keyboard with a slightly mushy feel. The key mechanism has only a bit of snap to it, and its bottoming action is soft. Unfortunately, the keyboard isn’t backlit, which is a disadvantage. Even budget 2-in-1s and laptops usually offer that feature.

The touchpad, on the other hand, is large and smooth. It’s also a Microsoft Precision touchpad, so it provides precise and reliable support for Windows 10 multitouch gestures. The buttons have a responsive clickiness but aren’t too loud. Of course, this is a 2-in-1, so the touch display is responsive and works well in any of the notebook’s four modes. There’s no pen support, however.

Windows 10 Hello support is provided by a fingerprint scanner that’s embedded in the touchpad, — not our favorite place. It worked well, though, and we had no issues with its reliability.

The NovaGo ships with a 13.3-inch Full HD screen (1,920 x 1,080 resolution, or 167 pixels per inch). Unfortunately, we couldn’t get our colorimeter to connect to the NovaGo, likely because its drivers aren’t compatible with Windows on ARM devices.

Still, our eyes told us the display was dim, which might be a problem. The NovaGo is portable, so you’ll be tempted to use it in bright rooms or even outdoors. Contrast and color accuracy appeared acceptable, though, with strong photo and video quality.

It’s an average display on balance, but good enough for the usual productivity tasks. And you’ll find audio quality to match, with decent volume and a hint of bass at lower volumes. You’ll want to use headphones for serious listening sessions, but the speakers will do in a pinch.

The Qualcomm Snapdragon 835 found in the NovaGo is known to performance well in phones and tablets, but Windows 10 is a heavyweight operating system that was designed with fast, power-hungry Intel CPUs in mind. Asus ships the NovaGo with Windows 10 in S Mode, which supposedly helps performance, but it’s easy to switch to Windows 10 Pro.

The one word that came to mind in describing the NovaGo’s performance was “sluggish.”

We used the NovaGo in both modes, starting out in S Mode and then switching to Windows 10 Pro. In S Mode we could only run apps from the Windows Store, which effectively meant Windows 10 apps and the Microsoft’s Office. That severely limited our ability to benchmark the NovaGo, as our usual benchmark apps weren’t available in S Mode. Still, we can describe the experience in one word. Sluggish.

Whether we were browsing with Microsoft’s Edge, using the mobile or ported versions of the Office suite, or running Windows 10 apps like an RSS reader, email, and OneNote, the NovaGo felt slow. It was usable, but preferable? Nope.

Windows 10 Pro further slowed the experience. Legacy apps – that is, apps not written specifically for Windows 10 — were a few steps behind on the NovaGo compared to its Intel counterparts. Google Chomre is one such app. Using it with only a handful of tabs was a clunky experience that we doubt most people would find acceptable.

The NovaGo could only complete one of our benchmarks, Geekbench 4, and there the notebook scored behind similarly priced Intel machines. Its single-core score of 893 and multi-core score of 3,123 were roughly half the Snapdragon 835’s performance on smartphones, and they’re several times slower than a laptop with a current-generation Intel Core i5 mobile processor.

We tried running the 32-bit version of Handbrake, which we use to evaluate a notebook’s performance on more demanding tasks, but it consistently crashed during the video encoding process.

The NovaGo’s universal flash storage (UFS) drive is another bottleneck. In the CrystalDiskMark storage benchmark, the NovaGo was around the same speed as SATA solid-state drives (SSDs) in reading data, but less than half as fast in writing data. Of course, it was dramatically slower than PCIe SSDs. Slow storage likely contributed to the notebook’s sluggishness.

The NovaGo uses the Snapdragon 835’s Adreno 540 GPU, which provides good gaming performance on Android smartphones – but we held no illusions that would translate to Windows.

We weren’t surprised when the NovaGo scored a paltry 499 on the 3DMark Fire Strike synthetic benchmark. That’s roughly half the already low score achieved by notebooks with Intel integrated graphics.

Less demanding games like Rocket League will launch on the NovaGo, but it might be better if they didn’t. Loading times could be measured in minutes and performance once running was in the teens. It was so slow, in fact, that we couldn’t measure it. Our benchmark tools refused to work properly.

The NovaGo packs in 52 watt-hours of battery capacity, which would be average for a similarly priced Windows 10 notebook. Given the Snapdragon 835 and a Full HD display, however, we fully expected battery life to be a strength.

As it turns out, the NovaGo is truly an all-day, and then some. It aced all our battery tests, turning in numbers that similar Intel-based notebooks can’t match. The only benchmark we could run in Windows 10 in S Mode, which is supposed to offer efficiency advantages, was our video looping test, and the NovaGo did well. It lasted 15 and a half hours before shutting down.

Windows 10 Pro didn’t diminish the battery life. The NovaGo churned through our most aggressive Basemark web benchmark test for a solid 10 hours. That’s a new record, and twice as long as the ZenBook UX330UA.

The NovaGo also excelled in our web browsing test that loops through a series of popular sites, though it lasted only 11 hours, which is four hours less than it did under Windows S Mode. Still, only the Dell XPS 13 and Microsoft Surface Book 2 13 come close to the NovaGo’s endurance.

Real-world battery life is helped by the NovaGo’s power-sipping standby mode and instant-on responsiveness. We closed the lid at 65 percent battery life, then opened it well over twelve hours later to find 62 percent remaining. That’s a smartphone-like sleep mode.

Windows 10 on ARM isn’t ready for primetime, and the Qualcomm processor can be blamed. Battery life is excellent, but that doesn’t matter if performance – or compatibility – holds you back.

There are some other Windows on ARM machines that you can consider, including the HP Envy x2 and the Lenovo Miix 630. The NovaGo is the least expensive of the three, and performance is likely to be underwhelming on those other machines as well. You’d choose them, though, if you want a detachable tablet rather than the NovaGo’s 360-degree convertible 2-in-1 design.

You could also opt for a budget 2-in-1 like the Dell Inspiron 13 5000, which will run you $750 for a Core i5-8250U, 8GB of RAM, and a 256GB SSD. It offers similar quality, better performance, and shorter battery life. You’ll also be able to purchase a pen and use the Inspiron for taking notes, something the NovaGo doesn’t support.

The NovaGo is outdated right out of the box thanks to its already-obsolete CPU. It’s reasonably well-built, but with performance this spotty, you’ll be ready to move on to something else almost immediately.

No. Windows 10 on ARM is a great idea, and the NovaGo is a well-built notebook that lasts a long time on a charge. But its performance isn’t good enough for all but the lightest user, something that’s likely to change when the first Qualcomm Snapdragon 850 devices hit stores later in 2018.