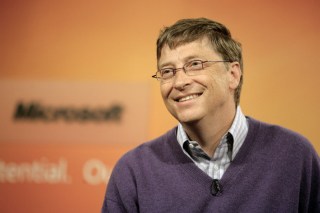 The selling off of five million shares by a single investor in one go might ordinarily raise an eyebrow, possibly two, but in the case of Bill Gates’ recent offload, observers’ eyebrows can stay firmly in position.

According to a report by the Guardian on Friday, the Microsoft founder sold the shares to help fund work carried out by the Bill & Melinda Gates Foundation, the organization he co-founded in 1994. A regulatory filing showed that Gates sold the shares on July 27, for around $27 each.

This latest sell-off comes in a year when Gates has sold some 90 million shares in total. According to Gates’ foundation, $42 million will be going to universities that will use it to finance the development of a special toilet – one that needs no sewer connection, water, or electricity to function – for use in countries with poor sanitary and hygienic conditions. Last year the foundation pledged £10 billion to make vaccines more readily available for children around the world.

If you think five million shares is a lot, bear in mind that the multi-billionaire founder of the Seattle-based computer giant still has a hefty 500 million left in the company, with Forbes magazine estimating the 55-year-old’s fortune to be in the region of $56 billion.

Aware that he can’t take it with him when the time finally comes for him to enter the great computer store in the sky, Gates has pledged to give away much of his money to good causes before that day arrives.

The Bill & Melinda Gates Foundation states its mission as being “dedicated to bringing innovations in health, development, and learning to the global community.” Bill Gates stepped away from the day-to-day running of Microsoft three years ago to concentrate on the work of the foundation.

Topics
Microsoft Word Free Trial: Get a month of service for free
How ChatGPT could help Microsoft dethrone Google Search
Microsoft Teams Premium uses AI to automatically recap your meetings
How to use the new communities feature in Microsoft Teams
Intel targets RTX 3060 takedown with Arc Alchemist price cut
Perfect for school, this 14-inch laptop is discounted to $150 today
One of the best HP laptops you can buy is $250 off right now
Samsung’s 49-inch Odyssey G9 gaming monitor is $600 off today
GPU prices and availability (February 2023): how much are GPUs today?
The best PC power supply for 2023
ChatGPT has a new way to detect its own plagiarism
Samsung Galaxy Book 3 Ultra vs. MacBook Pro 16-inch
The Galaxy Book 3 Ultra is Samsung’s most powerful laptop ever