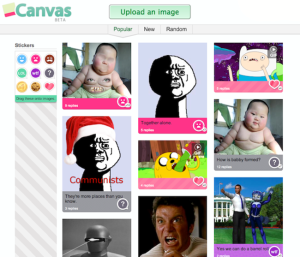 Notorious hacker-friendly hangout 4chan.org has long been the source of many of the Internet’s most famous memes. But now the site’s founder, 23-year-old Christopher Poole (aka “moot”), has made meme-making his official business with the beta launch of Canv.as.

Canvas, which is currently available by invite-only, allows users to upload content — for now, only image files — and discuss items uploaded by fellow users. Similar to 4chan, other users can then upload their own, often heavily-Photoshopped, versions to the site. More casual Canvas-ers (or at least those without a copy of Photoshop) can use in-site drag-and-drop icons, like “LOL,”  “WTF” or smiley faces, to add to the conversation. The content is then categorized by most-popular, newest or “random,” and tabs let users browse the site based on this criteria. “Our goal,” writes Poole on the Canvas blog, “is to create the best place to share and play with images.”

While images are the only type of content users can upload at the moment, Poole tells Techcrunch that other types of content, including video, audio and rich text, will eventually be integrated.

Unlike 4chan, however, Canvas requires people to create accounts, and the content is archived. But the accounts are anonymous, and require very little information to set up. Whether or not the added level of online posterity will prevent Canvas becoming the Anonymous clubhouse that 4chan is remains to be seen.

While Canvas may lack the fleeting nature of 4chan, it does provide something new: the ability to see the evolution of a meme, from original to its 10,000th remix. This is part of what Canvas is all about. “Content creation as a collaborative process,” Poole tells Mashable. “It’s not just the product that’s interesting — it’s that process.”

Canvan is currently only available to a few thousand users, but more will reportedly become available soon. So if you think you have the next Pedobear up your sleeve, perhaps Canvas will become your new outlet for Internet infamy.

How to install Windows on a Mac
The best Linux distros for 2022
How to remove the background from an image
How to download Windows 10 for free
SSDs could be as cheap as HDDs in time for Black Friday
These new Eero PoE devices are for serious Wi-Fi setups only
Google’s new privacy tool lets you know if your personal info was leaked
Nullmixer is a nasty, new Windows malware dropper
How to leave a team on Microsoft Teams
Nvidia addresses the rumors about the RTX 40 GPUs’ power consumption
Intel says Moore’s Law is alive and well. Nvidia says it’s dead. Which is right?
Best Microsoft Surface Pro deals for October 2022
Logitech’s new Mac accessories are customizable, functional, and undeniably pretty