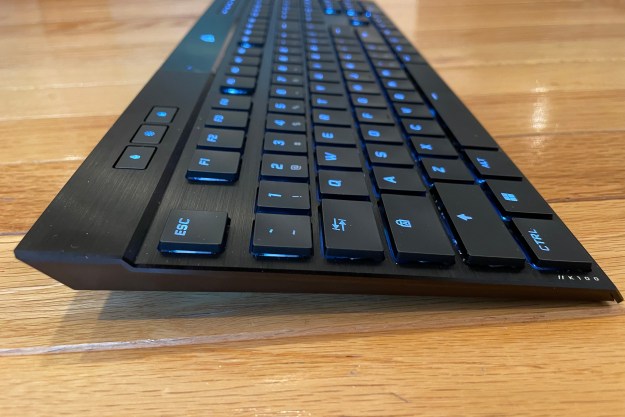 “The Corsair K100 Air Wireless boasts superb performance, but is far too expensive for its feature set.”

Smaller 60% or tenkeyless gaming keyboards have become popular in recent years, but there will always be room for a full-sized gaming keyboard that gives you every button or key you could ever need.

The Corsair K100 Air Wireless is an excellent mechanical keyboard in that vein, boasting superb performance and a slick design. At $280, though, it’s too high of a price to pay, especially when it’s missing some features we’ve come to expect at that price.

From a design perspective, the Corsair K100 Air Wireless is an attractive, low-profile keyboard. The keyboard itself is well-made and rigid, with no real discernable flexing despite being really thin. It inspires confidence that it’ll last for thousands of gaming sessions and workdays. Also, despite being a full-sized keyboard, it doesn’t take up more space than it needs to.

The K100 Air has all the usual keys you’d expect. The characters themselves are easy to read and are arranged logically. At the top are an array of buttons for controlling different features such as a brightness toggle, Windows lock key, media controls, and a very handy volume roller.

The lack of Mac-specific icons was an annoyance for me, but 99% of people buying this gaming keyboard won’t have that problem.

The K100 Air comes bundled with a nice braided USB-C to USB-A cable. Unfortunately, there isn’t a USB-C to USB-C option, so if you have a device with all USB-C connections (like a Mac or non-gaming laptop), you’ll have to buy an adapter if you prefer a wired connection.

I’ll talk about the iCUE software later in this review, but you’re able to configure a wide range of keyboard lighting effects and colors to your preferred style. The keyboard lighting itself is well-balanced for most keys. Some keys such as Home, End, Page Up/Down, and the rest in that group aren’t fully lit, with the edges of the words being a little dim.

I’ve personally owned the Logitech G915 Lightspeed gaming keyboard (the full-sized version), so I’m used to the feeling of low-profile keyboards. In fact, I tend to prefer those types of keyboards because I lean toward having shorter key travel.

Corsair is using Cherry’s ultra-low-profile tactile key switches, which are similar to MX Brown switches in feel. Those who are used to a tactile switch will feel right at home, but those who prefer other switch types are out of luck. There isn’t an option for linear or clicky switch options, which will disappoint many who prefer those types of key switches.

Let me start with what I liked about these low-profile switches. I tend to prefer linear switches, but the typing experience on the K100 Air was great. I was able to adjust quite well and felt no long-term fatigue or strain while typing. The key actuation (0.8mm) and travel (1.8mm) were satisfactory for my purposes.

Those who will be using this keyboard primarily for productivity tasks such as writing or coding will have no problems using these switches.

The Backspace, Enter, and Space bar keys are noticeably louder than the letter keys.

My primary gripe with these key switches is the sound. More accurately, the inconsistent loudness with the keys. Most of the keys deliver what you’d expect from tactile keys. They’re not as loud as traditional clicky (or MX Blue) switches. However, the Backspace, Enter, and Space bar keys are noticeably louder than the letter keys.

When you’re a writer (and programmer) like me, those three keys are essential in regular typing. Perhaps your tolerance level may vary, but I wished those keys were as (relatively) quiet as the other keys. Perhaps that was by design in order to audibly hear when you’re using those keys. In any case, it was a persistent distraction as I typed and so I have to point it out.

One big negative for many people will be the lack of replaceable switches. Unlike other gaming keyboards such as the ROG Strix Flare II Animate, you won’t be able to swap out the keys with one of your preference. In fact, Corsair told me directly that because of the construction of the switches, it’s very risky to remove the keycaps without damaging the switches.

Corsair is very proud of its 8,000Hz polling rate, similar to its K70 Pro Mini Wireless keyboard. Using the keyboard either in its wired mode or with its Slipstream wireless dongle allows you to access the higher polling rates (it defaults to 2,000Hz in wireless mode). If plugged into a gaming console (more on that later), it’s only able to go up to 1,000Hz.

I want to be able to say that I felt a difference between wired and wireless modes, but I didn’t. I tried it out with some Counter-Strike: Global Offensive, a game that can definitely benefit from that responsive, lag-free performance. I may not be the greatest shot in the world, but using the keyboard didn’t feel differently in either wired, SlipStream, or Bluetooth.

Most of the gaming I did was on my PS5. The K100 Air has a “PlayStation Mode” that allows you to connect to a PS4/PS5. No such mode was needed for an Xbox console. I played primarily on a wired connection, but you can also use the Slipstream wireless dongle. I didn’t feel any difference between wired and wireless mode playing first-person shooters like Call of Duty Modern Warfare and Destiny 2 (connecting over Bluetooth wasn’t available for PS5, unfortunately).

While I didn’t notice a real change, my favorite thing about this keyboard is being able to effortlessly pair to multiple devices at the same time. I plugged the Slipstream adapter into my Mac while keeping the wired connection to my PS5. The keyboard automatically switched to the PS5 while it was on and back to my MacBook Pro while the PS5 was off. You can’t use both simultaneously, obviously.

You’re able to save up to three Bluetooth profiles and switch between them using the Fn + Bluetooth button that corresponds to that device. That’s very helpful for people who have multiple devices and only want to use one keyboard. Technically, you can have five total devices connected (one wired, one Slipstream, and three Bluetooth).

Corsair’s iCUE software offers a veritable delight of features when it comes to customizability. I’m used to Logitech’s G Hub, but I appreciate all of the different options that iCUE offers.

I echo the sentiments in the Corsair K70 Pro Mini Wireless review in that iCUE allows you to basically rebind any key you want or create crazy RGB combinations if you want to make your keyboard look like fireworks. There are a number of options for making the keyboard function exactly how you want.

I will admit that I didn’t take full advantage of the ability to remap any key as most of the time I use the in-game settings to rebind game actions. I do appreciate having quick actions on my Mac’s status bar at the top. I’m able to change profiles and various settings like the polling rate without having to open the iCUE software.

There are four macro keys you can use, particularly for streaming purposes. You’ll have to download the Elgato Stream Deck software to actually use those macro keys, however. If you’re interested in streaming, it may be a decent way to set a few shortcuts, such as switching cameras or scenes in OBS Studio if you’re not already invested in Elgato’s Stream Deck hardware.

Finally, the keyboard has 8MB of onboard memory to store up to 50 profiles. That way, you don’t even have to use iCUE to switch between profiles.

This is where it gets a little tough to recommend. At $280, it’s definitely on the higher end of premium gaming keyboards, and there are other excellent full-sized mechanical keyboards such as the Logitech G915 Lightspeed gaming keyboard, which goes for around $230. That’s still expensive, but is a better deal considering what you’re getting.

The K100 Air’s super high polling rate is impressive on paper but doesn’t really make much of a difference in real-world use. The actual typing experience on the K100 Air is superb but could be a little too loud for some people who are sensitive to that.

The biggest fault, however, is the lack of options for key switches. I would have loved a K100 Air with linear switches, as I prefer the overall smoothness. Limiting the K100 Air to just tactile switches is a disappointing decision when other manufacturers offer choices.

If you’re invested in Corsair’s other products and want a high-end mechanical keyboard with ultra-low-profile tactile switches that offer excellent typing and gaming performance, then I would recommend it if it’s on sale. Otherwise, you’re better served with cheaper alternatives.