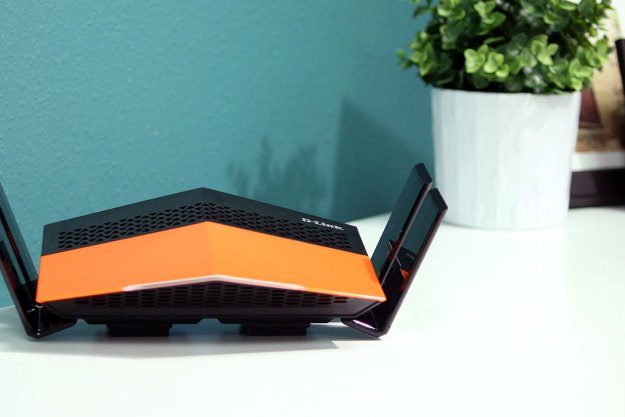 “The Exo AC1750’s performance should put it on your budget router shopping list.”

Despite the growing number of Wi-Fi enabled devices in our homes, most of us still use technology that was better suited for a time when only your laptop and smartphone needed to share the internet. That technology is called 802.11n Wi-Fi.

Now, it’s showing its age. 802.11n routers can quickly be brought to their knees during peak usage periods, leaving some devices to fight for bandwidth.  Most don’t see a reason to upgrade though, because a decent 802.11ac isn’t cheap.

Except the D-Link DIR-869 EXO AC1750. At $129, it’s affordable enough for many households. Yet it also promises strong performance and range. Can it really deliver so more, for so little?

A Focus On Design, But There’s Something Missing

Out of the box, the first thing you’ll notice is the design. The AC1750 looks just like D-Link’s higher end routers first announced at CES 2015 and updated right before this year’s confab, just orange and much smaller (only 10 inches wide and eight inches deep). We do wish they would have kept it the same shade of red as before  — orange is an odd color choice –but we can deal with it.

There’s no USB ports on this router, and we consider that a big oversight.

Design considerations aside, you’ll love the quick and easy setup. D-Link gives you the option to set up the router without a computer through its QRS mobile app (for both iOS and Android), but we picked the web setup, which was quicker. Your internet connection type should be automatically detected, as it was for us, so all you’ll need to do is select a network name, and you’re off.

The AC1750 supports Wi-Fi Protected Setup (WPS), and the setup button is located on the back of the router aside the four Gigabit Ethernet ports. Otherwise, you can spend much of the time you would have spent just setting up competitors’ routers to migrate all your devices over. We had everything done in less than ten minutes.

There’s one problem here. If your last router gave you the option to connect an external storage device or printer directly to it for sharing via USB, you’re out of luck with the AC1750. There’s no USB ports on this router, and we consider it a big oversight considering cheaper routers routinely offer this option. In other words, you’ll now need to share that through a device on your network, which is more difficult.

Impressive connectivity for the basics

The AC1750 delivers a lot of oomph for its size. There is a version of this router – the AC1900 — with 150 megabits per second more speed, but the extra $20 doesn’t seem worth it for such a meager speed increase.

The AC1750 will deliver up to 450Mbps on the 2.4GHz band, and 1,300 Mbps in the 5GHz band, according to D-Link. How you use that is up to you, but we’d recommend putting non-essential devices on the 2.4GHz network. This way you have the maximum amount of bandwidth for your mission-critical devices which should be 5GHz compatible.

For devices in our 1,500 square foot test home, the AC1750 delivered our full 150 Mbps down and 10Mbps up internet connection over Wi-Fi, even upstairs on the opposite side of the house. This was a four to five-fold increase in internet speeds over our previous Netgear N600 router for those upstairs computers.

Smartphone and tablet connections averaged around 65-80 Mbps throughout the house, and the PlayStation 4 in the same room as the router reported about 55-70 Mbps of throughput on the 2.4GHz band. All these devices saw a similar four to five-fold increase in speed, too.

Great range, but it has limits

The AC1750 impressed us with its range. It doesn’t have beamforming — a term describing how high-performance routers directionally transmit data to increase network performance and range to that device — but the AC1750 does fine without it. We had a connection everywhere on our 7,500 square foot suburban property on the 5GHz band, with at least 30Mbps of internet throughput to boot – much better results than the Zyxel AC2200.

While it doesn’t have the most network bandwidth, the AC1750 impressed us with its range.

Despite that range, the AC1750’s relatively slim bandwidth can work against it. During peak usage periods, there was lag and sluggishness present, but generally not enough to be show-stopping. Keep in mind we had two computers running – one downloading, one streaming — and a PlayStation 4 streaming Netflix simultaneously, so it’s understandable.

D-Link does provide easy QoS (Quality of Service) setup. You’ll need to enter your ISPs uplink and download speeds, and then drag each separate connection into a box. There’s one that will always be given highest priority, then a variable number of “high” and “medium” priority connections based on the number of devices connected.

Our usage case found no appreciable difference in employing QoS for our needs, however. Your result may vary, but it appears that the router’s QoS feature may not become relevant unless a very large number of devices are connected.

Turn off Smart Connect, but don’t fiddle with anything else

D-Link includes a feature that combines the 2.4GHz and 5GHz Wi-Fi networks into one with what it calls “Smart Connect.” With it activated, the router itself selects which band to deliver, based on the device.

We weren’t big fans of the feature, though. After experimenting with the feature we ended up leaving it off. Wi-Fi speeds were noticeably slower with Smart Connect, and we liked having more control over which device was connecting to which band, instead of the router choosing it for us.

If you need to change any other setting, the web-based administration panel is simple and easy to use. You’re likely not going to mess with most features except in special cases – such as website filtering and the option to enable guest access. With the AC1750, you can “set it and forget it,” which is why we like it so much for the everyday consumer.

The AC1750 comes with D-Link’s standard one-year warranty, which covers defects in workmanship and material under “normal use.” Any replacement part only carries a 90-day warranty, however.

We’ve reviewed Zyxel’s AC2200, but even with the fact that you can find it nearly as cheap as the AC1750 now at some retailers, it’s more difficult to set up, seemed to suffer from range issues, and has a bizarre design aesthetic. Linksys also does big business at brick and mortar retailers, but its AC routers even at a budget retailer like Walmart are either much slower, or don’t provide enough extra features to command a higher price.

That’s what makes D-Link’s $129 Exo AC1750 router so appealing. In addition to a very competitive price, setup is so easy you’ll be up and running in less than five minutes, and it has the best range of any AC router we’ve seen so far at this price point. It looks good on the desk to with a design reminiscent of D-Link’s highly acclaimed spaceship-like “Ultra Wi-Fi” line, especially if you appreciate a more modern décor.

The lack of a USB port is problematic, though, given printing and external storage use is more common than ever, and routers half the AC1750’s price have this. We see it as a big oversight, and something that could be a deal breaker for some.

The D-Link Exo AC1750 isn’t the fastest router out there, even for its price point. But with strong and dependable performance, as long as you understand the AC1750’s limitations, it’s a good choice.

Asus and Netgear probably offer the strongest competition. Both have routers, like the Asus RT-AC66R and Netgear R6400, which offer similar capabilities in this price range – with a USB port (or ports) included.

Do keep in mind though that the amount of network bandwidth you’re getting is pretty much at the low end of what’s out there, so while it’s firmware-upgradable, you’re not future-proofing for potential bandwidth needs down the road.

Buy this router if you’re living on your own or have a small family with basic wireless needs and looking for great range at a low price. Don’t buy it however if you have a larger family, or have very demanding network needs. You’ll need to purchase a more expensive, higher-bandwidth router for that.