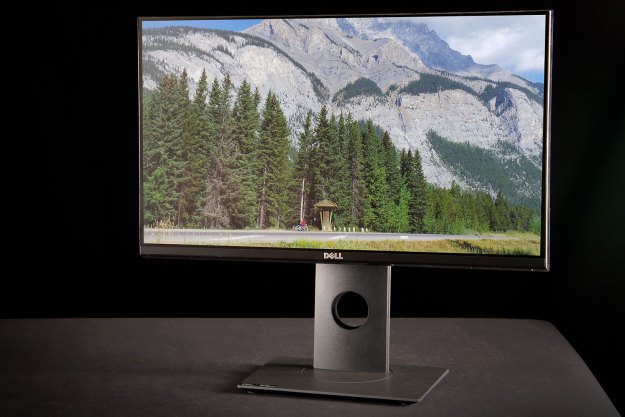 “The Dell S2417DG is a fast, gorgeous gaming monitor, especially after some tweaks.”

Right out of the box, the S2417DG looks like every other recent monitor from Dell. It’s the same competent, workplace design that you’ve seen a thousand times. Seriously — stand it up beside any other Dell monitor from the last couple years, and it’s nearly identical.

There are some improvements to the overall design. It has a razor-thin bezel, the frame is flush with the screen, and ports are a little easier to access. But other than that, it looks like the same monitor Dell’s been making for the last few years.

Until you turn it on. This is a 24-inch monitor running at 1440p, which is not entirely uncommon, but relatively rare in the 24-inch market. The result is a screen that is uncharacteristically clear and sharp. But for gaming monitors, sharpness is only one side of the equation. How does Dell’s latest stack up to the competition?

Check out those serifs

This is a gaming monitor, but it cannot be overstated how great text looks on this screen. It’s not just sharp, it’s liquid smooth and inky, without being blurry. With a pixel density of 146 PPI, pixels are indiscernible at arm’s length, even when you get your face right up into the monitor it’s tough to see any jagged edges.

Boring windows and web pages look fantastic. The narrow bezel and flush frame give menus and control panels the illusion that they’re just a part of the monitor, sliding in from the edge of the screen. The MacOS menu bar and Windows 10 notification panel look great, which is admittedly a weird thing to compliment.

The S2417DG’s refresh rate can keep up with the fastest video cards.

Those aren’t the kinds of features that make monitors fly off the store shelves, but they’re worth mentioning for the S2417DG because they are eye-catching and remarkable in a mundane sort of way.

Even the built-in settings menus are worth mentioning. The buttons are hidden under the front lip of the monitor, but they slide into existence at the slightest touch. There are some preset color schemes for particular kinds of games, and RGB levels you can tweak, but they’re missing some important features like hue, saturation and other advanced settings.

That’s not too unusual. Such adjustments are usually the territory of high-end monitors that target video and photo professionals. Still, it’d be nice to see such customization available.

That’s enough about text and menus, these tack-sharp details and crystalline colors are the result of the S2417DG’s pedigree as a gaming monitor.

Washed out of the box

Before calibration, the S2417DG leans toward the yellow end of the spectrum. Blank browser tabs or empty Word documents are particularly guilty. They look tobacco-stained. Even if you’re not looking for it, you’re likely to notice how some shades of white are just slightly off, and bright, light colors will bleed into each other. There’s clearly some work to be done there.

The average color difference, pre-calibration, comes in at 2.4. Using this metric, a lower score is better, while a score under 1.0 is near-perfect. It’s not uncommon for Dell monitors to have mediocre color accuracy out of the box. Even this monitor’s larger cousin, the S2716DG, scored a 3.01 with factory settings, and later improved to a 1.23 after calibration.

Gamma settings were pretty spot on. The monitor scores a 2.2 right out of the box – the sRGB standard. That means images should look as bright as they’re meant to.

The contrast at max brightness came in at 500:1, which isn’t great. Coupled with the factory default color inaccuracy, you can start to see why this monitor looks a bit off before calibration.

For the most part, the factory defaults really do this monitor a disservice. Which is a shame, because otherwise the screen looks fantastic. It’s sharp and clear, even if colors are kind of a mess.

After calibration, a different monitor appears

Post-calibration, things start to look up for our scrappy little S2417DG. Color gamut is okay, as the monitor’s only capable of rendering around 98 percent of the sRGB scale, and even less – 76 percent – of the AdobeRGB scale, but most competitors land in a similar range.

By comparison, you can see here that the Asus PG279Q surpasses both this monitor and its larger cousin, the S2716DG, in contrast and color gamut, delivering more colors, and rendering them with greater contrast than either of the Dell monitors.

On the last graph, you can see where the Dell monitors really show their true colors. The S2417DG is neck-and-neck with its larger cousin, scoring a solid 1.27 color accuracy after some calibration, while the Asus is left in the dust with a score of 2.17.

So again, it’s worth your time to tweak your desktop and monitor settings if you want to get the most out of the S2417DG.

It’s a pain, and you’ll probably have to tweak these settings more than once to get them just right. But as we found out, it’s worth it. We highly recommend digging into your color settings because once you’ve got it tuned, this monitor comes to life.

Until recently, 60Hz was the gold standard for refresh rates — meaning a monitor could refresh 60 times per second, keeping pace with games running at 60 FPS.

Now, however, 144Hz monitors are becoming more and more common, and the S2417DG is one such monitor. With Nvidia’s G-Sync and a refresh rate of 144Hz, the S2417DG is built to keep up with games played at extremely high framerates and provide silky-smooth gameplay.

Overwatch really made this monitor sing, and the S2417DG never missed a beat.

Naturally, Nvidia’s G-Sync only works with Nvidia cards (GTX 650 Ti Boost or later), but even if you’ve got a Radeon under the hood, that 144Hz refresh rate will help games feel smooth. You may just need to deal with some tearing.

Overwatch really made this monitor sing. It pushed the color fidelity and refresh rate to the limit, and the S2417DG never missed a beat. Not a single moment of screen-tearing or ghosting was apparent.

The real test, however, came when we tested it with visually darker games like Crysis 3 and Battlefield 4. In dark, rain-slick environments, colors were vivid and blacks were appropriately deep. Even bright lights shown in contrast to dark areas failed to produce any noticeable color aberration or fringing.

It’s worth mentioning that we ran these tests with both our pre- and post-calibration settings. The differences were startling. With factory defaults, Overwatch looked too-bright and washed out, and Battlefield 4 looked dull and drab. These problems were fixed after our tweaks.

The Dell S2417DG offers a standard three-year limited hardware warranty, with Dell’s Advanced Exchange Service for any returns or replacements.

The S2417DG is a good looking monitor if you’re willing to get elbow-deep in color settings. The high resolution and small form factor make for a display that is silky, crystal clear, tack-sharp, and lots of other superlatives. But without getting into those gamma, brightness, and contrast settings, the monitor just looks drab and washed out.

The Dell S2417DG retails for $500, but you can find it for a little less if you shop around. The larger, aforementioned Dell S2716DG and Asus PG279Q retail for around $800, or a little lower if you do some digging.

There are other monitors out there which look better and are less finicky, but very few which are in the same price range, or available in this smaller size. Remember, 24-inch with 1440p resolution are rare, so the S2417DG’s quirks might be worth it if you want an ultra-sharp display.

The build quality available here is really superb. The frame is almost entirely plastic, but it feels solid and doesn’t have much flex. It’s sturdy, and the display panel itself feels appropriately hefty. A highly adjustable ergonomic stand is included. It’s safe to say the S2417DG will last a long time.

As with any monitor, you have to weigh your needs against what the S2417DG offers. It’s a 24-inch monitor with a 1440p display for $500 — or a little less if you shop around. It’s not a budget monitor, and it’s not going to be the cheapest 1440p display you can find, but it does offer a high refresh rate and G-Sync compatibility.

Given the S2417DG’s price, performance, and clarity, it’s a good deal even though it has some eccentricities. As long as you don’t mind spending some quality time with your new monitor, it can give bigger, more expensive monitors a run for their money.

Topics
The best touchscreen monitors in 2023
The best Dell laptops for 2023
The best gaming PCs for 2023: Dell, Origin, Lenovo, and more
The best monitors with speakers for 2023
The Galaxy Book 3 Ultra is Samsung’s most powerful laptop ever
Nvidia may have another monster GPU in the works, and the price could be outrageous
AMD’s Ryzen 9 7950X3D pricing keeps the pressure on Intel
What is ChatGPT Plus? Everything we know about the premium tier
ChatGPT Plus to bring priority access during peak times — at a hefty price
Usually $3,879, this Lenovo laptop is down to $1,479 today
Get this Asus gaming laptop with an RTX 3060 while it’s $400 off
All of Samsung’s videos from today’s Galaxy Unpacked event
Best 2-in-1 laptop deals: Save on Dell, Lenovo, HP and more