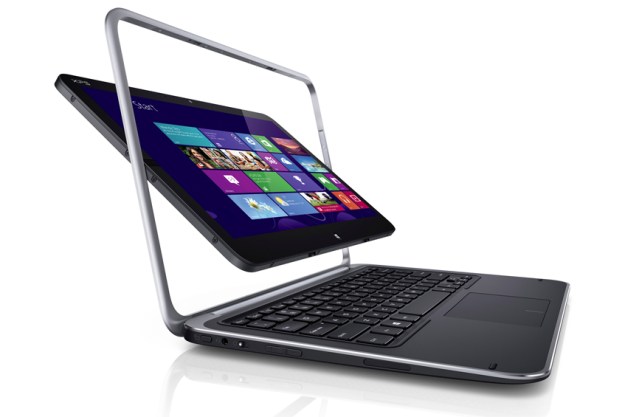 “The XPS 12 absolutely nails the fundamentals of display, endurance, and interface. We would be eager to recommend this device even if it were only an Ultrabook. The ability to turn it into a tablet is just a bonus.”

There’s a ton of new convertible tablet PCs now on the market, or soon to be – yet most of them require compromise. Lenovo’s Yoga is neat, but the keyboard can get in the way of tablet use. Dockables, like the Asus Vivo Tab RT, either rely on a small display or have to skimp on hardware to fit everything in the tablet part. And more traditional twist-hinge convertible tablets are often heavy, bulky, or both. What’s the uncompromising buyer to do?

Dell thinks it has the answer with the new XPS 12. Its hardware is standard Ultrabook (our review unit arrived with a Core i5-3317U and a solid-state drive), but it can convert into a tablet by flipping the display. And we do mean flip – it turns 180 degrees within its frame. Flip, close, and ta-da! It’s a tablet.

It sounds like a good idea, but what looks great on paper doesn’t always work out in practice. Let’s see if the no-compromise approach works.

Telling the XPS 12 apart from the XPS 13 or 14 is difficult at first glance. They all make use of a black-and-silver design language that manages to be practical and elegant, though also a bit dull. A closer inspection reveals that this laptop has a larger display bezel and a thicker display lid than its cousins, though the overall package remains very compact.

The main event is the rotating display. Only the silver metal frame remains stationary. Everything else flips. Dell secures the display during normal use via a pair of clips and a magnet. This mechanism remains sturdy while the device is used as a laptop, but it’s easy to accidentally activate when closing the lid.

Dell’s current line of XPS Ultrabooks is built better than any other laptop the company has produced, and this machine is no exception. Panel gaps are nearly invisible, material quality is excellent, and the chassis allows for little flex.

Connectivity is a weakness, however. There are two USB 3.0 ports, Mini-DisplayPort, a combo headphone/microphone jack, and a card reader. That’s it. We’d prefer to see HDMI and an extra USB port, even if it was only 2.0.

Light for a laptop, heavy for a tablet

Flipping between laptop and tablet use is a breeze. Dell’s design is clearly more convenient than Lenovo’s Yoga because it covers the keyboard, the transition takes a second, and the software responds instantly with a smooth animation. This is a slick machine.

As a tablet, the XPS 12 works … for a while. Touch input is buttery smooth, but there’s no way to disguise this device’s weight. Using the tablet for more than a few minutes at a time is uncomfortable if there’s nothing nearby to sit it on. Other convertible tablet PCs, all of which are heavy, share this problem. However, it’s particularly bad with the XPS 12. Dockable tablets don’t suffer from the weight issue as much since the keyboard (the brunt of the tablet) is removed when the tablet is separated from the keyboard.

Speaking of which, the keyboard is excellent. The layout feels a bit cramped at first (there’s no getting around the small display), but the palm rest is reasonably large and key feel is better than average. Backlighting is standard and well executed. Not including the off setting, there are two brightness settings that can be controlled via a keyboard shortcut.

Touchpad quality is less impressive. Dell’s efforts to seamlessly integrate the touchpad into the chassis have gone too far. We found it hard to tell when our fingers moved past its borders and also found that the touchpad had trouble registering a two-finger tap as a right-click. That being said, multi-touch zoom and scroll worked well.

A sight for sore eyes

Dell has put a stunning full 1080p and IPS display in the XPS 12, a combination that makes for a heck of a viewing experience. We found the display capable of 68 percent of the sRGB spectrum, which is higher than average. Our testing also discovered exceptionally low black levels. This results in a rich, pleasing display for both productivity and entertainment.

Gorilla Glass protects the laptop from scratches in tablet mode. That means gloss is the order of the day, which is countered with powerful backlighting. We registered a maximum of 318 nits, which is about 50 percent brighter than an average laptop.

All would be well if only Microsoft had planned better for high-resolution devices. Though Windows 8 does include ClearType and can scale text, it’s an inconsistent solution. We noticed that several of our benchmark programs suffered from blurry text because of scaling issue. Text never proved unreadable, however.

Sound quality is respectable. The speakers are quite loud at maximum volume, though they suffered from distortion. Turning the dial back a few notches produced a balanced, clear sound that was still loud enough for most environments. A pair of headphones is a big improvement, but the stock speakers will do in a pinch.

The XPS 12, like most Ultrabooks, trends towards the higher end of the temperatures we’ve recorded. At idle, we found that the laptop reached up to 94.7 degrees Fahrenheit along the top of the keyboard. Load testing spiked temperatures as high as 103.1 degrees Fahrenheit. Laptop use is comfortable only at low levels of load.

Fan noise is the beneficiary of these results. The laptop did not create noise above ambient at idle and only reached 48 decibels at load. These are good results for any laptop and are exceptional for one this thin and light.

One for the road

Portability in laptop mode is a strong point. Although the weight of about 3.3 pounds is not exceptional for this category, it is competitive. This, combined with its small footprint, makes the XPS 12 an able travel companion.

Some blame for the laptop’s weight can no doubt be directed at its 47Wh battery. This is the same size as those found in most 13-inch to 15-inch Ultrabooks and resulted in battery life of 1 hour and 58 minutes on our Battery Eater load test and a whopping 8 hours and 57 minutes in our low-load Reader test. We also recorded 4 hours and 48 minutes via the Peacekeeper browser benchmark. All of these results are better than average.

It’s not all about the battery, however. This laptop is also efficient. It draws only 12 watts of power at idle with the display at maximum brightness and consumes about 25 watts at load. It’s incredible that Dell has managed to keep power draw so low in a laptop packing a bright 1080p display.

The XPS 12 ships with a modest suite of pre-installed software, which includes Amazon’s Kindle for PC, Skype, and the Dell Store app. As with other Windows 8 PCs, this software shows up on the Start screen but does not appear on the desktop.

Surprisingly, there’s no third-party security trial installed. This is a wise choice by Dell, as such software tends to detract from premium PCs. The built-in antivirus provided by Windows 8 will prove adequate for most users.

As fast as it needs to be

Underneath its unusual exterior, this device is just another Ultrabook. Our review unit arrived with an Intel Core i5-3317U, 4GB of RAM, and a 128GB solid-state drive (of which only 103GB was available for use). These very modest specifications represent the most basic configuration available and leave the XPS 12 hanging around the middle of the pack.

Reaching a combined score of 35 GOPS in SiSoft Sandra’s Processor Arithmetic test, and managing a score of 7,154 in 7-Zip is adequate, but these scores are behind those of the ASUS UX32 and Lenovo ThinkPad X1 Carbon – both of which are non-convertible Ultrabooks with similar price tags.

PCMark 7, however, returned a record-breaking combined score of 4,677, meaning it’ll feel quick in day-to-day use. Samsung’s blazing-fast solid-state hard drive deserves almost all the credit for this result.

3DMark 06 and 3DMark 11 came to scores of 4,534 and 584, respectively. These numbers are in the normal range for an Ultrabook relying on Intel HD 4000 for 3D graphics. Many games will play on this laptop, but only at low or medium detail and at a reduced resolution. Intel HD isn’t up to the task of playing even a moderately demanding 3D game at 1080p.

Dell’s attempt to create a non-compromising convertible laptop works as well as we could have hoped. The XPS 12 absolutely nails the fundamentals of display, endurance, and interface. We would be eager to recommend this device even if it were only an Ultrabook. The ability to turn it into a tablet is just a bonus.

And we do mean just a bonus. Gravity is a cruel mistress that brings this device’s tablet aspirations down to earth. This device weighs too much to allow frequent or long-term use in tablet mode without a stand or piece of furniture to rest on. Tablet mode is great for quickly browsing the Web or watching a YouTube video with friends, but it’s no replacement for the real thing.

Surprisingly, this device offers a reasonable value. Lenovo’s Yoga 13 costs less, but it also provides less: fewer pixels, a slower default processor, and a smaller battery. Toshiba’s U925t is similarly priced but has a lower display resolution. Samsung’s ATIV Smart PC Pro 700T is the most convincing competitor, and it is sold at the same price, but we’ve yet to have hands-on time with it.

The XPS 12 is a convincing first step for premium Windows convertibles. Its weight prevents it from standing in for a dedicated tablet, but this potential flaw is saved by the device’s excellence as an Ultrabook. Any consumer interested in an Ultrabook or a convertible tablet should check out what Dell is offering.

Video-editing app LumaFusion to get a Galaxy Tab S8 launch
The best mesh Wi-Fi systems for 2022
The best cheap printers for 2022
MacBooks vs. Windows laptops: Here’s how to choose
The best 4K gaming laptops for 2022
Intel just accidentally leaked a mysterious 34-core CPU
SSDs could be as cheap as HDDs in time for Black Friday
These new Eero PoE devices are for serious Wi-Fi setups only
Google’s new privacy tool lets you know if your personal info was leaked
Nullmixer is a nasty, new Windows malware dropper
How to leave a team on Microsoft Teams
Nvidia addresses the rumors about the RTX 40 GPUs’ power consumption
Intel says Moore’s Law is alive and well. Nvidia says it’s dead. Which is right?