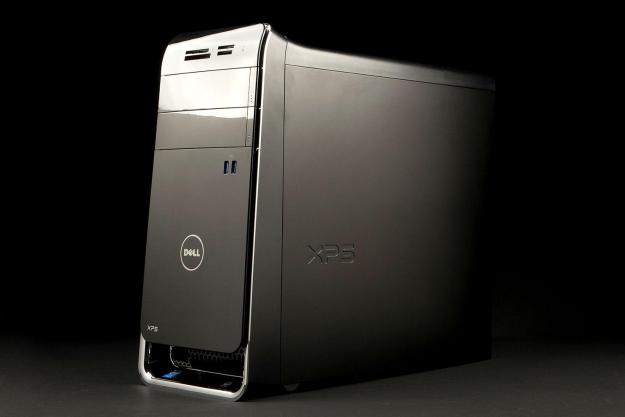 “A good selection of components, room for upgrades, and a 4th-gen Intel CPU make Dell’s XPS 8700 a nice family or dorm PC. We just wish it were a bit more configurable.”

Sure, Ultrabooks and convertibles are the hot new PC products on the block, but if you want the maximum amount of performance for the least amount of money, you may want to look elsewhere. Do you want a system that can grow with your needs, rather than being replaced every couple of years when the sealed battery stops holding a charge? If so, the traditional desktop tower still represents a great value.

And while it’s far from inexpensive in our $1,650 test configuration, Dell’s XPS 8700 Special Edition is a well-balanced performance desktop with a powerful brand-new Intel CPU, oodles of RAM, and a graphics card that will keep all but extreme gamers happy.

But aside from its (mostly) well-chosen components, does the Dell XPS 8700 Special Edition set itself apart from other towers, or blend in with the slew of other systems aiming for your computing dollar this back-to-school season? To find that out, of course, we’ll have to dig a bit deeper.

The XPS 8700’s glossy plastic front face isn’t going to win any awards for innovation or standout style, but with the honeycomb grille on the bottom and a bit of chrome bling, the tower does exude a bit of performance-forward class.

The design is also functional, with two blue USB 3.0 ports up front and a pair of USB 2.0 ports up top in a recessed tray that’s meant for storing, say, a charging cell phone. A headphone and mic jack are also here for easy access.

An optical Blu-ray reader drive (that also burns CDs and DVDs, but not Blu-ray discs) occupies the upper bay, while a lower drive bay sits empty, ready for a second optical drive or another bay device. And a four-slot card reader sits at the top of the tower, waiting to devour your digital images.

Around back, the port selection is a bit sparse by performance desktop standards, but there is one eyebrow-raising surprise. There are four more USB 3.0 ports and two extra 2.0 ports here (for a total of 10), as well as an Ethernet jack, and a quartet of video connectors on the graphics card. That’s definitely more generous than usual.

A blast(er) from the past

Below the graphics card sits another surprise, this time in the form of a Sound Blaster Recon3D sound card. Dedicated sound cards used to be very common. But the integrated audio circuitry on most motherboards has improved over the years, and sound cards have become pretty rare.

Still, if you have a high-end set of speakers or headset, the sound card is a nice bonus, which should deliver excellent audio. It sports a dedicated 600 Ohm headphone amp, two optical audio jacks, and connectors for 5.1 channel analogue speakers.

If there’s one thing that we’ve come to expect from big-box PC makers after years of reviewing their products, it’s that bundled peripherals are usually not great, especially when they’re of the wired variety. But that’s not entirely the case with the XPS 8700. With its flat, squishy keys, the keyboard isn’t great, but it is roomy and has dedicated media control keys.

The mouse feels more comfortable in the hand than many high-priced gaming rodents we’ve wrangled in the past.

The mouse, on the other hand, is, surprisingly, pretty darn good. Sure, it’s covered in glossy black plastic, but there’s an extra button on each side, along with the two main mouse buttons and a clickable scroll wheel. A button behind the wheel lets you adjust mouse sensitivity on the fly, with white LEDs along the top that illuminate to indicate cursor sensitivity – a handy feature for making those precise in-game sniper shots.

If you type a lot, you’ll probably want to replace the keyboard. The mouse, though, is a keeper. It feels more comfortable in the hand than many high-priced gaming rodents we’ve wrangled in the past.

A nice set of components

Getting inside the XPS 8700 is as easy as popping off a thumbscrew at the back of the case and tugging on a raised lip on the rear of the steel side panel. Inside, the core components are mostly well chosen for a balance of power and relative affordability. You get Intel’s new Core i7-4770 CPU, which represents the high end of the company’s new 4th-Generation Core (Haswell) processors.

In the $1,550 base configuration, you’ll get a dedicated Nvidia GTX 650 Ti graphics card. Our review system sports a $100 upgrade to the more powerful GTX 660 – a card better suited to playing today’s games at 1080p. But if gaming isn’t all that important, or you don’t mind dialing down resolutions, you can certainly skip the graphics card upgrade and still have fun gaming on the base configuration.

There’s also a 2TB hard drive here, paired with 32GB of solid-state cache, which speeds up boot times and the speed of commonly used programs. Still, given the price of this system, we’d rather see a real 128GB solid-state drive paired with a traditional hard drive for even speedier performance. You can get the XPS 8700 with a 256GB SSD, but you’ll have to step up to the $1,850 mid-range configuration to do so.

For those who don’t like Ethernet, there’s also an Intel Centrino wireless module on the motherboard, which adds Wi-Fi, Bluetooth, and Intel’s Wireless Display technology.

The only component in the XPS 8700 that doesn’t make all that much sense to us is the 16GB of RAM that comes standard. Even today’s demanding games generally don’t use more than 2GB, and Windows 8 runs well on 4GB. In most cases, you won’t use more than 8GB, even with several programs open and a dozen browser tabs loaded.

Generally, more than 8GB of RAM is only really useful if you’re running high-end content creation software and working with very large files, like hours of HD video. We would’ve preferred Dell stick with 8GB in the XPS 8700’s base configuration and instead make a solid-state storage drive standard.

Room for a few upgrades

If you’re looking to add more components to the system, either to carry over some old parts from your previous system, or to add more down the line, the XPS 8700 is reasonably accommodating. There are three unused SATA ports on the motherboard, and three empty drive bays (two hard drive bays and an optical drive bay). There’s also an empty PCI Express x1 slot with enough clearance between the graphics card and the sound card to slot in an additional expansion card. But don’t expect to turn this system into an extreme gaming machine, as there’s only a single graphics card slot on the motherboard, which is already occupied by the Nvidia GTX 660 in our review unit.

With its quad-core Core i7 CPU running between 3.4 and 3.9GHz (depending on the workload), 16GB of RAM, and solid-state SSD cache, the XPS 8700 is certainly no slouch in the computing performance department.

In our CPU and productivity tests, it performed mostly in line with the smaller, but pricier Alienware X51 micro gaming tower, which we would expect given both systems have the same processor. But in PCMark 7, which is designed to measure a system’s overall abilities, the XPS bested the X51 with a score of 6,137 to the Alienware’s 5,943.

The XPS 8700 isn’t designed solely to be a gaming rig, but it can certainly serve that purpose.

Switching over to the 3DMark graphics performance test, the Nvidia GTX 660 graphics card in the XPS 8700 serves it well, landing it an impressive score of 134,474 on the Ice Storm test. But the Alienware X51 was stocked with a slightly better graphics card (a GTX 670), giving it a score of 145,174 on the same test.

Still, the Alienware costs more in our review config, basically has zero room for upgrades, and has much louder fans, thanks to its small size. The XPS 8700 isn’t designed solely to be a gaming rig, but it can certainly serve that purpose. With the GTX 660 in our review unit, you should be able to play all of today’s games at 1080p resolutions, with in-game settings set to medium or high, depending on how demanding the title.

Aside from its mostly unnecessary abundance of RAM, the XPS 8700 Special Edition is a well-rounded performance desktop that’s a good fit as a family PC or a dorm-room power tower. It’s powerful enough to handle pretty much any task that you throw at it, from high-end media creation to high-resolution gaming. And its desktop form factor and upgradability mean it won’t have to be replaced as soon as one of the components gets too slow or fails.

But as much as we like the XPS 8700’s performance and don’t mind its looks, there’s also not really anything that sets it apart from similarly configured towers available (or soon to be available) from several other PC makers. So, you may want to shop around first before buying to make sure the XPS 8700 is the best deal when you’re about to buy.

There are three base models in the XPS 8700 Limited Edition line, with some configuration available on each system. But overall, the line isn’t as configurable as many we’ve seen in the past. So if you don’t want, say the dedicated sound card or so much RAM, you may want to look for a machine that’s more configurable. We’d certainly be happy to trade half of this system’s RAM and the dedicated sound card for a 256GB solid-state drive instead.

Intel Unison is yet another attempt to make PCs and phones work together
Nreal’s Air AR glasses head to the U.S., ready to rock with iPhones
Best gaming monitor deals for October 2022
AMD Ryzen 7000: Everything we know about Zen 4 CPUs
AMD Ryzen 9 7950X vs. Intel Core i9-12900K: Two flagships face off
AMD Ryzen 7000 vs. Ryzen 5000: specs, performance, and more compared
Apple’s October event may have been canceled before it began
Developer says it can turn your AMD 6800 XT into an Nvidia 3090 Ti
Best MacBook deals and sales for September 2022
Best gaming chair deals for October 2022
This new Windows 11 feature will help you protect your passwords
HP flash sale: Pavilion x360 2-in-1 laptop just got a $130 price cut
Save $550 on this HP gaming PC with an RTX 3070 today