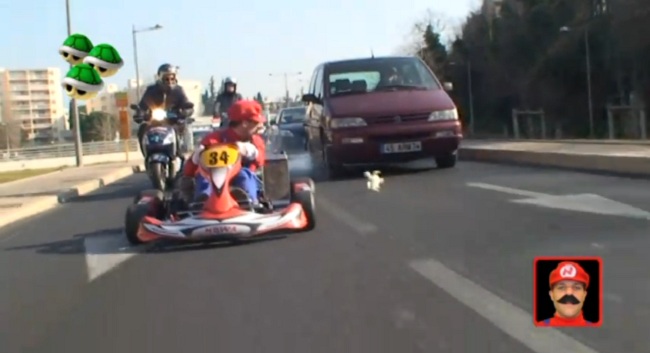 So, say you are a snowboarder with a camera crew and a  decent budget. Where do you go? Obviously, you head for some of the most remote and dangerous locations in the world that just happen to have snow. Check out the clip below, and beware the odd cuss word in the background as the crew question the sanity of the snowboarders. The film itself is due out in September.

In the following clip from a British nightly news broadcast, the littlest things can lead to the biggest slams. The burn is a fairly obvious one, but the look of hatred on the male victim’s face is priceless, as is the barely contained glee on hers.

French prankster Remi Gaillard has signed back in to the world of Mario Kart, and in the video below he can be seen playing the difficult “Paris” map. When not busy hucking bananas and turtles at cars trying to take the lead from him, Remi takes a moment to joyfully extend a greeting to the fine Parisian motorcycle police force.

Because sometimes a superhero needs love too, eHarmony has expanded its reach to include the admittedly small niche market of superheroes who are looking for a date. Typically a superhero ends up with a college/high school sweetheart, or perhaps another superhero (or supervillain in many cases), but sometimes that is just too much trouble. You want to go rescue orphans from a burning building, she wants to rule the world with a maniac efficiency and crush her enemies’ bones to dust. It can be stressful.

Your Mom May Hate Dead Space 2, but She Also Sucks At it

In order to promote the recently released game Dead Space 2, EA launched a bizarre advertising campaign where several sweet and wholesome middle-aged mothers were shown some of the more graphic scenes from the game. Naturally they freaked out, condemned the game, thought it was disgusting, etc., etc. The point was a somewhat outdated notion that gamers will be more into a title because it offends their mothers. It was a dumb idea, not to mention dated. But to follow that up, EA brought a pair of mothers back to try the multiplayer. Once the shock of the game wore off, the killer instinct took over.