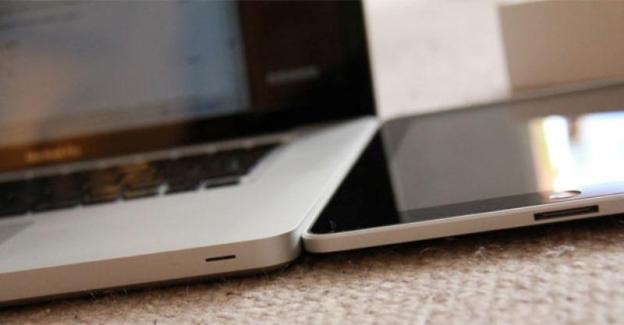 Tablets have been around only a short while and already they have transformed personal electronics. What once were a novelty have now entirely infiltrated how we interact with technology, and how we think about its evolution. Despite how relatively new tablets are to the tech scene, the argument over whether or not they will kill laptops is already pretty played out. But we had to let writers Jeffrey Van Camp and Nick Mokey take a stab at the undying debate.

Things are rarely this black and white, but if we say that laptops mostly killed off desktop PCs, then yes, I do think that tablet-like devices will mostly kill off what we’ve known as a laptop for the last decade or two. But it isn’t that simple.

Tablets are evolving to incorporate popular features of laptops like larger screens (Toshiba Excite 13) and keyboards (Asus Transformer), and laptop makers are doing their damndest to avoid termination by evolving laptops into something more like a tablet. Apple has lead the charge (proactively, I might add) with the MacBook Air, and now the rest of the industry is following suit. Laptops will soon have capacitive touch, solid-state flash storage, thin designs, and incorporate brand new operating systems like Windows 8, which have been built first and foremost for tablets.

With each month, those who own tablets are beginning to use them more and more. Eventually, I think laptops and PCs will be relegated to only the largest of tasks. If you need to edit video, play a powerful game, or do something extremely demanding, you may still use a PC, but in the years ahead, tablets are going to take over, along with smartphones. The PCs that do survive will barely resemble PCs at all. So yeah, in a way tablets and devices like them are killing laptops.

I can hardly disagree that tablets will become more and more prevalent as time goes on; we’re already seeing that borne out by the 67 million iPads Apple has managed to stuff into sweaty consumer hands within a couple years. But they’ll only supersede laptops in popularity if you take the lax view that all the “hybrids” we’re seeing should really count as tablets, which is a stretch.

If a tablet has a clamshell case and a keyboard, to me it might as well be a laptop. Sure, devices like Asus’ Transformer run Android, which carries some limitations, but fundamentally, it can do many of the same things as a laptop. When Windows 8 goes on sale in the fall, these hybrids will do everything a real laptop can.

So I guess what I’m really saying is: The laptop form factor will never die.

The “pure tablet” form factor is significantly limited, and the fact that we’re seeing laptops and tablets merge is evidence that an iPad-like device can never truly replace a laptop. You can’t type quickly enough on them. You can’t make precise selections in a program like PhotoShop. You can’t even prop them up without an accessory case that makes them – surprise – like a laptop.

Tablets have a time and place, but not as the dominant computing device of the future.

I think keyboards will continue to become more and more rare. You note that the Asus Transformer has a keyboard, but don’t forget that it’s detachable. Keyboards on PCs, like on phones, are going to become something we also just don’t need very much. Even upcoming computers like the Lenovo Yoga are de-emphasizing the keyboard by making the touchscreen much easier to use without it. Unless you are writers, like us, you just aren’t going to need a full keyboard. It’s going to become a hassle.

I wouldn’t want to do my job without a laptop, but I know a few people who are using tablets for everything now. If they want to type a novel, they have a Bluetooth keyboard and stand, but mostly, they use their tablet without those fancy gadgets. We can argue semantics, but the bottom line is that laptops cease being laptops when they start running on hardware and software that was designed for touch-based phones and tablets. The only thing a laptop will be to most people is an optional keyboard they can pull out in a pinch. The center of computing is moving toward the touchable screen. You can add or delete peripherals, but it’s fundamentally a different experience than the laptops we know today.

PhotoShop and most applications will be rewritten to work in a touch environment. It’s all changing. Microsoft Office has already made its first steps.

I don’t want to get mired in semantics either, but clearly terminology is important here. Kinda hard to argue about whether laptops are going extinct when we can’t agree what they are.

Is a keyboard the only dividing line between a tablet and a laptop? Right now, no. But when Windows 8 spawns a brood of laptops with screens that essentially snap off and act like tablets, yes: A keyboard makes it a laptop. How else will we draw the line between tablets and laptops at that point, when they both run the same software?

The point has been made before, but I’ll reiterate it: Computers are better for creating, tablets are better for consuming. As long as people need to create, keyboards will be essential. You and I may be writers, but nobody wants to process invoices, dump a bunch of data in Excel, or create a CAD model of a turbine on a tablet. Don’t use a computer to work? Everybody shares the need to write, even if it’s just tapping out long emails home to Mom and Dad from college.

Saying that tablets will replace laptops is like getting your first bite of a Big Mac and declaring grocery stores a thing of the past. Who needs bananas and cartons of milk when you’ve got greasy beef patties specially prepared to slide down your gullet, right? But sooner or later, your body is going to need a little more nutrition than cow throats spritzed with ammonia, and you’re going to need more software than Angry Birds and Flipboard.

Okay Nick. I don’t even like Big Macs, but if you’re really going to make a crazy comparison, then I’ll give you an accurate one. Laptops are the Big Mac in this equation and tablets are a regular cheeseburger. Sure, sometimes you’re going to really feel like you “need” an artery-clogging Big Mac, but let me tell you, a regular burger would satisfy your actual needs if you gave it a shot. So…there! Take that, metaphor, analogy man. I can litter my post with strange comparisons and references as well.

If you think that the only thing that separates a laptop (and thus, a PC) from a tablet is the keyboard, then so be it… Jedi.

Let me tell you how laptops are moving to the dark side. The entire workings of laptops and PCs are changing to new architecture (much of it based on ARM processors), adding capacitive touchscreens, shrinking and thinning down, becoming totally modular with detachable everything, fitted with completely new user interfaces, controlled by new things like voice and gestures, filled with new concepts like app stores, and a whole bunch of other crap. Before this is over, your “laptop” will not be a laptop. It will be a tablet with a keyboard. It will have more in common with my tablet kind than your pitiful band of PCs.

It is unavoidable. It is your destiny. Your laptops, like your PCs, are now MINE.

You don’t like Big Macs? That alone should be enough to disqualify you from this debate, Jeff Van Commy.

I concede this: The whole mobile ecosystem is melting down and swirling together right now. Like a melting pot. The melting pot that is America. You don’t hate America too, do you, Jeff? Because my ThinkPad is about as American as a Camaro IROC Z28. And you can pry it out of my cold dead hands along with the Colt 1911 I baked into an apple pie.

OK, OK, I’ll end this on a serious note. You can argue that laptops are becoming more like tablets, and I can argue that tablets are becoming more laptops, but either way, laptops aren’t going away. They’re morphing for the better, which is awesome. And if, at the end of the day, the worst thing we have to argue about is whether to call them tablets or laptops, that’s a future I’m happy to live in.