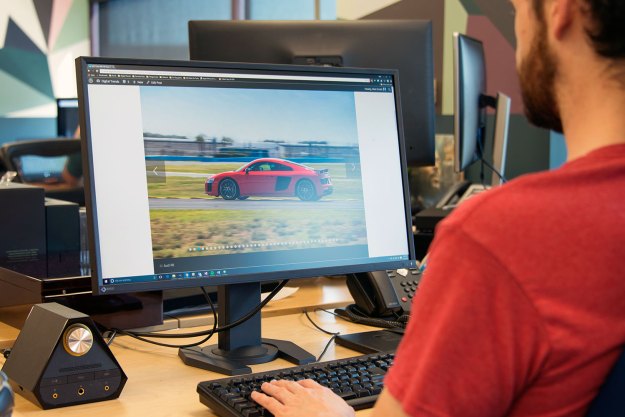 Eizo, a Japanese display maker, isn’t very well known in North America, but the company’s products have a reputation among those who care deeply about monitors, or need a serious display for work. Eizo’s ColorEdge and FlexScan monitors are a solid choice for photographers, video editors, and other professionals.

But the company isn’t all business. Its Foris line targets gamers, and the 27-inch FS2735 is the flagship. Its specifications include everything gamers want from a high-end monitor including 1440p resolution, an IPS panel, 144Hz refresh rate, and support for AMD’s FreeSync adaptive refresh technology.

The price, however, is shocking: $1,300. That’s as much as some ultra-wide monitors with similar features. Does the Foris FS2735 have an ace up its sleeve, or is it simply too small, and too expensive?

Gaming monitors tend to embrace garish design. That’s fine, but it can result in chintzy or overblown choices that doesn’t feel as luxurious as the price tag would have you hope. The Foris FS2735 side-steps that issue with rock-solid build quality. Yea, it’s made of plastic, like almost every monitor. But the materials are sturdy and firmly fastened. The matte black color scheme gives the display a reserved aesthetic, but a red racing stripe along the back gives away the monitor’s sporting intentions.

A sturdy stand with support for tilt, height, and rotation, comes standard. Competitors in FS2735’s price range offer similar adjustments, but the Foris has a slight edge because of its size. Somehow, the stand manages to keep the monitor in place despite a footprint that’s a third the size of those shipped with the Asus PG27AQ and Acer XB270HU. A VESA mount is included, if you for some reason don’t like the stand.

Controlling the monitor is a breeze thanks to a joystick along the bottom right corner of the display. The Foris FS2735 is designed for gaming, yet the monitor’s on-screen menu is robust. It offers precise adjustment of gamma, color temperature, color saturation, and color hue, in addition to the usual brightness and contrast options. These extras far exceed other gaming monitors, which usually offer one or two of these options, but not all of them.

The monitor also includes a pair of bundled speakers, though they’re so weak that we doubt anyone will want to use them.

Eizo does not claim to calibrate the Foris FS2735 from the factory, but its image quality is impressive right out of the box. The semi-gloss display hits a maximum luminance of 265 lux, yet offers deep black levels, resulting in a solid contrast ratio of 600:1. The color gamut spans 100 percent of the sRGB gamut, and the average color error came in at an incredibly low figure of 1.08. Anything below one is difficult for the human eye to recognize, so the Foris is very, very good.

The only off-note was gamma, which came in at a reading of 2.1 rather than 2.2. This slightly lower reading indicates the display looks brighter than it should, but only just.

No competitor can touch the FS2735’s out-of-the-box image quality. The much more affordable Dell S2716DG can match its contrast, but its average color error is three times higher. The Asus PG27AQ, a 4K display, can’t match the Eizo in contrast, color accuracy, or gamma. The Acer XB270HU scored a better contrast ratio of 700:1, but its color is less accurate, and its gamma too dark.

No competitor can touch the FS2735’s out-of-the-box image quality.

The FS2735’s strong numbers in objective tests translate to excellent everyday image quality. Game and movies look crisp, realistic, vibrant, and provide a sense of depth. This monitor is more often held back by the quality of source material than its own flaws.

With that said, the resolution is a downside at the Foris FS2735’s price. 1440p makes sense for gaming, but it’s available in competent monitors for half as much. At $1,300, this Eizo plays in the realm of 21:9 widescreens and 4K displays. Both offer a more immersive experience.

As mentioned, the monitor supports a maximum refresh rate of 144Hz alongside AMD FreeSync. These traits make for incredibly smooth gaming – provided your computer has an AMD video card, and can pump out frames quickly enough to feed the monitor. Even at lower framerates, though, the monitor handles motion well. There’s only a tinge of after-glow when bright objects move across a dark screen. This is a problem of IPS panel deisgn, and the FS2735 can’t tame it.

Like most excellent displays, the Foris FS2735 doesn’t benefit a great deal from calibration. It already meets most of our image quality targets, so there’s little room for improvement.

We did manage to put the gamma curve right on our target of 2.2, however. The FS2735 offers a number of precise gamma presets, but each proved a step higher than labeled. We had to set the gamma preset to 2.3 in order to produce the 2.2 reading we wanted.

The difference made by calibration was visible in direct on-off comparisons, but it would be hard to notice otherwise.

Eizo offers a five-year warranty and promises the display will have zero bright sub-pixels for the first six months of its lifespan. These terms are generous. Most competitors, like Acer and Asus, have three-year warranties.

Eizo’s Foris FS2735 has the best image quality of any gaming monitor we’ve reviewed. It has all the features a gamer desires, and combines them with excellent out-of-box image quality. This is not a monitor that you need to calibrate to enjoy. It looks great from the moment it’s turned on.

The $1,300 MSRP also puts the Foris in league with 4K monitors and 34-inch, ultra-wide gaming monitors, which offer greater resolution and a more immersive experience. At this price, gamers expect cutting-edge technology. The FS2735 instead refines what was considered great three years ago. It’s an awesome 27-inch display, but gamers with money to spend are moving on to bigger, more impressive screens.

That makes the Foris FS2735 a tougher sell than it should be. If you insist on owning the best 27-inch gaming monitor around, here’s your display. But damn, do you have to pay for it.