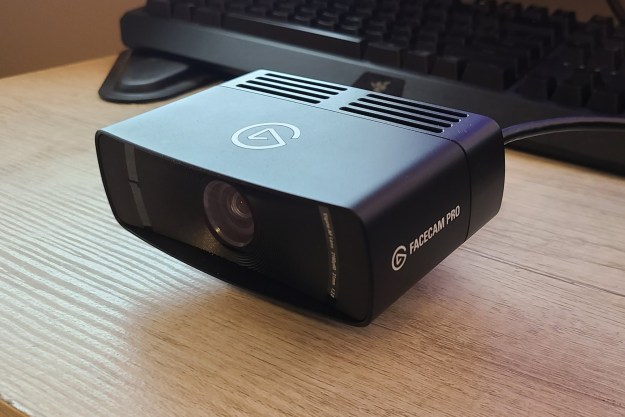 “The Facecam Pro is for content creators who want excellent production value for their streams and videos.”

I’m no professional streamer, but I know quality plays a big role in making even casual streams more enjoyable. If you’re a content creator chasing increasingly high production value, Elgato’s Facecam Pro might be what you’re looking for. Equipped with a sensor capable of 4K resolution and 60 fps, it’s one of the most high-end webcams you can buy, though at $299 it’s not cheap.

What Elgato promises with the Facecam Pro is loads of options, thanks to the webcam’s wide range of resolutions, auto- and manual focus, standard mounting, and other customizable settings. Although the moniker “Pro” is thrown around quite a bit these days, the Facecam Pro definitely earns it.

The Facecam Pro’s most noticeable characteristic is its size. At a width of 4.6 inches and a depth of 3.1 inches and a weight of half a pound (or 240 grams), it’s certainly the largest webcam I’ve ever seen. For comparison, Logitech’s 4K Brio webcam is much thinner, has much less depth, and is a fourth of the weight. Despite the Facecam Pro’s chonkiness, I was able to mount it on my relatively thin monitor without hassle. I was even able to mount it on my ROG Zephyrus G14, a 14-inch gaming laptop with an extremely thin display.

That said, I’m not sure if it would be able to stay there without slipping off on its own or causing the display to fall over. Thankfully, the Facecam Pro has a quarte-inch thread, a common thread that many cameras have so you can mount them on mounting equipment such as a tripod. This quarter-inch thread also opens up the possibility of using the Facecam Pro as a normal camera, though it does need to stay plugged into a PC as it can’t record footage on its own.

The Facecam Pro also comes with onboard memory, which allows customized settings to be remembered by the webcam. For instance, if you change the settings on your Facecam Pro and plug it into a different PC, those changes will remain. Although onboard memory will appeal primarily to those with multiple PCs, it’s also useful for retaining personalized settings after getting a new PC or reinstalling the OS of an existing PC.

The Facecam Pro comes with a single USB-C to C cable. Now, USB-C is great, and I much prefer it over Micro USB, which is what USB-C is replacing. The problem is that it’s C to C instead of USB-C to USB-A, the normal kind of USB. Nor is there a USB-C to A adapter included.

This could pose a problem for desktops, which often only come with one or two USB-C ports. Still, I’m happy Elgato made this a USB-C device, and if I ever wanted this to plug into a USB-A port, I just need to use a different cable.

The Facecam Pro relies on two key features for good image quality: 4K resolution at 60 fps and autofocus. You’re not likely to want or need 4K for streaming games due to bitrate limitations and practicality (face cams are often too small to benefit from higher resolutions), but it’s definitely useful for other content like videos uploaded to YouTube, for example. Autofocus is of course useful no matter what you’re recording.

But there are some valid cases where you might want a webcam capable of 4K even though you’re not streaming or recording in 4K. Even when there are bitrate constraints, higher-quality footage can look better than lower-quality footage, regardless of whether or not a video player says it’s 1080p or 4K. Furthermore, a 4K webcam will have much better quality if it’s zoomed in; even at 400% zoom-in, a 4K webcam has comparable quality to a 1080p webcam with no zoom-in applied. Whether you’re streaming or recording videos or sitting in a digital meeting, you might want to zoom in a bit if your webcam is far away.

Even if you’re not planning on using the 4K capabilities of the Facecam Pro, the fact that it has 4K is still beneficial because lower resolutions are downscaled from 4K. Compared to other 1080p cameras, including Elgato’s original Facecam, the Facecam Pro can look better even though the resolution is technically the same. It’s the same principle behind playing a game at a resolution higher than a monitor supports; even though most of the extra detail is lost, it still looks better. Whether it’s thanks to its downscaling algorithm or high-end Sony Starvis sensor, the Facecam Pro has noticeably improved image quality at 1080p too.

The Facecam Pro also doesn’t need studio lighting to avoid noise and graininess thanks to its f/2.0 aperture. I conducted my image quality testing at night with just an overhead light on and the noise was noticeable but not distracting. I still recommend pairing the Facecam Pro with a good lighting solution, however, just to get the most out of it.

Autofocus, the other big-ticket feature, is also quite good. Almost all of the time I was able to focus on my face clearly, and could quickly adjust whenever I moved. However, it wasn’t perfect; I experienced a couple of times where the Facecam Pro failed to refocus after I had moved, which required me to put my hand in front of the camera to try and get it to reset. But since I was messing around with customization options, it’s possible that was a rare glitch.

The settings of the Facecam Pro can be customized through Camera Hub, Elgato’s first-party app which can save custom settings on the webcam’s onboard memory. Here, you can change all of the important settings a webcam has: zoom, pan, tilt, focus, contrast, saturation, exposure, and white balance.

There are four presets for zoom, pan, and tilt settings, but if you want to make presets for this kind of stuff, you’ll probably want to use Elgato’s Stream Deck instead (either the app or the physical device), which can store much more than four presets. But if you’re looking for something simple, Camera Hub will do the job while providing a nice and modern-looking UI.

Officially, the Facecam Pro is only supported on Windows 10 and macOS 11.0, but everything worked fine on Windows 11 which is what my PC uses. It’s likely you can get the Facecam Pro to work on other operating systems, but without the full experience; at the very least, you wouldn’t be able to use Camera Hub on Linux without emulating it or running it in a virtual machine, for example.

As for third-party applications, the Facecam Pro works just as you would expect it to right out of the box. In OBS (which is by far the most popular application for streaming games), I was able to add the Facecam Pro and use it normally without any problems; everything was normal in Zoom as well. I don’t think you’ll have to worry about software compatibility issues with the Facecam Pro.

At $299, this is definitely one of the most expensive webcams on the market. It’s not the kind of thing you’d buy for simple meetings and casual content creation. The Facecam Pro isn’t a value winner, even among 4K webcams such as the Obsbot Tiny 4K which can be found for as little as $200.

However, the Facecam Pro is also the most capable webcam you can buy. It does 4K60, it has autofocus, it has good first-party software, and it’s compatible with the third-party software you’d want to use with it. It truly is a product for professional content creators, and in that context, it’s actually not all that expensive. Lots of 4K60-capable cameras cost much more (as much as four figures) and aren’t exactly ideal replacements for webcams.

Flexibility is the main selling point of this webcam. Even if you’re limited to streaming or uploading videos at 1080p, 4K can still be beneficial, and not having to compromise on 60 fps is a big deal. At least until 8K webcams pop up, the Facecam Pro can be described as a “no compromises” sort of product. For professional content creators and those that aspire to create content professionally, the Facecam Pro might be a worthwhile investment.

For the casual user, it’s not a particularly great buy. There are other, cheaper webcams with more practical features, and 1080p webcams can also serve just as well.