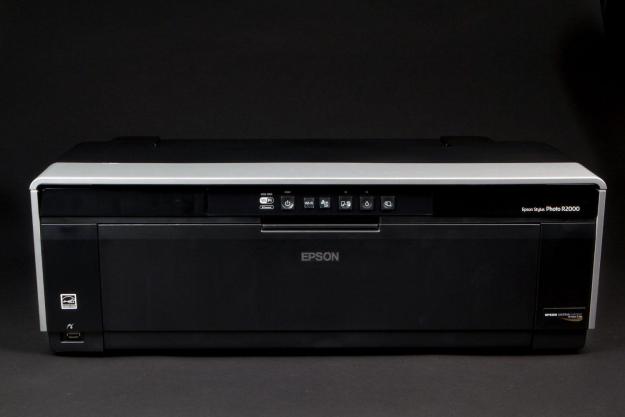 “If you’re finding even the more advanced home photo printers are a bit lacking, the Epson Stylus Photo R2000 is a good step-up into the more advanced capabilities that a prosumer printer offers. Be prepared to tweak image settings, however.”

The prosumer class Epson Stylus Photo R2000 is the entry-level inkjet model in Epson’s wide-format photo printer line. Unlike higher end, more expensive models, the R2000 doesn’t use as many ink cartridges and it doesn’t accommodate paper larger than 13 inches. But if you’re a graphic designer on a budget, a budding photographer who’s shooting with a decent DSLR like a Canon Rebel, or even a home user looking to make prints from a high-end point-and-shoot, you’ll be pleased at just how much better the prints look from the R2000 when compared to a standard photo printer or photo MFP.

With the capability of handling media up to 13 inches wide, the R2000 is considered a wide-format printer, although it’s smaller in size than many of the prosumer-level photo printers we’ve tested lately; it measures 24.5 x 12.8 x 8.6 inches (width x depth x height), without the tray extended or the roll paper holder attached. It weighs in at 27.5 pounds, so you may be able to unpack it yourself, and even fit it on a large desk.

Despite its entry-level status, the R2000 has exceptional media handling capability, including roll paper.

All of Epson’s prosumer photo printers have a very similar appearance, in a plain silver tone. The R2000 lacks the LCD panel found on other Stylus models. Instead there are a series of buttons and indicator lights that run horizontally on the top-right of the front panel. These control power, paper eject, “install and prime new ink cartridge,” and “use roll paper holder,” alongside some indicator lights.

Despite its entry-level status, the R2000 has exceptional media handling capability. There are two paper input trays on the top of the printer. The one closest to the front has a capacity for 120 sheets of plain paper or up to 30 sheets of photo paper. The tray behind that is a single-sheet feeder designed for fine-art media. There’s an additional slot at the rear of the printer for use with roll paper. The roll paper holder is removable, and generally not installed on the printer unless you are using a paper roll.

Finally, there’s a front sheet feeder located on top of the output tray. This is used to feed thick media, including poster board, as well as print on CDs and DVDs with printable surfaces, using the special tray included with the printer. This path is straight through, meaning that the printed media exits at the rear of the printer, so room needs to be left between the rear of the printer and any objects that might be impacted from media traveling this path.

Being that it’s larger than a basic printer, the R2000 comes in a large box, naturally. Included are eight UltraChrome High-Gloss 2 pigment-based ink cartridges. The inks are Photo Black, Matte Black, Cyan, Magenta, Yellow, Red and Orange, as well as a Gloss Optimizer that provides prints with a smoother finish. Gloss optimizers are common in printers of this class, and cost about $22 each. Epson does not quote an expected yield, which is a common practice for photo printers as there’s no way to know how many prints you can expect with the kinds of photos you are likely to print.

While the printer does not come with either a USB or Ethernet cable, it does include the aforementioned roll paper holder and CD print tray, as well as software for preparing professional-looking CDs and DVDs. A disc contains drivers for Windows and Mac OS X.

Epson also provides a bit more documentation than we sometimes see with the other printers we’ve reviewed. There’s the “Start Here” setup sheet, but there’s also a 51-page “Basics” booklet that covers much of what you need to know in order to successfully use the printer to its maximum capability. Additional documentation is available online on Epson’s support website.

Setting up a new printer these days is fairly straightforward. Unbox the thing and set it on a table, load the eight cartridges, and turn it on; you don’t need to power up the printer first to install the ink, like some printers require.

The R2000 takes about 5 minutes to prime itself before first-use, so take this time to load some paper and install the drivers. The installation CD takes you step-by-step through the process, and you can use USB to connect the Stylus Photo R2000 directly to your PC or Mac, or Wi-Fi or wired Ethernet to hook the printer up to a network. We used wired Ethernet, and the installation software found the printer on our network and installed the drivers with no problem.

We were a bit disappointed that we had to tweak the image file to get a great print.

The R2000’s eight-color pigment ink system is designed to provide a wide color gamut – for a printer at this price, it’s exceptionally good at reproducing shades and detail. At the same time, one of our test prints was disappointing. We tested using Epson’s Hot Press Bright and Premium Photo Glossy papers; with both papers, we used the default settings, selecting the specific paper in the driver. Prints were somewhat light in spots, although this was only discernable when looking closely at the reference prints. We printed on both papers twice, to make sure it wasn’t an anomaly – it wasn’t. As with all photo printers of this caliber, we didn’t bother with testing print speeds – expect it to be slow.

Tweaking the brightness level in Picasa 3, however, let us produce prints visually indistinguishable from the reference prints. But, with other printers, we’ve come closer to reference print quality with no tweaking. Without doing extensive testing, it is impossible for us to say why this is happening with this particular image. But regardless of the paper setting in the print driver, it’s always a good idea, especially with prosumer printers such as the R2000, to use vendor-supplied ICC profiles for the specific paper being used.

If you’re finding even the more advanced home photo printers are a bit lacking, the Epson Stylus Photo R2000 is a good step-up into the more advanced capabilities that a prosumer printer offers. The eight colors of inks provide a wider color gamut than the typical four colors of a home printer, and can reproduce more subtle shades resulting in better looking prints. In addition, the roll paper holder at the rear of the printer provides the opportunity to use a wide range of specialty media types, some of which are easier to obtain in roll format. We were a bit disappointed, however, that we had to tweak the image file to get a great print from the printer with default settings. This hasn’t been necessary with other Epson printers we tested, and brought our overall rating down somewhat.