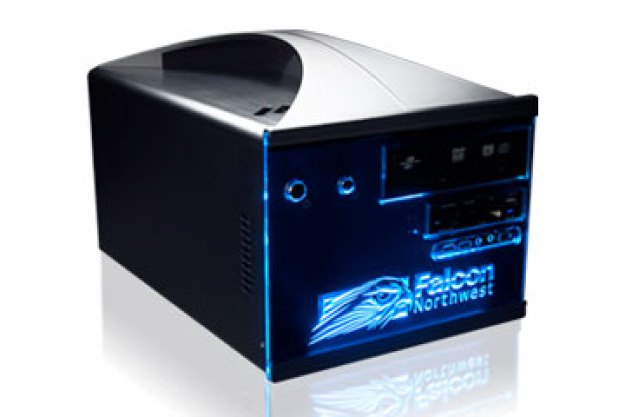 “For hardcore gamers, this is the perfect solution. The convenient handle and relatively light weight make this desktop easy to tote around.”

Founded in 1992, Falcon Northwest is among the oldest companies in the business of producing custom PCs. The Mach V, Falcon’s flagship, has long been one of the best choices for gamers in need of absurd performance. It’s far from the only product offered, however.

Today we’re looking at the FragBox, the smallest desktop sold by the company. Don’t judge this computer by its diminutive stature. Even the base model, which starts a tad over $1,600, comes equipped with a Core i5-2300 processor, 4GB of RAM and a GeForce GTX 550 Ti video card. These parts sit upon an Asus Maximus IV Gene-Z motherboard, one of the best (and most expensive) Micro-ATX motherboards available.

Our nearly $3,000 review unit, however, is equipped with a Core i7-2600K, 8GB of RAM and not one but two GeForce GTX 570 video cards. Other notable improvements over the base model include a Crucial 64GB solid state drive, a 2TB Western Digital Black mechanical hard drive, and a COOLIT ECO II 80 liquid CPU cooler. As configured, our review unit retails for nearly $3,000.

Such powerful hardware will perform well, but considering the price, it should. The greater challenge is compacting all of this in to a small package that is more attractive than a typical mid-tower gaming PC. Can this high-end FragBox justify itself?

Not quite a shoebox – but still impressive

If the FragBox’s name left any doubt as to the intended audience, the aesthetics should clear it up. Left unplugged, the desktop is relatively mundane thanks to a black-on-black paintjob that’s broken only at the front by a Falcon Northwest logo. Once turned on, however, the logo at the front lights up brilliantly, a feature that’s sure to excite enthusiasts. The LEDs are a bit bright, however, and we can see them being an annoyance if the computer isn’t housed underneath a desk. Fortunately, Falcon does include a switch on the back to turn them off if they become irritating.

Visit the FragBox’s web page and you’ll soon lay eyes on its tagline, “all the power of a full sized system – in the size of a shoebox.” The employees of Falcon Northwest must have large feet, as the enclosure measures about fifteen inches deep, ten inches wide and eight inches tall. While there’s likely a similarly sized shoebox in existence, it’s not going to be found outside a big-and-tall store.

Still, this desktop is clearly smaller than average. Most mid-tower cases are equally deep, twice as tall, and equally wide, so the overall volume of this enclosure is about half that of a standard ATX mid-tower.

That makes this rig easy to place on a desktop. It’s also easy to carry around, thanks in no small part to a handle that’s integrated into the top of the case. Geeks of every physique can tote it about, as our fully loaded review unit weighed only 25 pounds.

Small though it may be, our review unit had no shortage of ports available. At the front of the enclosure there are two USB 2.0 ports, a FireWire port and individual headphone and microphone jacks. In addition to this, an optional media reader was included, providing support for virtually every type of memory card known to man and an additional USB 2.0 port. A LG DVD multi-drive rounds out the front of this desktop.

Though we’d like to see two more USB 3.0 ports, this is an impressive array of options for such a small computer.

Bloatware isn’t an issue on this PC. There simply isn’t any. As a result, the computer boots quickly and smoothly.

Like most boutique computer manufacturers, Falcon Northwest puts every computer through stress testing before it goes out the door to ensure stability. The quality assurance checklist is provided in a binder along with several additional cables and adapters and a Windows installation disk. That’s a nice touch, as the mainstream consumer brands stopped shipping Windows disks with their computers years ago.

Given the impressive hardware equipped by the FragBox, you’d expect excellent performance – and that’s exactly what we received in our benchmarks.

The Core i7-2600K processor in this desktop has a base clock speed of 3.4 GHz with a maximum Turbo Boost speed of 3.8 GHz. These already excellent speeds are enhanced by Falcon Northwest’s overclocking service, which in this instance shoots the processor up to a staggering 4.5 GHz.

Although Intel’s six-core Core i7-990X Extreme would be quicker, this is otherwise the cream of Intel’s crop, and it doesn’t disappoint. SiSoft Sandra’s Processor Arithmetic Benchmark reported a combined score of 123.13 GOPS, while 7-Zip’s application benchmark turned in a staggering score of 24,916.

Multimedia performance is also excellent. PCMark 7 returned a score of 5,649. Surprisingly, this score is somewhat higher than what we received from the iBuyPower Erebus, which was tested with a trio of GTX 580s and a Core i7-990X.

Of course, no one is buying this desktop for general use. It’s built for gaming, so it needs to provide enough graphics horsepower to handle any game throw at it. Again, it doesn’t disappoint. 3DMark 11 returned a score of 5,723, and while this is far from the best score we’ve ever recorded, it’s solid for a computer that’s small and relatively affordable.

Are the synthetic benchmark results backed up by real-world gaming performance? Yes, absolutely. At a resolution of 1650 x 1080, using the highest pre-set detail levels available, the FragBox managed to render over 100fps in Far Cry 2 and Dawn of War 2: Retribution. Just Cause 2 returned a result of 44.43fps with all details set to maximum and several demanding options, like screen space ambient occlusion (SSAO), turned on. Metro 2033, one of the most graphically advanced games currently available, scored slightly lower. Yet even it was smooth, running at an average of 38fpswith detail settings at Very High.

This isn’t the quickest gaming computer, but it’s more than capable of handling any game available today. Given the large gap between this computer’s price and that of the type of gaming PC we’re usually sent for review, the performance is nothing short of outstanding, and won’t leave anyone feeling as if they were left behind because they decided not to spend more.

Gaming computers are not known for being quiet, but noise is of particular concern for a small gaming desktop such as the FragBox. Because of its size, all of the components are in a tighter space, leaving less room for air to flow through the computer. There also isn’t room for the gigantic 140mm+ fans found on larger PCs.

Even with a single video card, such a configuration would likely be a bit loud. Slam in two GTX 570s and, well, you’ve just invented a space heater. At full load this tiny desktop is significantly louder than most systems that use an ATX mid- or full-tower cases. The good news? Noisy though it may be, the racket is at least smooth and entirely devoid of rattles. Given time, most users will come to ignore the whoosh of the exhaust.

With the fans working so hard, most gamers would expect temperatures to be low, but the size of this desktop again works against it. Stress testing with Furmark brought GPU temperatures up to 87 degrees Celsius, while using OCCT to stress the processor brought to a scorching peak of 82 degrees Celsius.

Neither figure is alarming, but these high temperatures allow the FragBox to function as a space heater as well as sound like one. While this trait might be appreciated during a winter gaming session, it was less comfortable in the middle of summer. No matter the season, this computer must absolutely be kept in a well-ventilated area to ensure it remains stable.

In many ways, the FragBox is an impressive gaming PC. Half the size of a normal gaming desktop, it still manages to provide outstanding power. Although excellent scores were expected, the defeat of the iBuyPower Erebus in PCMark 7 was surprising, as that system costs nearly three times as much.

Much sound and fury is required to achieve such impressive figures in a small enclosure, however. Falcon Northwest can’t be blamed for this. They’ve done what they can, but when two massive video cards and a heavily overclocked processor are crammed in a small box, excessive heat is the inevitable result.

Because of the noise and heat, it’s difficult to recommend this product to anyone who isn’t a hardcore LAN warrior. For those few gamers, this is the perfect solution. The convenient handle and relatively light weight make this desktop easy to tote around. Everyone else, however, would be better served by the company’s slightly larger Talon, which is a couple hundred dollars less than the FragBox when configured with nearly identical hardware.

Correction: Maingear’s Vybe does in fact include USB 3.0 in the base configuration.