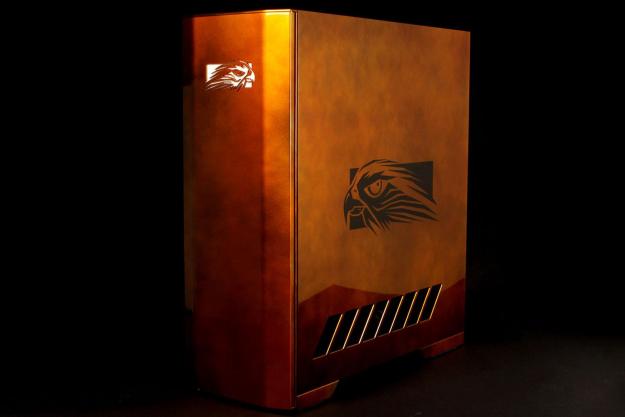 “The Mach V is expensive, but it looks, feels, and performs like no other. Few competitors can match its performance and none can match its elegance.”

Now is a great time to be a computing enthusiast. Sure, the market has shrunk overall, but that’s only made people who love powerful computers more important. The gap between the slowest and quickest consumer systems has grown tremendously over the last decade.

This has helped new enthusiast PC companies like Origin find footing, but the veterans have benefited as well. Falcon Northwest, founded in 1992, is one such company. It’s challenging Origin’s performance dominance with the updated Mach V, a massive high-end desktop that builds on two decades of experience.

On paper the Falcon is almost identical to the Origin Millennium we tested just a couple months ago. Both have an overclocked Core i7-5960X octo-core. Both have three Nvidia GTX 980 graphics cards. They even arrived with identical ASUS X99 motherboards.

Falcon asks over $8,400 for our review unit, though, while Origin charged $6,300 for the Millennium we tested. That’s a big difference. Let’s see if the Mach V justifies the extra Benjamins.

Custom paint, if you pay for it

This Mach V is orange. Very orange. But that doesn’t mean yours will be. The standard coat is matte black; the custom paint is optional. Falcon can handle anything from solid colors to complex designs if you’re willing to pay for it.

Custom colors start at $750 and goes up from there as more complex patterns are requested. The “cloud” paint you see here rings up at just over $1,300. Other companies will do similar for less (Origin offers a few pre-selected patterns for $450), but most don’t offer the same automotive-quality techniques used by Falcon. This provides a beautiful gloss finish and excellent protection against scratches. Real force is required to make a mark.

While orange is eye-catching, we prefer this system in darker colors, as they bring out the subtle backlit Falcon Northwest logo on the front of the case. Aside from the power buttons, this is the only LED-lit element on the case, which makes it more subdued than the competition. The case doesn’t even include a window.

Unlike Origin’s Millennium, which feels a bit fragile, the Mach V is rock solid. Its case includes a beefy top handle, and every panel is metal. The boxy system is still heavy and hard to move, though, so this is not the rig to buy if you frequent LAN parties.

Falcon builds the system with the motherboard port panel oriented towards the top, which means all its connectivity is in one location.

There are still a couple front ports, though. They include two USB 3.0 ports with headphone and microphone jacks. Some competitors, including the Origin Millennium, offer more ports up front.

The motherboard adds a slew of additional options including 10 more USB 3.0 ports, two USB 2.0 ports, two Ethernet jacks, 5.1 audio with S/PDIF out, and a buffet of DisplayPort, DVI, and HDMI outputs. Nvidia’s drivers support only output to four monitors at once, though, no matter the connections you choose.

802.11ac Wi-Fi and Bluetooth 4.0 are included with the Asus X99 motherboard upgrade in our review unit. The base model has a Gigabyte motherboard that lacks wireless features.

Opening the Mach V via its tool-less latches reveals a lovingly crafted interior that’s built to achieve maximum result with minimum hardware. There are just four fans in the entire rig (not counting the video cards), two of which are massive 200mm blowers near the bottom of the enclosure.

Opening and upgrading the Mach V is a breeze, though a couple RAM slots are obstructed.

A custom duct that spans the case from power supply to exhaust keeps air flowing, but it also blocks the memory DIMMs and adds an extra step to adding or replacing RAM. Video cards are secured via an extra screw as well, which makes removal or installation slightly more involved than normal.

Liquid processor cooling is standard on the Mach V. While this keeps the overclocked octo-core in check, it also blocks two DIMM slots entirely, making them impossible to service without removing the radiator.

The six hard drive bays, on the other hand, are wonderfully simple. Each is a plastic cradle that can accommodate either a 2.5- or 3.5-inch drive. Once a drive is secured to the cradle, it simply slides into place. Each bay is free of obstruction so SATA connectors are easy to attach. The four optical drive bays don’t receive this treatment, but they too are easily accessed once both side doors are removed.

Overclocked to the max

While overclocking is technically an option on the Mach V, it’s free to add, so there’s little reason to not tick that box. No additional cooling is required; the stock liquid cooler can handle it. Our review unit in fact arrived with a maximum Turbo-Mode frequency of 4.7 GHz, 200 MHz higher than the Origin Millennium we received.

Storage in our review unit consisted of two Crucial M550 1TB solid state drives in RAID0 alongside a three-terabyte mechanical drive. The SSDs produced a sequential read speed of 1,057 megabytes per second. That’s faster than the Genesis, which had a single Samsung EVO drive and scored 442.2Mbps. Only SSDs in RAID or PCI-Express drives can deliver similar speeds.

Three Nvidia GTX 980 video cards in SLI provide gaming grunt. These powerful and efficient cards are not overclocked, as they were in the Millennium, yet they produced slightly better 3DMark scores.

This is an unusual result that’s probably due to a driver update provided by Nvidia since we reviewed the Origin. It’s likely we’d see the same improvement in that system if we re-tested it.

Move down the graph and you’ll see the AVADirect, which had a single GTX 980, and the Lenovo Erazer, which had a GTX 760. Neither is slow, but they’re clearly out of their league here.

Blizzard’s Diablo 3 is our least demanding game, and that was reflected in our 1080p tests. With low detail settings the game averaged 488 frames per second; at maximum it dropped a tad to 447 FPS.

4K performance was a bit odd, as the game hit 145 FPS at both low and maximum detail. This indicates it was held back by some other bottleneck, such as the CPU. Still, gameplay was extremely smooth; the minimum frame rate never dropped below 125 per second.

This deceptively demanding strategy game ran at an average of 228 FPS with resolution at 1080p, detail at medium, and 2x MSAA turned on. Increasing settings to the maximum preset with 8x MSAA dropped the average to 198 FPS. We used the built-in benchmark.

Changing resolution to 4K introduced the same bottleneck we saw in Diablo 3. The average was 86 FPS at medium/2x MSAA and 84 at maximum/8x MSAA. The minimum dropped as low as 24 FPS, however, so motion appeared choppy at times.

DICE’s epic shooter can be a graphical hog, but at 1080p it proved no challenge for the Mach V. The framerate bounced off the game engine’s 200 FPS cap at both medium and ultra detail. At ultra, however, the framerate occasionally dipped as low as 138 FPS.

Switching to 4K increased load substantially, yet gameplay was still smooth. At medium the average was 128 FPS and at ultra it was 72 FPS. The minimum framerate at ultra dropped as low as 48 FPS, but only rarely.

This new open-world, cross-platform game proved a bit more challenging than Battlefield 4. At 1080p and medium detail, with depth of field and tessellation on, it averaged 124 FPS. Increasing to the ultra setting decreased the average to 113 FPS. The minimum framerate dipped as low as 57 FPS. We used the in-game benchmark and installed the special ultra texture pack for use with the ultra detail setting.

4K really put the Mach V to the test. At medium, the average was 88 FPS and at ultra the average was 65 FPS. Minimum framerates dropped as low as 30 FPS for several seconds at a time, adding noticeable chop to gameplay. With that said, engaging V-Sync helped tremendously and made the game smooth enough to enjoy.

Crytek’s graphical tour-de-force is the most demanding game we test – at its highest settings, at least. The medium preset with 2x MSAA and 1080p resolution averaged an excellent 171 FPS. The very high preset with 8x MSAA averaged a still-smooth 82 FPS.

Even this powerhouse can’t handle Crysis 3 at 4K, but it comes close.

4K and medium with 2x MSAA hit an average of 108 MPS, but we saw serious framerate dips as low as 18 FPS. Maxing the game out with the very high preset and 8x MSAA dropped the average dramatically to 29 FPS.

That’s not exactly smooth, and occasional dips into the mid-teens mean it can’t be called playable. However, this is the closest any desktop we’ve reviewed has come to handling Crysis 3 at 4K and maximum detail. A single GTX 980 averages just 12 FPS at the same settings.

Computers that break performance records are often loud, but not the Mach V. We heard just 36.6 decibels of fan noise at idle and up to 44.5dB at load. That’s noticeable in a quiet room, but it’s over five decibels less than the Origin Millennium’s load result. It’s also only two decibels more than the AVADirect Z97 Quiet Gaming, a much less powerful computer designed specifically with noise in mind.

Power draw remained high, though, with our wattmeter recording 132 watts at idle and up to 770 watts at full load. Compared to the Millennium the Mach V draws over 100 watts less at idle, but almost 100 watts more at load. The load figure is also twice that of the AVADirect Z97 Quiet Gaming.

All Mach V systems come with a 3-year warranty at no extra charge, an offer that few competitors are willing to match. It even includes one year of “Falcon Overnight” service; if there’s a problem the company will authorize one-day shipping at no extra charge. Lifetime phone support is also part of the bargain, but that’s matched by all Falcon’s competitors.

The exact Mach V we reviewed will set you back a shocking $8,484. Subtract the costly paint job, however, and you’re looking at about $7,300. That’s still a wheelbarrow of cash and more than the $6,300 Origin Millennium we recently reviewed, but the Mach V is slightly more powerful. When the two are similarly configured the Origin is close to $7,450.

Falcon’s Mach V is also a bit quicker, a bit more attractive and generates significantly less noise. That’s not to say Origin loses across the board, however. Its Millennium has a more configurable case with a custom lighting system and case window that Falcon does not offer.

Your preference between the two will depend on the kind of gaming rig you enjoy. We’re partial to subtlety, so we prefer the Mach V. It’s a system quiet enough to use every day in a peaceful office yet powerful to break performance records and play games at 4K.

Topics
AMD may have just leaked the Ryzen 9 7950X3D release date
Lenovo’s CES 2023 Legion laptops include AI ‘graphical wizardry’
AMD CES 2023: Ryzen 9 7950X3D, mobile Ryzen 7000, and more
CES 2023: AMD’s next-gen laptop GPU could beat a desktop RTX 3060
GPU prices and availability (February 2023): how much are GPUs today?
The best PC power supply for 2023
ChatGPT has a new way to detect its own plagiarism
Samsung Galaxy Book 3 Ultra vs. MacBook Pro 16-inch
The Galaxy Book 3 Ultra is Samsung’s most powerful laptop ever
Nvidia may have another monster GPU in the works, and the price could be outrageous
AMD’s Ryzen 9 7950X3D pricing keeps the pressure on Intel
What is ChatGPT Plus? Everything we know about the premium tier
ChatGPT Plus to bring priority access during peak times — at a hefty price