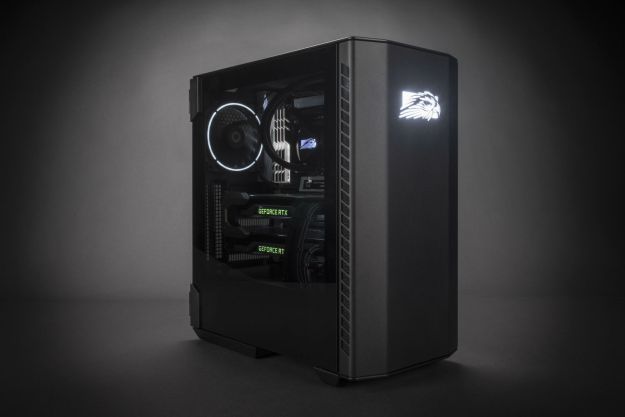 Long before mainstream brands like Alienware, Omen, Legion, and Razer existed, there was Falcon Northwest. Founded in the early 1990s, this boutique firm has not only earned a distinction for being the first manufacturer of gaming PCs, but it’s nurtured a cult-like following for its impressive attention to detail.

Falcon has spent the greater part of the past two years refining the mid-size desktop’s chassis and modernizing its design to make this. The 20th Anniversary Edition of the Talon. From its insanely powerful chip selection to the design of the fans and vents, Falcon’s curation of meaningful technologies for the build-to-order Talon proves that the company is still in tune with the needs of gamers today.

The best anti-Mac Pro this side of Windows

Given its storied gaming heritage, you’d expect likely Talon competitors to be products from other boutique brands, like Corsair-owned Origin PC or Digital Storm, but this desktop has an even more upscale rival in its sight: Apple’s Mac Pro. The unstoppable performance of the Talon makes it a great workstation for professionals working on large files and rich amounts of data, and this desktop’s build quality makes comparisons with Apple only natural.

Unlike Alienware’s molded plastic designs, the Talon is milled from solid blocks of aluminum, giving it durability unlike anything that has come across our desks in the PC space. The use of plastics is kept to a minimum, and unlike other metal-clad gaming desktops that rely on thinner sheets of metal, the 4mm thick slabs of aluminum help to protect the expensive silicon components inside.

You really have to feel the metal doors to appreciate the Talon’s tank-like build quality. The generous use of metal contributes to the Talon’s 40-pound heft, making it more than twice as heavy as the similarly-sized Origin PC Neuron, with Apple’s aluminum-milled Mac Pro weighing a comparable 39.2 pounds.

For its 20th anniversary redesign, you can choose either a more understated aesthetics with solid metal doors for a workstation-like aesthetics, or you can opt for see-through tempered glass side panels that will showcase Falcon’s new tasteful LED lighting system. Though LED embellishments make the Talon look more like a modern gaming system, Falcon’s implementation of this feature is rather subtle.

With a dual-GPU setup behind its suicide-style doors, the Talon has Ferrari power behind its Hummer-like aesthetics.

Even with the glass panel options, the Talon’s design wouldn’t feel out of place in an upscale office. Make no mistake though, with a dual-GPU setup behind its suicide-style doors, the Talon has Ferrari power behind its Hummer-like aesthetics.

Cloaked in a matte bead-blasted finish, the thick metal panels give our review unit the illusion of a larger presence on our desk than what you’d expect of its 8.75 x 15.5 x 17.25-inch dimensions. Even though you won’t find a cheese-grater here, an angled front facade with chunky side vent cutouts gives the Talon its art deco-like stature, not unlike that of the Empire State Building.

Though there aren’t expensive caster wheels to roll the Talon around – like the Mac Pro – the thick metal stand on the bottom not only adds to the Talon’s elevated aesthetics but helps with airflow. A variety of vents, filters, and fans inside keep the system cool, and to Falcon’s credit for choosing the ideal cooling components, the system ran quietly for the most part.

Surprisingly, fan noise was loudest when the system initially powered on. The Talon quieted down to a quiet hum immediately after that and operated at that level even under heavy workloads.

The thoughtful attention to details make the Falcon stand out.

Rear-hinged doors that stay shut with just the right amount of magnetic force make the internals more easily accessible than the competing Origin PC, which shares a similar design but is hampered by an overly strong magnetic closure. It’s this thoughtful attention to details that make the Falcon stand out. The omission of Thunderbolt 3 ports is a letdown, but you’ll find USB-C and an assortment of USB-A and other ports located around back and also on the top of the case for easy access.

Falcon Northwest’s attention to detail extends far beyond the thick glass and aluminum side panels. Unlike other PC vendors, the Talon 20th Anniversary Edition was immaculately packaged, with doors, hinges, and movable parts taped to prevent scuffs and scratches while the unit is in transit.

Aside from being able to choose from Falcon’s carefully curated assortment of internal PC components for your build, there are a variety of customization options that make the Talon feel like a bespoke PC. Case colors, custom logo jobs, and UV printing help to give the Talon a very personalized feel. Our review unit comes with a metal plaque under the right side door with Digital Trends’ name and serial number engraved.

Down to the core

With a starting price of $2,432, the Talon isn’t the most affordable gaming PC on the market — even at the base configuration. The premium you’re paying on the Talon comes down to the high-end materials, rigorous testing, and craftsmanship.

The price of our $6,488 review unit may raise a few eyebrows.

And if you’re looking at Falcon Northwest, chances are high that you won’t be buying the base configuration. In fact, it’s tempting to load the system up with all the latest options when going through the configuration tool on Falcon’s website, and upgrades quickly add to the cost of the system.

Our $6,488 review unit may raise a few eyebrows, but Falcon’s pricing is competitive with other boutique PC manufacturers.

The twelve CPU cores coupled with the 4,352 CUDA cores on each of Nvidia’s flagship RTX graphics card pack unstoppable gaming and workstation level performance. The Talon is by far one of the fastest systems we’ve tested, beating out even larger rivals, like Digital Storm’s Aventum X, especially with multi-threaded workloads.

Given that the Ryzen 9 3900X processor supports 12 cores and 24 threads, it readily beats out the competing Intel Core i9-9900K found on competing premium gaming desktop configurations, with the Talon scoring 48,814 points on Geekbench 4’s multi-threaded benchmark compared to approximately 30,000 points. On Geekbench 5, the Talon scored 13,129 points on a similar benchmark, placing it more than 4,300 points ahead of systems configured with the Core i9-9900K.

The Ryzen processor on our Talon configuration also edged out a competing system equipped with Intel’s Core i9-9900K processor when tested in Cinebench R20. The larger number of cores on AMD’s design means that our Talon’s 7,100 point-performance placed it more than 2,500 points ahead of the i9-9900K. Video editors and content creators will have a heyday with this kind of multi-core power.

Given the strong results posted by the AMD silicon, the Talon scored within the top one percentile of gaming desktops in 3DMark and PCMark tests. The Talon is able to juggle video exporting while working on large Photoshop files and opening up massive Microsoft Office Excel files with ease – this is a system that refuses to slow down, regardless of what you throw at it.

The 7nm CPU’s support for PCIe 4.0 also helps to make files, games, and applications launch extremely fast. When benchmarked using Crystal DiskMark 6’s tool, our Samsung 970 EVO drive averaged 2,151 MB per second on the read test and just under 1,900 MB per second on the write test, which are among the fastest speeds we’ve encountered.

Thanks to its dual-GPU setup, gaming performance was no slouch. The Talon consistently performed at well over 155 FPS on Fortnite, even in 4K with Epic mode turned on, which is the highest score we’ve seen by a big margin. Performance was similarly stellar in Civilization VI.

The Talon was also a strong performer in more demanding titles like Assassin’s Creed Odyssey and Battlefield V. Where other high-end gaming rigs we’ve reviewed began to stutter in higher game settings in 1440p resolution, the Talon maintained consistent performance until 4K with medium settings on both games. In Assassin’s Creed Odyssey, the game performed without any lags or ghosting through all modes in 1440p, and choppy frames were only noticeable in High mode with 4K resolution. Few systems are as 4K-ready as the Talon.

In addition to a 30-day money-back guarantee, Falcon Northwest offers a very generous three-year limited warranty that covers parts and labor. During the first of the three years, Falcon will also cover overnight shipping costs should any problems arise, ensuring as little down time as possible. After the first year, you’ll have to pay to ship the unit to the company’s repair center, but Falcon will cover return shipping to you. The three-year coverage is lengthier than what’s covered by most gaming companies and is more typical of enterprise systems.

Business users looking to adopt the Talon for data analysis and workstation use may be disappointed that Falcon doesn’t offer any warranty upgrade options. Mainstream PC manufacturers, like HP, Dell, and Lenovo, all offer optional extended warranty upgrades that help to prolong the expected life of a system.

In reimagining one of the most successful gaming desktops twenty years later, Falcon Northwest has created a unique bespoke gaming PC with unrivaled performance and build quality in the Talon 20th Anniversary Edition. Milled from solid metal, the Talon is arguably the best vision of what a Mac Pro could be if Apple’s desktop didn’t run MacOS.

But beauty isn’t just skin-deep, and the Talon comes equipped with the best processors and up to a dual graphics card setup inside its tank-like craftsmanship — these PC components bring agile performance to this hefty desktop. The Talon is really a Ferrari disguised as a tank, and gamers with the cash to splurge and an eye on design will surely not be disappointed with this desktop, even if it means sacrificing some of the work in building your own rig in favor of one of Falcon’s build-to-order configurations.

Dell’s Alienware Aurora R8 and Aurora R9 desktops can also be configured with a dual-GPU design. Though Alienware’s Aurora R9 starts at a more modest $799, upgrades can also be expensive. A more comparable configuration with an Intel Core i9-9900K processor and dual RTX 2080 Super graphics take the price up to $4,675. When compared against the $6,488 Talon, the nearly $2,000 premium on Falcon’s design can be attributed to the Talon’s reliance on more metal parts instead of Dell’s embrace of molded plastics.

One of our top picks for gaming PCs this year is Origin PC’s Neuron, a boutique gaming desktop that offers similar configurations as the Talon with a similar rear-hinged glass door design. Like the Talon, the Neuron delivers plenty of performance — as expected giving Origin PC’s high-end configuration tops out at $13,000 — but if you care about the finer details, Falcon Northwest delivers unsurpassed attention to detail in its construction. Configured similarly to our upgraded Talon review unit, the Neuron would cost $4,000, or $2,500 less, but the lower price is due to Origin’s use of a more compact micro ATX board, which could limit upgrade potentials for serious modders.

With its performance, the Talon is built to give you years of gaming joy. Even as the technology inside fades, the rear-hinged doors provide plenty of access to perform your own upgrades. And if you choose the Talon model with solid 4mm-thick aluminum doors, this rig’s case will likely outlast you.

Yes. Although it’s not the most affordable PC on the market, the Talon’s solid performance and design details make this a versatile PC that will delight gamers and creatives alike.