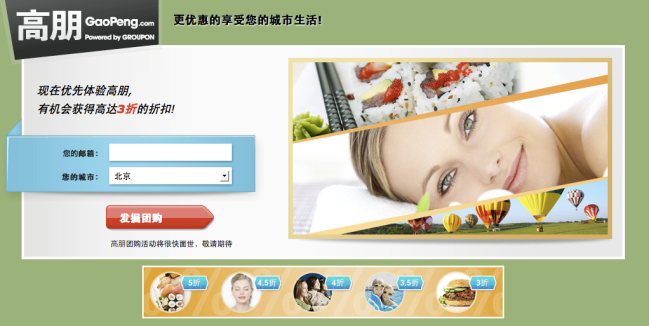 Groupon has announced that it has brought its group-buying service to China through a new website that launched today. Gaopeng.com will initially offer services in Beijing and Shanghai, with other Chinese cities to follow. Chicago-based Groupon partnered with China’s biggest Internet company Tencent and private equity fund Yungfeng to launch the site, according to Bloomberg.

Foreign businesses have historically struggled without (and sometimes even with) a Chinese partner, so Groupon has the benefit of being backed by two of the country’s biggest and brightest (Yungfeng was started by the country’s Internet search giant Alibaba).

The news comes just a week after rumors began circulating that Groupon was intent on developing a presence in China, although the company remained tight-lipped about its plans until this weekend.

Groupon may have helped to popularize deal-of-the-day websites in the West, but the company will be facing some stiff competition as it prepares to enter the Chinese market. Group-buying sites like Lashou.com and Meituan.com having been springing up left and right in China as the country’s Internet retail business continues to grow at a brisk rate.

Earlier in February, Groupon came close to becoming a persona non grata in China after it ran a controversial Super Bowl commercial making light of the country’s treatment of Tibet.

If Groupon can win over China’s burgeoning online shopping population and successfully navigate the difficulties of translating its American business model, it may well find its efforts to be well worth whatever expenses it might incur in the process. Gaopeng.com plans to offer its first deal on Monday.

Topics
Save $30 on Microsoft Office Home & Business for Mac or PC
Hackers stole $1.5 million using credit card data bought on the dark web
The best places to buy a laptop online in 2023
Best VPN deals and sales for January 2023
What is ChatGPT Plus? Everything we know about the premium tier
ChatGPT Plus to bring priority access during peak times — at a hefty price
Usually $3,879, this Lenovo laptop is down to $1,479 today
Get this Asus gaming laptop with an RTX 3060 while it’s $400 off
All of Samsung’s videos from today’s Galaxy Unpacked event
Best 2-in-1 laptop deals: Save on Dell, Lenovo, HP and more
The best USB-C cables for 2023
Apple just found a bizarre way to make virtual keyboards less annoying
Forget the MacBook Pro 16: Dell XPS 15 is $400 off right now