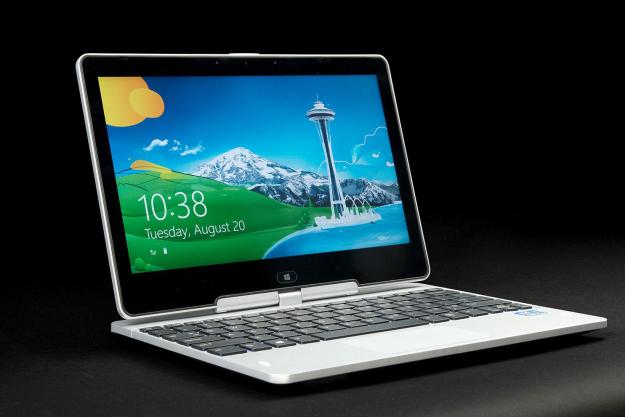 “Mediocre battery life and a dim display hold the Revolve back, but it’s still a reasonable alternative to the Helix for businesses small and large.”

Today, touchscreen PCs are often thought of as a consumer device rather than a business tool, but that perception was once the reverse. Before the smartphone, the iPad, and Windows 8, convertibles like Lenovo’s ThinkPad X-Series and the HP EliteBook 2740p were the only game in town. If you wanted touch, you had to buy a PC built for business.

That changed the moment Windows 8 was released, but neither Lenovo nor HP are backing down from the business convertibles market. Instead, each company has moved forward, revising old models while debuting new ones. HP’s latest is the EliteBook Revolve 810, an old-school convertible with a rotating hinge.

Pricing for the Revolve starts at an intimidating $1,250. Our review unit, which boasts an upgraded Core i5-3437U processor, sells for $1,450. That’s a lot of money, particularly for a convertible PC with an 11.6-inch display, but such exorbitant pricing is not uncommon for an enterprise notebook. Indeed, HP’s alternative looks affordable next to its most direct competitor, the ThinkPad Helix, which starts at $1,400. Is the Revolve the perfect choice for small business?

It’s not metal, but that’s okay

This EliteBook is the first we’ve reviewed in years that doesn’t boast extensive use of brushed aluminum to prove its durability and luxury. HP uses a grippy, rubber-like silver finish, and, though it doesn’t look as nice as aluminum, it feels good in-hand and helps prevent accidental drops. Underneath the surface is a strong magnesium chassis, and the screen is finished with Gorilla Glass II, so this notebook should survive rough handling with grace.

Unlike the Helix, which offers a detachable display, the Revolve uses a rotating hinge. Converting it to a tablet is a matter of rotating the display and then folding it over the keyboard. The hinge itself is sturdy and does a good job of keeping the screen in place while the touchscreen is used, and because the keyboard never detaches, users don’t have to worry about losing it.

However, these benefits are paid for in size. The system is about 7/8th of an inch thick, which is above average for a modern convertible.

Connectivity includes two USB ports (both 3.0), DisplayPort, Ethernet, a combo headphone/microphone jack, and a MicroSD card reader. While this selection of ports isn’t going to impress anyone, it does edge out Lenovo’s Helix, which uses Mini-DisplayPort and only upgrades one of its two USB ports to 3.0. An optional docking station adds four more USB 3.0 ports as well as VGA-out, but is priced at $150.

Great keys with a stunted touchpad

Typing on a laptop built for business is usually a pleasure, and the Revolve is no exception. Though some keys are slightly smaller than normal, the layout does pack maximum keyboard into the space, leaving just a quarter-inch of room on each side. Key travel is good, backlighting is standard (with adjustable brightness), and important keys are exactly where they should be.

We can’t give the same praise to the touchpad, as it got the brunt of this notebook’s small size. Though it’s as wide as a normal touchpad would be, the surface is about half as tall, which makes for a cramped experience. There’s also little room for resting palms. Still, multitouch gestures work well, so it’s not all bad news.

Plus, you may not always need the touchpad. Thanks to the Revolve’s small size and the lack of any volume or power buttons between the keyboard and display, the touchscreen is within three inches of where the user would normally rest their hands. Located on the right flank, HP wisely uses stiff switches instead of buttons, warding off unintentional activation of power or volume.

A decent but dim display

We didn’t use the Revolve long before we noticed that its display is rather dim. We confirmed this during our test, where we found it maxed out at about 134 lux, which is extremely low for any category of PC. The lack of output causes problems when trying to use the system in a bright room, as the Gorilla Glass screen is prone to glare.

We didn’t use the Revolve long before we noticed that its display is rather dim.

The display is average in most other respects, scoring a contrast ratio of 590: 1 at maximum brightness and rendering 70 percent of the sRGB color gamut. Resolution is only 1,366 x 768, but because the screen is very small, content looks clear and sharp. Black levels are good, too, but we can’t help but think a bright, matte display would be better suited to this convertible’s role.

Audio quality provides no surprises as, like most business PCs, the Revolve’s speakers provide clear mid-range tones at moderate volume but do a poor job of handling bass or delivering music to a large room. Anyone who cares about their listening experience should invest in headphones or external speakers.

Although a relatively new product, the Revolve 810 is available only with 3rd-gen Intel Core processors. As we’ve recently discussed, the new 4th-gen parts can do great things for battery life, which means this convertible seems dated from the start.

We found the battery capable of almost six hours when running our light-load reader’s test, a figure that dwindles to 3 hours and 47 minutes during the Peacekeeper Web browsing benchmark. The heavy-load Battery Eater further reduces that number to just over 2.5 hours. These results are not bad for a convertible with a 3rd-gen processor, but they’re put to shame by updated 4th-gen laptops, many of which can last over ten hours in our light-load test and over five in Peacekeeper.

There is a consolation prize: a removable battery. We can’t remember the last time we reviewed a small system with this feature. HP doesn’t sell an optional extended-life battery, however, so the only benefit is ease of replacement if the original goes dead.

Our wattmeter showed the Revolve consuming up to 11 watts at idle and up to 33 watts at load, figures that are a bit high for an 11.6-inch laptop, particularly one with a dim display. Still, like most small laptops, this system will hardly change your power bill.

While the last-gen processor held back the Revolve in our battery tests, we can’t say the same about performance. The Core i5-3437U processor charged into SiSoft Sandra’s Processor Arithmetic benchmark to score almost 43 GOPS, and also returned an excellent 7-Zip result of 7,879 MIPS. These numbers are solid for a dual-core laptop.

PCMark 7 also turned in a good result of 4,506 thanks to this convertible’s combination of a fast CPU and speedy solid-state drive. While we’ve tested a handful of laptops that scored over 5,000, most score no better than the Revolve. We’re impressed to see this figure from an 11.6-inch convertible.

3D performance is the only gap in this system’s armor. The Intel HD 4000 graphics component served up lackluster scores of 3,207 in 3DMark’s Cloud Gate and 397 in Fire Strike. These numbers are below average, even for a 3rd-gen processor, and represent a PC that will have difficulty with many modern games.

Calm at idle, screaming at load

At full or near idle the Revolve is a pleasant system. The fan is almost silent, and as such didn’t register above ambient on our decibel meter. Temperatures are in check, too, with a maximum reading of 83.1 degrees Fahrenheit.

Load, however, changes everything. Our 7-Zip benchmark pumped up the volume to a very noticeable 44.5dB, and our graphics stress test sent readings to redline at 50.1dB, making this the fourth loudest laptop we’ve ever tested.

Temperatures were much higher at load, too, reaching up to 102.5 degrees Fahrenheit. This is an average result for a small laptop, but still high enough to make lap use uncomfortable.

The Revolve proves there’s still life left for durable business convertibles. While its prime competitor is Lenovo’s ThinkPad Helix, the two devices are actually very different. The Helix is thinner, offers a fully removable display for more convenient tablet use, and lasts longer on a charge. But the HP is more affordable, has a backlit keyboard, and offers better connectivity. For a business, choosing between the two will be a matter of preference.

Compared to the convertible market as a whole, however, the Revolve, (like the Helix) doesn’t stand up as well. The starting price of $1,250 puts this system up against the best, yet issues like the dim display and so-so battery life take away from the Revolve’s value.

While businesses may find this durable convertible is a perfect choice, consumers should look for a more well-rounded and affordable alternative, such as Lenovo’s Yoga or Samsung’s Ativ Book Smart PC Pro.

Intel Innovation 2022: 13th-gen chips, slidable displays, and everything else
Best Chromebook deals for September 2022
Samsung’s slidable PC display makes foldables seem archaic
Intel Unison is yet another attempt to make PCs and phones work together
Lenovo is practically giving away this 2-in-1 laptop today
Lenovo Legion i7 gaming PCs and laptops both got massive discounts
Lenovo’s ThinkVision ultrawide curved monitor is 40% off today
When is the best time to post on Facebook?
The classic Macintosh was just redesigned by AI — and it’s beautiful
How to use clipboard history in Windows
Best gaming monitor deals for October 2022
How to add external games to your Steam library
Nreal’s Air AR glasses head to the U.S., ready to rock with iPhones