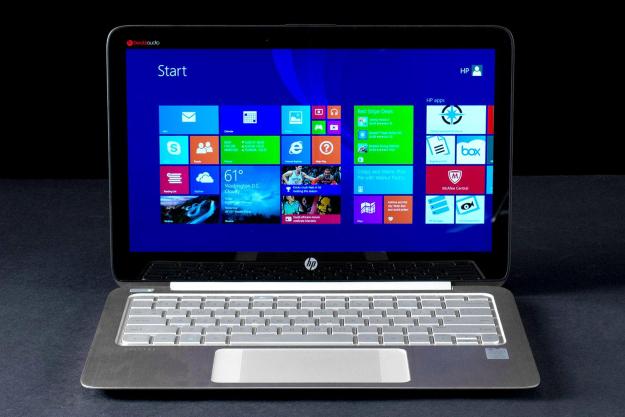 HP’s decision to take the Envy name down-market left the company with an ironic problem; it no longer had a true, dedicated premium brand. To solve this, HP has turned to a specific model of Envy and stolen its name for use with its most expensive laptop. That model is the Spectre, a laptop that wowed everyone at CES 2012 with its glass display lid and strikingly thin design.

HP’s Spectre 13t isn’t an Envy, but it gives other Ultrabooks reason to be jealous.

The original Envy Spectre is no longer available, and its replacement, the Spectre 13t, drops the Envy name entirely. Its base MSRP of $999 makes this Ultrabook the most expensive consumer laptop HP currently sells, which is surprising; most PC makers have at least one model that’s starts between $1,200 and $1,500.

What you receive for your money is no different from more expensive competitors. The processor is the same Core i5-4200U found in most other mid-range Ultrabooks, the hard drive is a 128GB solid state model, and four gigabytes of RAM come standard. Even a 1080p touchscreen is included at no extra charge.

When you add all of this up, HP’s Spectre 13t looks like it could be one of the strongest Ultrabooks on the market, providing quality and speed similar to a Dell XPS 13 at a much lower price. But do the good times last, or does the Spectre try too hard to hide its problems?

Nothing new to look at

Though the Spectre 13t’s name isn’t preceded by Envy or Pavilion, the difference in branding doesn’t translate to a notable difference in design. This is an HP laptop from top to bottom, and that means metal construction with a brushed-aluminum look and a dark metallic display lid provide some extra class and maybe a little menace. Overall, the look is attractive, but not as striking as the glass used in the original Spectre.

The interior is laid out about as you’d expect, with a large rear display hinge holding a thin-bezel display to a tapered metal chassis. Plenty of space can be found along the palm rest and material quality both looks and feels good, though the interior does flex a bit if handled roughly. Gloss has been banished from every surface besides the display itself, which means the Spectre should be easy to keep clean.

Like so many Ultrabooks, this HP is thinner at the front then the rear, which limits space along its flanks for connectivity. This means only two USB ports are available, both 3.0, along with HDMI, DisplayPort, audio and a card reader. Ethernet is nowhere to be found and HP, unlike Asus, does not include an adapter with the laptop.

My, that’s a big touchpad

The Spectre’s keyboard is typical for an Ultrabook. The layout is large enough, the key caps are island-style, and key feel is merely adequate. A lack of travel and mushy feedback places this keyboard below the best, like those found on the Lenovo T440s and Apple MacBook Pro 13 with Retina, but the Spectre is certainly usable.

Backlighting is standard. There are no brightness settings besides on and off, but the “on” setting is the perfect tone for use in a dim or completely dark room, and light-leak is minimal. We were annoyed by the keyboard backlight and Wi-Fi hotkeys, however, because they’re permanently lit even when the backlight is off. While this is obviously meant to make them easy to find, it also can be a distraction when watching media in a darkened room.

The touchpad is as strange as the keyboard is conventional. Though only two and three-quarters of an inch deep, it’s about five and half inches wide, and its surface texture is not consistent. Instead, an inch on the left and right side of the touchpad has a rough feel which instantly distinguishes it from the smooth mid-section.

Why the unusual design? It has to do with Windows 8, which includes new multi-touch gestures that are meant to be controlled by swiping along the side of a touchpad’s surface. On most laptops, this is annoying because there’s no tactile difference to alert you when your finger enters the zone which will activate the new gestures, but Spectre solves that problem with its textured sides. This is a creative solution to a real problem, and it makes Windows a bit easier to use on the Spectre than on other laptops we’ve reviewed.

While 1080p touchscreens are not unusual in Ultrabooks, grabbing one along with an SSD at a starting price of $999 is not terribly common. Fortunately, this doesn’t mean HP has been cheap, as the Spectre’s display performs as well as the best competitors. We recorded a contrast ratio of 650:1 at maximum brightness and the panel rendered 97 percent of the sRGB gamut, numbers that are virtually identical to the ThinkPad T440s, Samsung ATIV Book 8 and Dell XPS 13.

Our subjective impressions live up to the test results, and even exceed them, putting the Spectre on par with the Dell XPS 13 and MacBook Pro 13 with Retina. Most of the credit goes to the laptop’s deep blacks, which are among the best we’ve ever seen on a laptop. This creates a realistic perception of depth that brings the best out of HD video and games.

The speakers complement the display well, providing strong sound even with the volume turned up to eleven. Bass does suffer from a hollow, echoing quality that’s less than ideal, but a lack of serious distortion and a reasonably clear mid-range is enough to make the Spectre a standout in the Ultrabook category. Headphones are in-arguably an improvement, but the speakers will be good enough for many.

The Core i5-4200U that comes standard with the Spectre 13t is a processor we’ve tested many times before and, in theory, should perform the same in every system. Reality, however, proves that theory wrong. We received a SiSoft Sandra Processor Benchmark score of 25.29 GOPS and a 7-Zip compression/decompression score of 4,604 MIPs. Both numbers are well behind the similarly equipped ThinkPad T440s, which managed respective scores of 38.69 GOPS and 7,277 MIPs.

We were skeptical of these results, so we fuddled with both power management and CoolSense, a fan-control technology HP uses to keep the system cooler when it’s not being used on a desk or table. Neither changed the result. The problem, then, may be the design; Intel Core mobile processors automatically alter clock speed based on thermal headroom.

While compute performance proved unimpressive, the solid state drive was a different story, racking up a PCMark 8 score of 4,903. This makes it among the quickest we’ve tested, almost tying the Dell XPS 12 (which scored 4,904) and coming close to the Origin EON 13s and Lenovo ThinkPad T440s, which scored 4,923 and 4,945 respectively.

Intel HD 4600 integrated graphics is the GPU option with the HP, and it led the Spectre to a 3DMark Cloud Gate score of 3,564 and a Fire Strike result of 549. This basically ties the ThinkPad T440s, which scored 3,861 in Cloud Gate and only 463 in Fire Strike, but is below the best competitors. Dell’s XPS 12, for example, managed 4,281 in Cloud Gate and 611 in Fire Strike, and the Asus Vivobook V551L reached respective scores of 5,174 and 912. Gamers will want to look elsewhere if they need to play on the go.

The Spectre’s weight of 3.2 pounds is light for a 13-inch Ultrabook, and its 15mm profile is among the thinnest available. These factors combine to make a very portable package that be toted in a backpack or carried with equal ease. Even the power adapter is small, a trait travelers will surely appreciate.

Battery life is solid. The Peacekeeper web browsing benchmark needed six hour and six minutes to drain a full charge and endurance was extended to nine hours and thirty-eight minutes in our light-load Reader’s Test. The ThinkPad T440s, Dell XPS 12 and Apple MacBook Pro 13 with Retina last thirty to forty minutes longer in our web browsing test, but other options like the Lenovo Yoga 2 Pro and ASUS UX301L last at least an hour less.

Those who care about power consumption will be happy to know this Ultrabook sips rather than chugs wattage. We recorded idle draw of only 7 watts with the display at 100 percent, a figure that jumped to 28 watts at load. Both numbers are slightly below average for the category.

A bit hot under the collar

Though quiet, the Spectre 13t’s cooling isn’t consistent. At idle, the system fan usually spins at a very low speed, making it almost silent, but at seemingly random times it surges to a slightly quicker setting, which brings noise to a noticeable 41.2 decibels. Heavy stress testing increases noise to 45 decibels, and while that’s not excessive, it is louder than the Lenovo ThinkPad T440s, Asus Zenbook UX301LA or MacBook Pro 13 with Retina.

The aggressive fan has its work cut out for itself when at full load. We measured a maximum external temperature of 102.6 degrees Fahrenheit during our benchmark loop, which is hotter than most competitors by a margin of 5 to 10 degrees. At idle, however, the Ultrabook keeps its cool at 82.8 degrees.

A mixed bag of software

Our review unit arrived with an assortment of software which included the full version of Adobe Lightroom 5, a trial of Microsoft Office, an HP “Utility Center,” which provides access to recovery and support tools, and a few other assorted apps. Though this may sound like a lot, it’s actually less than many other laptops, as the Spectre lacks apps for Amazon, eBay, Hulu and other services often found pre-installed. None of the bundled apps put an icon on a desktop; they only appear in the Windows Start Screen.

McAfee Internet Security is the only trouble, but in our experience, McAfee’s trial is far less aggressive with its pop-ups than Norton. The security suite bothered us with just two notifications during the course of our testing.

Performance is the Spectre 13t’s only problem. Though its specifications look fine on paper, they translated to below-average figures in both our compute and 3D benchmarks. Day-to-day use isn’t a problem, but you’ll notice the lack of grunt when editing video or playing games.

By every other metric, however, this Ultrabook excels. The display is wonderful, the speakers are loud, the chassis is sold and reasonably attractive, the touchpad works well, and the battery provides plenty of juice.

And then there’s the price. The Spectre has an MSRP of $999, and if you shop around a bit you’ll often find it sold for a fair bit less than that. A Dell XPS 13 or Apple MacBook Pro with Retina are better overall, but are they so superior that they justify selling for hundreds more? The answer to that question is ultimately between you and your wallet, but the Spectre certainly makes an argument for itself.

This is the best laptop that HP has made since the 2011 version of the Envy 14, and is a strong contender against the best in the segment. If you’re looking at Apple, Dell or a high-end Asus Zenbook, but you can’t stomach their high prices, give this HP a chance. No other ultrabook provides a better value.