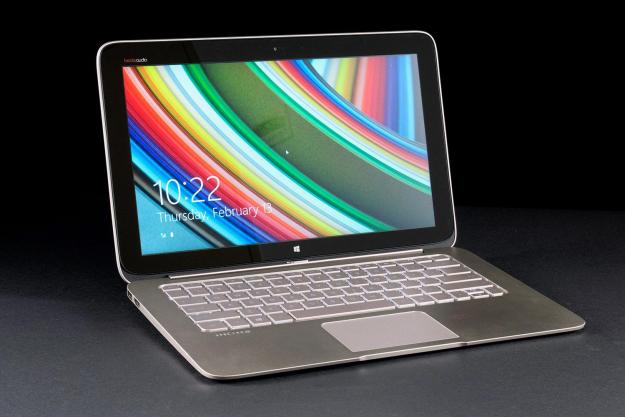 “The new Spectre 13t x2 is essentially the 13t ultrabook with a tablet bundled into the package.”

Of all the permutations of convertible laptops we’ve seen so far, one has become a clear winner; the dockable. Versatile and powerful, dockable systems let the user remove the display entirely and use it as a stand-alone tablet, effectively turning the keyboard into a glorified dock.

However, dockables are not perfect, and many are held back by small displays and cramped keyboards. HP, apparently noting this issue, opted to go big with its new HP Spectre 13t x2. Rather than a 10 or 12-inch screen, HP has served up a full 13.3 inches of diagonal space.

This healthy scoop of screen real-estate is joined by an Intel Core i5-4202Y processor,4 GB of RAM and a 128GB solid state drive, all for $1,099. Other Ultrabooks offer similar specifications, but the Core i5-4202Y is a low-voltage processor we’ve not yet had the chance to test. Let’s see if this versatile notebook offer the grunt that users need, or if power been compromised in favor of portability.

Chrome HP logo aside, the Spectre 13t x2’s heritage is quickly recognizable. Like the company’s other notebooks, the Spectre 13t x2 features metallic construction, rounded edges, a glossy black display bezel and square, silver keys. Nothing about the system stands out, but nothing offends either.

Simply put, the Spectre 13t x2 benefits from quality construction. The keyboard dock is rock-solid, panel gaps are small, and materials are pleasing to touch. Bulk is an issue though, because the system weighs almost four and a half pounds and the display is .44 inches thick. The tablet alone is well over two pounds, which feels cumbersome (unless your name is Shaq or LeBron, of course).

The display disconnects from the dock via a sliding hinge that’s easy to use, though it’s not as smooth as the push-button disconnect on the Asus Trio. The Spectre 13t x2 has an issue with balance too, as tilting the display all the way back makes the system prone to flipping on its lid if the touchscreen is used.

Port selection consists of two USB 3.0, HDMI, a combo headphone/microphone jack, a card reader – and that’s it. While this is an adequate array of connectivity, we wished the Spectre 13t x2 included an additional video-out port and an additional USB port.

All the keys you need

Unlike smaller dockables, the Spectre 13t x2 boasts a spacious keyboard with a conventional layout and large key caps. While tactile feel could be better, keys bottom out definitively, providing a good sense of what’s happening while touch-typing. We had little use for the backspace key, as typing errors were infrequent.

Backlighting consists of just one brightness setting. We found it a bit too luminous for use in a dark room, though we’d rather have it than no backlighting at all. A few keys, including the “up” arrow and the “~” key, were much brighter than those around them, but light leak was never serious issue.

The awesome, extra-wide “Control Zone” touchpad from the HP Spectre 13t unfortunately doesn’t make the leap to the Spectre 13t x2. Instead, there’s a standard pad measuring about 3.5 inches wide and 2.5 inches tall. Though not large, the touchpad is responsive, and pulling off gestures was easy.

The Spectre 13t x2 wears a 1080p 13.3-inch touchscreen as a standard feature. Like its Ultrabook cousin, the Spectre 13t, the x2 scored well in our tests. It produced 99 percent of the sRGB gamut, along with 75 percent of the Adobe RGB gamut. We also got strong black level results. Meanwhile, contrast came in at a respectable 670:1.

All of these scores are at least good, if not excellent, and beat most alternatives. The Asus Trio managed a lower contrast ratio of 600:1 due to weak black levels, while Dell XPS 12 only rendered 69 percent of the sRGB gamut. Other options, like the Samsung Smart PC Pro 700T and Lenovo Yoga, are even farther behind. The only convertible with a clearly superior display is the Acer Aspire R7, which scored a slightly narrower gamut but also a far superior contrast ratio of 780:1.

There is one weakness though; brightness. We measured a maximum output of 268 lux, which is usable in most situations, but not enough for comfortable use outdoors or in direct view of sunlight.

Like most HPs, this dockable features Beats Audio, but in this case, it seems to add little aside from a set of advanced audio controls. Maximum volume isn’t particularly loud, bass isn’t strong, and the mid-range can be muddy. External speakers or headphones are recommended.

Lower the voltage, lower the performance

HP had a specific goal when they designed the Spectre 13t x2; they wanted to make it fanless. To achieve this, they equipped it with an Intel Core i5-4202Y CPU, which fits inside a thermal design power of just 11 watts (most 4th-gen dual-cores need 15 watts). While this reduces power consumption, it comes at the expense of performance; SiSoft Sandra’s Processor Arithmetic benchmark returned a score of 28.68 GOPs, while the 7-Zip de/compression benchmark came to a result of 5,340 MIPS. These numbers are well behind the Asus Trio, which scored 45.6 and 7,995, respectively.

The tables turned in PCMark 8’s storage benchmark, however, where the Spectre scored 4,902 to the Asus Trio’s 2,672. The Spectre’s result is about average for a convertible with a solid state drive, and indicates fast transfer rates along with lightening-quick response times.

3DMark put the Y-series processor back in its place, however, with a Cloud Gate score of 1,584 and a Fire Strike score of 190. Both figures are extremely low. By comparison, the Trio manages 4,379 and 620.

We also tested real-world gaming using League of Legends. At medium detail, the system managed to crank out an average of 32 frames per second with a minimum of 24 and a maximum of 39. Upping the visuals to very high decreased performance to an average of 24 FPS with a minimum of 17 and a maximum of 28. As the numbers indicate, medium detail was playable, but very high was sluggish and less fun to play. These numbers are roughly half of what the ASUS Trio got, so it’s clear that the Spectre 13t x2 is not a great choice for games.

A tale of two batteries

Unlike the Asus Trio, which switches to Android and a low-power Atom processor when the display is used as a tablet, the Spectre 13t x2 doesn’t depart from Windows or its Intel processor. Battery, processor, speakers, hard drive, wireless card are all in the display. Something has to give, and that something is the battery.

The tablet, on its own, scored just four hours and six minutes of endurance in the Peacekeeper web browsing benchmark. That figure extended to six hours and forty-nine minutes in the less demanding Reader’s Test, but both numbers are disappointing. The Trio lasts about a half-hour longer as a tablet and the Samsung Smart PC Pro 700T lasts almost an hour more. And all three are put to shame by the iPad and the Samsung Galaxy Note 10.1.

The Spectre 13t x2 strikes a better balance than most dockables.

Our watt-meter indicated 11 watts of power consumption at idle with the display at maximum brightness. This is a bit surprising; alternatives like the Samsung Smart PC Pro 700T dockable and Acer Travelmate P645 ultrabook, draw roughly the same amount.

At load however, the Spectre 13t x2 drew a maximum of 22 watts, which ties the Dell XPS 12 for the second-lowest result we’ve recorded on an Intel Core system. The Sony Vaio Pro 13, at 18 watts, is tops in this area.

As mentioned earlier, this dockable is fanless. In the computer world, that’s a synonym for silent. There’s no fan noise and, because the storage is solid state, no hard drive noise either. The complete lack of offending tones will absolutely enthrall users who hate noisy laptops.

Surprisingly, the lack of a fan does not translate to excessive heat. The HP barely warms up above room temperature during normal use, and even stress tests raise the temperature to just 81.5 degrees Fahrenheit. These results deserve praise, as heat is a problem for some other dockables. The Samsung Smart PC Pro 700T, for example, reached a scorching 117 degrees in our stress test.

The load of pre-installed apps is light and, for the most part, useful. There’s a full install of Adobe Photoshop Lightroom along with HP Connected Photo and HP Connected Drive, two HP cloud services.

McAfee LiveSafe Internet Security is installed, but HP covers the first year, which means there’s no reason for the program to bug you with prompts and advertisements. The only pop-ups that appeared were from bundled HP backup software, and they showed on only two occasions.

The HP Spectre 13t x2 is very similar to the standard HP Spectre 13t ultrabook. Though the latter offers slightly better performance, the difference isn’t noticeable in day-to-day use, and battery life is almost identical. The x2 is about a pound heavier, is a tenth of an inch thicker, and will set you back only $100 more.

The only problem is the tablet, which is too large and too heavy for most people to use comfortably for any length of time, and suffers from poor battery life. While some might view it as a bargain (you’re essentially getting the Spectre 13t and a tablet for only an extra Benjamin), we think the quality of the tablet experience is well below an Android or iOS alternative.

Still, going big wasn’t the wrong move. Unlike smaller alternatives like the Asus Trio and Samsung Smart PC Pro 700T, which aren’t particularly excellent in either role as a notebook or a tablet, the HP Spectre 13t x2 is at least a solid notebook. The display is great, battery life is adequate, and the keyboard is comfortable. This system, like all of its breed, is a compromise, but the x2 strikes a better balance than most.