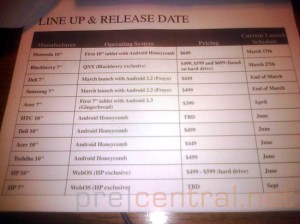 Hewlett-Packard’s first tablet, the TouchPad, will reportedly arrive in June, according to knowledgeable unnamed sources who contacted Pre Central. The 9.7-inch tablet will sell for the price of $499 for the 16GB version, and $599 for the 32GB model. HP will purportedly also release a 7-inch TouchPad in September.

Theses rumors, unconfirmed by HP, are based upon information provided to employees of a “major US retailer” that is preparing personnel for “a year’s worth of tablets.” Evidence of the June  and September release dates comes in the form of what appears to be a product release schedule, which lists various tablets and their corresponding information.

If accurate, the listed prices for the 9.7-inch TouchPad, originally rumored to have an April release, would put the device right in line with similarly-featured models of Apple’s newly-released iPad 2.

While all tablet makers are looking to compete with Apple’s highly popular iPad line, the TouchPad seems to go at it head-on, with many specifications matching that of the iPad 2.

Both devices measure 9.7-inches. (The TouchPad is listed as 10-inches on the retailer’s product sheet.) And both come equipped with touchscreens that have 1024×768 resolution. So far, HP has announced only Wi-Fi enabled devices, while Apple offers a variety of 3G-compatible models.

Other specs for the ToucPad include a 1.2GHz dual-core Snapdragon processor and 1GB of RAM. HP’s device weighs only slightly more than the second-gereration iPad, at 1.5 pounds, and is 13.7mm thick. The TouchPad runs on the WebOS 2.1 operating system.

Unlike the 9.7-inch version, which was announced at the beginning of February, the 7-inch TouchPad has not been confirmed by HP. But the retailer information backs up earlier rumors that HP has plans for both a 7-inch and a 9-inch version of the TouchPad. That report, provided by Engadget, also pegs the 7-inch TouchPad (known as “Opal”) to a September release date. No price has yet been determined (or rumored) for the Opal TouchPad.

Video-editing app LumaFusion to get a Galaxy Tab S8 launch
HP Omen gaming laptops and PCs have massive price cuts today
Hurry! The Lenovo ThinkPad X13 laptop is insanely cheap right now
Lenovo leaks the world’s first gaming Chromebook — but there’s a catch
Best Apple deals and sales for October 2022
We can’t believe how cheap this HP laptop deal is
Best Buy is having a clearance sale on this fantastic 2-in-1 student laptop
Tesla just shocked everyone with its Optimus robot prototype
Best monitor deals for October 2022
Tesla AI Day 2022: Optimus, self driving cars, and everything else announced
Best iPad Deals: Latest models on sale from $299
Best home internet deals for October 2022: AT&T, Spectrum, Optimum and more
How to change the login picture on a Mac