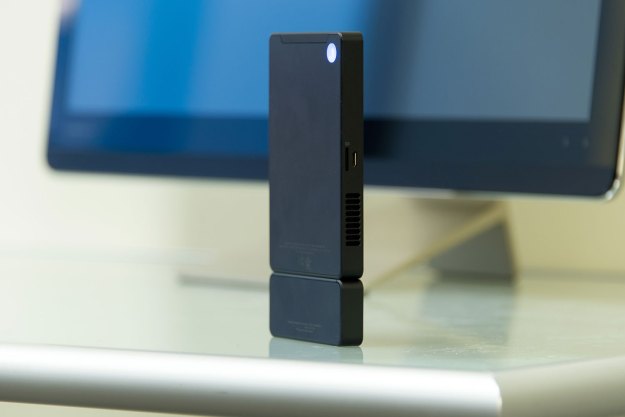 “It's hard to imagine using the Kangaroo every day, but it shines in its niche.”

Tech pundits have been announcing the post-PC age for a while now, and it’s true that people are spending more time on mobile devices and less on computers. But even today, relatively few people can live their life entirely from a smartphone. There are occasional bits of software that require Windows, for example, and tasks like design, writing, and number-crunching just work better with a keyboard and mouse.

But what if you could enjoy that PC-specific work on a small, affordable device that you can easily carry with you everywhere? That’s the idea behind the Kangaroo, from InFocus, an easily pocketable black box that’s actually a full computer. Buy multiple docks, and you can use it with multiple workstations. Plug it into your iPad, and you’ve got access to Windows 10 on that screen, as well – a built-in battery lets you do this away from outlets.

At $100, the Kangaroo is about the cheapest Windows 10 device on the market right now – it’s $50 cheaper than the Intel Compute Stick. This is possible because of affordable components. It has an Intel Atom processor and only 2GB of memory.

What kind of experience does such a dirt-cheap Windows device give you? Would you want to use such a thing for your day-to-day computing? And just how useful is a portable computer without a built-in display, or input device?

It’s hard to believe, at first glance, that the Kangaroo is a computer. It looks more like an enclosure for a small external hard drive, though actually it’s a full desktop, albeit one based off hardware designed for entry-level laptops.

The Kangaroo is an attractive little device, and it feels solid. The top and bottom panels are black aluminum, with plastic around the rim. A LED light lets you know when the computer is on (solid blue) and when it’s charging (orange, fading in and out). On the right side of the box you’ll find a power button and a fingerprint scanner.

The Kangaroo itself has one main port, which connects the device to the included dock. This dock offers four ports, from left to right — HDMI, USB 3.0, USB 2.0, and power.

Some convenience has been sacrificed in the name of portability. The lack of a dedicated audio port means you’ll need to rely on HDMI or Bluetooth for sound, and only having two USB ports could present problems as well.

If you want to plug both a separate USB mouse and keyboard into the device, for example, you won’t have a port free for external storage (without the use of a USB hub or unified mouse/keyboard input, at least). Only offering two USB ports is common on laptops, but those devices come with built-in keyboards and trackpads, so it’s less of an issue.

There’s nothing flimsy about the Kangaroo.

Bluetooth 4.0 support means you could use a wireless mouse and keyboard instead. You’ll need to rely on Wi-Fi for Internet, as there’s no Ethernet port.

Kangaroo’s website says other docks, presumably with more ports, are on the way.

On the side of the Kangaroo itself you’ll find a MicroSD slot, so you can supplement its 32GB of internal storage without using one of its precious USB ports. There’s a MicroUSB slot beside this, but it’s not for data: it’s actually for charging. The Kangaroo has a battery, allowing you to use it on the road while connected to an iPad. This port means you can charge the Kangaroo with a MicroUSB cable and your phone’s charger, instead of the comparatively bulky AC adapter that connects to the dock.

You get the performance you pay for

The Kangaroo’s out-of-box performance feels great for a $100 machine. On a Full HD television, Windows 10 was responsive, and basic tasks like browsing the Web or editing Word documents didn’t cause any problems. Playing HD video isn’t an issue, so if you want to use this as a streaming box you might well be happy with it.

But don’t expect to do much more. It has an Intel Atom x5-Z8500 processor, which is designed with portability and energy conservation in mind. And its 2GB of RAM only just meets the minimum requirement for 64-bit Windows 10.

The experience reflects that. We fought with crashes and slowdowns in day-to-day use. Our benchmarks proved the point further, showing that this probably isn’t something you’ll want to use as your primary computer. In the Geekbench benchmark, for example, the Kangaroo scored 874 in the single core test and 2,525 in the multi-core test.

Compared to any laptops we’ve looked at recently, that’s off-the-charts low – only the Asus Flip TP200SA does worse, and we blasted that device for having an “unforgivably slow processor.” The mid-range Toshiba Satellite Radius 14 laptop gives you some context about this performance, nearly doubling it in both metrics. Still, compared to its closest competitor – the Intel Compute Stick – the Kangaroo wins, just barely.

The Kangaroo is only portable if you have a screen and input devices to use wherever you’re going.

The hard drive is similarly slow. CrystalDiskMark reached a read speed of 153.3 megabytes per second and a write speed of 51.1MB/s. That’s low for a solid state drive, but it’s not surprising considering high-end SSDs cost more than the Kangaroo itself. The Intel Compute stick actually scored a little better on this metric, with read speeds of 164.9 MB/s and writes of 78.2MB/s.

It’s pretty obvious the Kangaroo wasn’t designed to be a gaming rig. Our 3D Mark benchmark results back this up. We saw a Skydiver score of 1,079. While that’s much better than the Intel Compute Stick’s score of 402, it’s not much consolation. The Toshiba Satellite Radius 14, a budget notebook that typically sells for $450, scored 4,599. Dedicated gaming rigs routinely score in the tens of thousands.

You can’t expect to play 3D games on this device, and even some simpler 2D games could end up stuttering. That isn’t surprising, considering the specs and price-point, but it’s worth noting all the same.

Is that a PC in your pocket?

The Kangaroo will fit in your pocket easily. At approximately 3 inches wide, 5 inches long, and only half an inch thick, it’s not much bigger than a modern smartphone. And it doesn’t weigh much more, either, at a hair less than half a pound without the adapter and power cord, and about one pound with them.

The power cord is surprisingly big for such a small device, and looks like a laptop cable. But there’s a workaround — you can charge the Kangaroo without a MicroUSB cable, thanks to the port on the side of the case itself. This helps a lot for on-the-go usage.

The Kangaroo is only portable if you have a screen and input devices to use it with wherever you’re taking it. You can buy a second dock with a power cable for $40, meaning you could have monitor/mouse/keyboard setups in multiple locations — for example, one at work and one at home.

There’s also the built-in battery, which in our tests supported just over three hours of web browsing. A battery is unusual for a desktop computer – even on this portable.

You can use it with an iPad, but it’s not much fun

If you own an iPad running iOS 8 or later, the free OSLinx app gives you a unique feature — access to Windows 10 on your Apple tablet. Just plug your iPad into the Kangaroo’s USB port, then open the app to get started. It connects quickly, showing you the Windows desktop.

You can use the Kangaroo with an iPad as a display, but expect a bit of lag.

You can tap with your fingers to mimic a mouse click, and even use multi-touch gestures. But you won’t use it long before noticing lag. Tasks like clicking and dragging cards in Solitaire work well enough that you can see what’s going on, but aren’t smooth. Watching videos this way is out of the question – you’ll be skipping frames constantly.

The experience is sufficient to quickly check a PowerPoint presentation on your way to work. Just don’t expect to quickly edit it, as the app doesn’t provide any on-screen keyboard for typing. You’ll need to enable the Windows one yourself if you want to type, then turn it off again when you get back to your desk.

That limitation, combined with the lag, makes iPad compatibility feel like a gimmick instead of a productivity feature.

No fans, and not a lot of heat

This is a fanless device, meaning you’re never going to hear it. Yet the Kangaroo also keeps its cool. During our benchmarks the aluminum case occasionally felt warm to the touch, but never uncomfortably hot. That makes sense, as the Intel Atom line of processors don’t use much power.

The Kangaroo comes with a one-year limited warranty, which covers any manufacturer defects.

Logitech Wireless Touch Keyboard ($34.69)
If you’re using the Kangaroo with your media center, this combined mouse and keyboard leaves the USB 3.0 port open for a drive full of videos.

It’s easy to see the InFocus Kangaroo as a series of potential answers without questions. It could be a failure of imagination on our part, but it’s hard to picture someone setting up multiple desks with input devices and monitors (devices that probably end up costing more than the Kangaroo itself) just to migrate between them with a portable computer. A laptop will easily cost five times as much, sure, but it works everywhere — not just where peripherals are handy — and in most cases offers significantly better performance.

Having said that, we can imagine uses for a $100 device that runs Windows 10. You could hook it up to your TV and use it to watching streaming media, for example, or use it to set up a kiosk. It could display a PowerPoint presentation for you, or show a slideshow of photos at a conference. You can probably imagine all sorts of uses for this machine, and at this price point a single purpose could be enough.

For general computing, though, we’re skeptical. It’s a great price point, but you’re going to run into performance frustrations regularly, and the lack of built-in input devices really limits the appeal. A laptop is a better bet for most people.

Best MacBook Deals: Save on MacBook Air & MacBook Pro
Samsung’s 43-inch mini-LED monitor looks stellar — if your desk can handle it
AMD Ryzen 7000: availability, pricing, specs, and architecture
The best game-streaming services for 2023
Microsoft Word vs. Google Docs
Turns out DirectStorage isn’t killing frame rates in Forspoken after all
Best laptop deals: Save on Apple, Dell, HP and Lenovo
Wi-Fi not working? Here’s how to fix the most common problems
The best Chromebooks for 2023
Best microSD cards in 2023: top picks for your computer, camera, or drone
Ranking all 12 versions of Windows, from worst to best
If you think PCs are dying, you haven’t been paying attention
What is ChatGPT Pro? Everything we know about its response to capacity issues