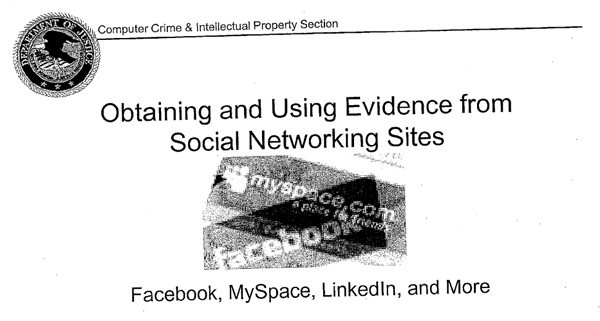 You already knew an ill-conceived tweet, status message or photo album could cost you your job when your boss found out what you really thought of him, but as it turns out, it can also land you in jail. Although it may not come as a surprise to the tinfoil hat crowd, the U.S. federal government actively uses the likes of Facebook, MySpace and Twitter to gather evidence on criminals.

The Electronic Frontier Foundation scraped up hard proof of the Uncle Sam’s social networking habits by filing a Freedom of Information request, receiving documents it published online on Tuesday, including a 2009 training course for the IRS [PDF] and a Department of Justice presentation [PDF].

According to the presentation, social networks can be used by government workers to reveal personal communications, establish motives and personal relationships, provide location information, prove and disprove alibis, establish crime or criminal enterprise, and to witness instrumentalities or fruits of crime.

In other words, while a well-timed tweet could be used to establish that you weren’t even in town when the lawnmower was stolen, or a friendly wall post might dissolve your motive to burn down your friend’s shed, posting those photos of your cache of stolen weapons or of you wearing the jewelry you swiped in a heist last week might turn Johnny Law onto what you’ve been up to.

Besides noting what information each social network provides, the presentation describes which networks have been more cooperative than others in responding to law enforcement “emergency requests,” as well as their data retention policies. For instance, while Facebook is described as “often cooperative,” Twitter refuses to preserve or produce data without legal process.

Although the IRS training course makes it clear that workers are not to assume false identities in the pursuit of personal information, the DoJ documents paint of much vaguer picture of what is and is not legally admissible when fishing social networks for evidence. One line asks, “If agents violate terms of service, is that ‘otherwise illegal activity’?” without providing an answer

According to Marc Zwillinger, a former U.S. cybersecurity prosecutor who spoke with the Associated Press, the same rules that apply to undercover agents in the real world likely apply to them on the Web, giving them the freedom to impersonate friends and possibly even family members and spouses – which are out-of-bounds in in-person undercover work.

Hackers may be hiding in plain sight on your favorite website
Spellcheckers in Google Chrome could expose your passwords
Your Steam account could be in danger because of this new phishing technique
Hackers can now sneak malware into the GIFs you share
North Korean hackers create fake job offers to steal important data
This powerful student laptop is on sale at Dell this weekend
Hurry! The Lenovo ThinkPad X13 laptop is insanely cheap right now
Image-generating AI Dall-E is now free for anyone to play with
The best motherboards for Ryzen 7000 available right now
HP Omen gaming laptops and PCs have massive price cuts today
We can’t believe how cheap this HP laptop deal is
Best Buy is having a clearance sale on this fantastic 2-in-1 student laptop
Tesla just shocked everyone with its Optimus robot prototype