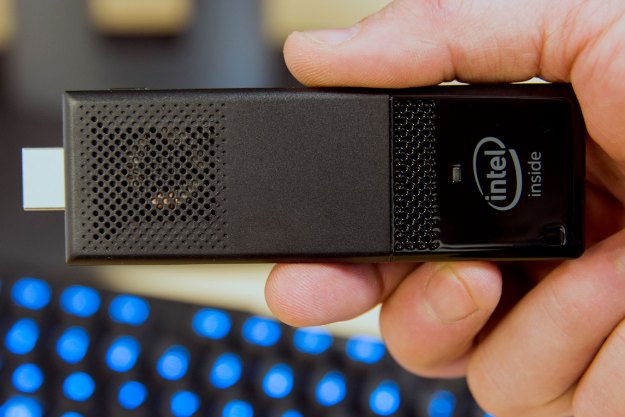 “The 2016 Compute Stick is impressively small, but underpowered for many tasks.”

PCs are like dogs. They come in all shapes and sizes, so much so that it’s weird to think they’re all the same thing. A tiny Yorkshire Terrier and a massive Great Dane are the same species, even if it’s hard to believe at first glance, just as the Intel Compute Stick is a PC, no matter how little it might resemble one.

The Compute Stick is the latest in Intel’s efforts to breed new kinds of PCs that fill new niches. First revealed at CES 2015, it launched onto the market in May that year and was marketed as a general purpose computer you can quickly and affordably add to any TV or monitor, with a particular emphasis on streaming media.

While the original Compute Stick was impressive in theory, it disappointed us in practice. We didn’t like the underpowered processor, shortage of USB ports, and occasionally flakey Wi-Fi connection.

This year’s model, priced at $159, comes with an Intel Atom x5-Z8300 Processor, 2GB of memory, and 32GB of storage. But are the improvements enough to move this little stick from gimmick to practical PC? Or does it remain more of a curiosity?

A PC made to be hidden

The Intel Compute Stick, at first glace, looks like a blown-up USB drive. It can’t quite fit in the palm of your hand, but it’s not far off, and it’s amazing to think that everything in a desktop PC is included in this little stick.

An HDMI connector sticks out of the front, which you can plug directly into your display, if it fits. If other ports and cables get in the way, an included extension cable helps avoid the problem. Even if it does fit snugly, it won’t be neat and tidy. You’ll also need to plug in the power adapter, and any peripherals you might have. Most users will have three or four cords dangling from the Compute Stick.

Otherwise, there’s not much to remark on. This is a device that’s designed to sit behind your display, not one that’s meant to be seen. The simple black case has more texture to it than last year, and looks nicer as a result. But no one’s going to buy this PC because of how it looks.

A big complaint we had with the 2015 version of the Compute Stick was the lack of connectivity. That model offered only a single USB 2.0 port.

This time around there’s two USB ports — one 3.0, another 2.0. It sounds basic, but this means you can plug a separate keyboard and mouse in without a USB hub. It’s even better if you buy a wireless keyboard and mouse that only use one dongle. That leaves the USB 3.0 port free for a USB key or external hard drive, which could come in handy given the relatively tiny 32GB internal hard drive.

Wireless networking is another weak point of the old Compute Stick that’s solved in the new model. With 802.11ac capability and improved internal antennas, we didn’t notice any hiccups while browsing the web. Bluetooth 4.0 support rounds out the wireless capabilities, giving you another potential way to connect peripherals.

There’s also a MicroSD card slot, giving you a tidier option for supplementing memory should the need arise. Overall, it’s hard to complain about inputs given the size of the stick. The dual USB ports bring the Compute Stick in line with many laptops on the market now.

Somehow slightly slower than before

You’d think so, but Geekbench tests tell a different story. The 2016 Compute Stick scored 729 on the single core benchmark and 1,950 in multi-core, two results that are slightly lower than last year’s model. We were a bit skeptical about the result, so we referenced it against other Geekbench scores posted online. It does not appear to be an exception.

To be fair, the difference between this and last year’s model isn’t enough to be noticeable in day-to-day usage, and processing power is not the key selling point here. As the above chart shows, even modest laptops like the Dell Inspiron 11 3000 more than double all these devices for performance. But considering poor performance was one of the weaker parts of the Compute Stick last year, it’s disappointing to see there’s not been an improvement.

The hard drive also tested slower than last year, but again not by much. Our CrystalDiskMark benchmark showed a read speed of 149 megabytes per second, and a write speed of 58.8MB/s.

That’s not the sort of difference most users will notice, and you can’t expect a $160 device to offer top-range SSD speeds. But the regression is still unfortunate. The HDTune benchmark showed an average write speed of 108.9MB/s.

These speeds are slow considering the Stick uses a solid state drive – they’re about what you would expect from a conventional hard drive. However, given that many high-end SSDs cost more than the Compute Stick itself, it really isn’t surprising to see drive performance isn’t the device’s forte.

The extra USB port is a big upgrade, as a USB mouse and keyboard can be connected without issue.

The poor performance scores were reflected in our day-to-day usage. We wouldn’t call the Compute Stick unusable, but we also can’t recommend it for day-to-day computing. Even a simple task, like opening a web browser, takes much longer than on other modern PCs. And the measly 2GB of memory means opening more than a few applications is a bad idea.

Once a program is up and running, the Compute Stick will do its job. We did some writing, some web browsing, and even some image editing. The Stick did the work, even if it was a case of “slow and steady wins the race.”

1080p video — from YouTube, Hulu or local files — worked perfectly. The only thing that absolutely did not work was our attempt to encode a 4K video in Handbrake, which is part of our normal test suite. Of course, given the Stick’s hardware, it’s not odd to see it stumble in that area. Our Handbrake test strains even the quickest systems, and it’d take hours to finish even if it did succeed.

Graphics: better than last year’s nothing

The improvement is nice, and is likely the reason while the 2016 Compute Stick handles HD with such ease. Yet these scores are still extremely low, even compared to laptops that can barely handle gaming. The Dell Inspiron 11 3000, for example, struggled to run modern games with its higher score of 1,225.

Most games will load, but they won’t play at anything approaching an acceptable framerate. Heroes of the Storm, for example, loaded without problems, but with an average frame rate of 10 frames per second on the lowest possible settings. Counter-Strike: GO was the same, at an average of 10 FPS.

Good for streaming, but expensive in that niche

I installed Kodi on the Compute Stick, and connected the software to my DVR over the network. It worked perfectly. The picture was smooth, and the user interface ran without a hitch. HD channels played back at the full framerate, without buffering. It’s easy to imagine using this little computer for streaming media full-time.

But there’s a hangup, and that’s the price. For $35 you can get a Google Chromecast for streaming video, and watch anything online using your TV. If you want something more powerful, the $130 Roku 4 and the $150 Apple TV are also cheaper than the $160 Intel Compute Stick, and come ready with remote controls and couch-friendly user interfaces.

They don’t have the flexibility of Windows 10, and that flexibility is the only reason I could connect to my DVR using software I installed myself. None of those other boxes could have pulled that off specifically. So the question is whether you value the flexibility to do precisely what you want enough to put in the extra time and money.

Intel’s warranty covers the device for one year, which is standard for laptops and desktops alike.

Stick of all trades, master of none

The 2016 version of the Intel Compute Stick fixes many of the common complaints about the 2015 version. There’s now two USB ports, the Wi-Fi works better, and the video performance is vastly improved. It’s a good example of what a PC smaller than the average chocolate bar can do.

But the question remains — would you want to use this as your only PC? Likely not. It’s not powerful enough for serious multi-tasking, and if there’s a single purpose you have in mind there’s likely a single purpose device on the market that’s cheaper. We discussed streaming above, but what if you just want a quick way to browse the web? The ChromeOS based ASUS Chromebit can handle that for $85. Do you want a simple file server, or a hobby PC to mess with? A Raspberry Pi 2 is a lot less expensive. And so on.

Even among undersized PCs, the Compute Stick falls short in performance to the Kangaroo Portable. Sure, that device is significantly larger than the Compute Stick, but at $100 it’s also $60 cheaper.

The Compute Stick remains an impressive feat of engineering. It’s amazing that full computer running Windows 10 can fit in so small a space. But it’s still not clear why you’d want one.