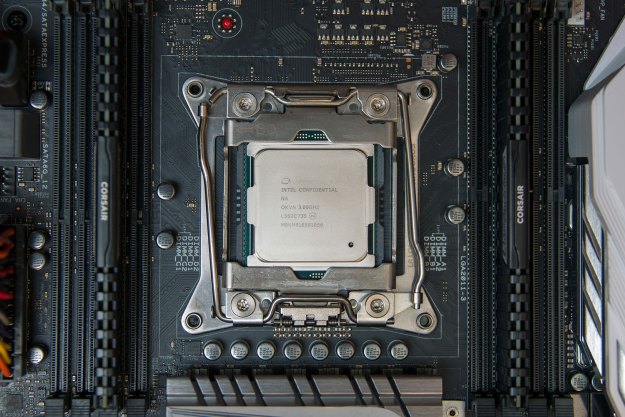 “Intel’s royal ten-core flagship is the fastest consumer chip on the planet – and the most expensive.”

The Core i7-6700K is often thought as quickest Intel chip, but performance seekers know the true limit of modern consumer CPU power is found in the Extreme Edition, a special set of Intel hardware that runs on its own, separate chipset. Now, the latest Extreme Edition is here, in the form of the massive Core i7-6950X.

With ten cores, this chip beats Intel’s old record for core count on a consumer CPU by a pair. Yet the clockspeed still sits at a comfortable 3GHz base clock, with a 3.5GHz Turbo Boost maximum. It’s packed to the brim with new features designed for enthusiasts and high-end gamers, like Turbo Boost 3.0, granular overclocking controls, and four channel DDR4-2,400MHz support.

But like its predecessor, the Core i7-6950X carries an extravagant price tag. This time around it falls around $1,800, almost twice the price of last year’s top-end chip.

Like Intel’s Skylake family, Broadwell-E is built on a 14nm production process, which has allowed pretty much everything inside the chip to shrink considerably. Despite the bump from eight to ten cores, there’s actually a bit of spare room left on the die.

Intel’s generation names are a little confusing when dealing with these Extreme Edition chips. The top-end models use the same die size as the current generation, but the layout of the previous. The last generation was Haswell-E (4th-generation Core), which launched after Broadwell (5th-generation Core). This time, the new family is Broadwell-E, which is again launching after the release of the next architecture bump, known as Skylake.

While this might seem a strange approach for Intel to use with its most powerful hardware, delaying it allows the company time to refine the chips for use in extreme performance scenarios.

The past few generations of Intel processors offered Turbo Boost 2.0, a feature that tries to squeeze every drop of potential performance from a given processor. When there’s extra power available, or the chip is running at lower temperatures, Turbo Boost increases the clock speed past its base rate, up to the chip’s Turbo Boost maximum. When it warms up, or more cores need power, the clock speed drops back down to, or under, its base clock. In this way a chip is quick when it needs to be, yet uses less power when it’s idle.

Turbo Boost 3.0 can lower the power supplied to each core, and boost one core’s clock speed as needed.

The new Extreme Edition goes a step further with Turbo Boost 3.0. This isn’t a replacement of 2.0, but instead adds a new trait. Turbo Boost 3.0 kicks in when an application is demanding performance from a single core.

By identifying applications that place heavier than average demand on a single core,Turbo Boost 3.0 can lower the power supplied to each other core and boost one core’s clock speed as needed. Intel doesn’t list a maximum clock speed however, as the rate will depend on each chip’s stability. Our testing was not able to reveal any Core that exceed the 6950X’s stated Turbo Boost maximum. However, we’re not ready to conclude what this means for the value of Turbo Boost 3.0, because the tools we use to analyze speed had difficulty identifying the chip (as it was, at the time, unreleased).

The X99 chipset lives on

As expected, the Core i7-6950X also has Hyper-Threading. While there are only ten physical cores on the chip, each core is capable of handling two threads at once. To software, the 6950X actually looks like a 20-core chip. That can boost performance in software designed to use as many threads as possible. In everyday use, however, it’s not relevant.

New processors also mean new hardware support that extends to other parts of the system. In this case, it means support for 4 channel DDR4-2400, up from DDR4-2133 on Haswell-E. On top of that, the new 6950x an extra 5MB of Intel Smart Cache over the 5960X, bringing the total up to 25MB. This is an easily overlooked point that contributes to the 6950X’s performance. A Core i7-6700K has an 8MB cache, by comparison, so it must return to RAM for data more frequently than the 6950X (and other Extreme Edition chips).

While much has changed, much has stayed the same. The new Broadwell-E chips, including the Core i7-6950X, are all drop-in compatible with X99 motherboards, although some may require a BIOS update.

As before, the chips support up to 40 PCIe lanes, two at 16x, and one at 8x. What you won’t find is an integrated graphics chip, as a system with a ten-core CPU and no dedicated GPU would be an oddity.

Hello? Is there anybody out there?

Normally at this point in the review we’d also discuss the competing chips. But Intel is only competing with itself. The top-end chip we have the pleasure of reviewing, the Core i7-6950X, is priced at almost $2,000, around ten times the price of AMD’s highest-end desktop CPU, the FX 8370.

Instead, Intel’s the challengers are last year’s Core i7-5960X, which fits in the same slot, and the Broadwell-E’s new siblings. The Core i7-6900K in particular comes in at right around $1,000, the same as the highest-end Haswell-E, but with a .2GHz higher base clock and Turbo Boost, plus all of the new features.

At the same time, these chips are only targeted at the most demanding power users and enthusiasts. A Core i7-6700K is already going to be fast enough for almost everyone, so the X99 platform’s main draw is overclocking and SLI support, thanks to its expanded PCIe lane support. That kind of user isn’t afraid of spending thousands of dollars on phase change liquid cooling and 4K gaming setups, so that extra $1,000 might not be that tough to stomach in the name of vanity.

Now that the features and buzzwords are out of the way, we can get down to real performance numbers. Without further ado, here’s how the Core i7-6950X runs on paper.

Depending on the test, these scores range from excellent, to the best we’ve tested to date. The Handbrake score of just 3 minutes and 33 seconds is the best in recent memory by almost a minute, and averages just under 30 frames per second while converting, which is extremely impressive on its own.

Our 7-zip compression tests were just as impressive, and the i7-6950X’s overall score was only beaten by one system, an overlocked Origin Millennium from late 2014. Compared to the i7-5960X, the new chip improves performance by about 20 percent — in heavily multi-threaded applications, at least. That’s not groundbreaking, but it’s a respectable gain.

Indeed, overclocking is the reason the 6950X doesn’t sweep the board. The Origin Millennium from 2014 overclocked the 5960X by 1.5GHz, a truly staggering increase. We expect that manufacturers will do the same to the 6950X – at which point it should easily defeat everything we’ve ever reviewed, and likely by a wide margin.

Push it to the limit

Speaking of which, Intel has introduced new, more granular overclocking features to help owners push the 6950X to its limit.

The most interesting new feature is precise per core overclocking. Overclocking is all about reaching the highest speed possible without sacrificing stability, but some cores are more stable than others once temperatures start to grow.

Users can set individual cores to higher clock rates, while keeping less stable chips from causing issues. It’s not an option most consumer levels users would even think of touching, but at the top end, every MHz counts.

In pursuit of that goal, Intel has improved the features that help overclockers identify and plan for higher speed profiles. The first is AVX Ratio Offset, which helps tighten up the relationship between overhead and clock speed. The second is improved control over voltage at the chip level, for overclockers who really go above and beyond.

We’ve tested the chip’s overclocking to a limited extent, but haven’t had enough time to reach a verdict on the ease of the process and the maximum speed users can expect. We’ll address overclocking with more detail in a later article.

We spend a lot of time reviewing fast computers, but even so, the i7-6950X feels snappier than usual. Its new features are also likely to be more relevant to the type of user attracted to this chip, and finely tuning an overclock or tweaking out a little more performance is an added bonus.

Performance is as solid as ever on the newest Extreme Edition chips, but that’s not the only reason to make the move to the X99 platform. The chipset can support up to 40 PCI Express lanes, for better SLI and CrossFire performance. And memory support has been upgraded to DDR4 2400 from DDR2133.

The downside, of course, is the price. Intel quotes an OEM price of $1,723. End-user pricing is likely to be a bit higher. That’s more than an entire computer with a still quite powerful quad-core Intel chip, like the Core i7-6700K. From a value perspective, there’s no question the Core i7-6950X falls behind.

But the 6950X isn’t about value. It’s about pushing the limit of consumer PC performance. Most people don’t need this 6950X, true — but it does indisputably raise the performance bar, and crowns itself the new king of consumer PC hardware.