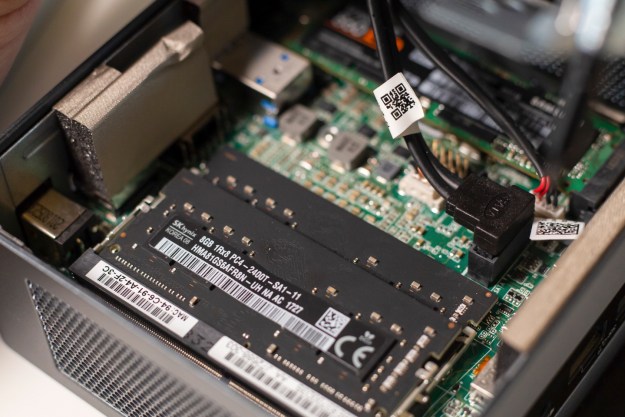 “Intel’s NUC is tiny in size and price, but not in performance.”

Most people still think of a tower PC when they buy a desktop. Yet there is another option. Smaller desktops have existed for years now, and Intel’s Next Unit of Computing – commonly abbreviated as NUC – has led the way.

Intel uses NUC to prove what its hardware can do in a small footprint, but Intel also sells the NUC to home users. It’s even consistent with updates. The “Bean Canyon” NUCs, as they’re called internally, are the newest mainstream option. The NUC 8i7BEH we received for review retails for $480 and has an Intel Core i7-8559U. That’s a low price for a powerful processor.

There’s reason for that – it’s a kit PC. RAM, a hard drive, and an operating system aren’t included. Is NUC worth going to the trouble of building it out yourself?

It’s a box, but a small one

While the internals of Intel’s NUC have changed drastically over the years, the basic footprint remains the same. Our review unit was a tiny box, about five inches on a side and two inches tall. The entry-level models, with less powerful processors, are about half as thick. It’s clad in dark gray metal not unlike a Mac Mini, but the top is glossy plastic. The design puts function over form. It’s simply a box. It’s good, then, that the NUC is small enough to hide in a drawer or behind a monitor.

You might think the NUC’s size prevents upgrades. Think again. This is a kit PC, so easy access to the guts is essential. That means you can open the NUC by unscrewing the four feet on its bottom. With those removed, you detach two cable-in cables and slide out the bottom. You then have immediate access to two RAM DIMM slots and the M.2 solid state drive slot. Our model also supported a SATA hard drive, located in the top of the NUC, though we did not choose to install one for our tests.

Upgrading a desktop doesn’t get easier than this. The fact you can easily change RAM in a system that’s half the size of a Mac Mini makes the NUC’s easy access even more remarkable.

Connectivity is solid, too. You’ll find four USB-A 3.0 ports (two front and two rear), joined by HDMI 2.0, Thunderbolt 3, an Ethernet jack, a microSD card reader, and a front-mounted 3.5mm audio jack. It’s a solid array of options for a small system and offers support for both current and future peripherals.

It’s a mobile processor, but a quick one

The NUC 8i7BEH1 model we reviewed came with a Core i7-8559U processor. That’s a quad-core chip with a maximum Turbo clock speed of 4.5GHz. Since the NUC we received was a kit, it didn’t have a RAM or hard drive. We installed 16GB of Timetec DDR4-2400MHz memory (in 2x8GB configuration) and a Samsung 860 Evo 1TB M.2 solid state drive.

These performance results are quite solid. According to Geekbench 4, the NUC’s i7-8559U can keep up with any Core i7 laptop, losing only to those few Core i9 models. It loses against Apple’s Mac Mini with Core i5 processor, but not by much.

Handbrake results are equally impressive. The tiny NUC doesn’t set any records, but it does best several similarly priced laptops and comes surprisingly close to full-sized desktops at and above its price range. The more expensive Hades Canyon NUC just barely defeats it.

There’s one component in the NUC 8i7BEH1 that we’ve never tested before. The integrated graphics hardware. It’s Intel’s Iris Plus Graphics 655, the most extravagant incarnation of Intel integrated graphics that we’ve tested. Intel boasted of its performance during a visit to the company’s Portland campus earlier this year.

Whether it’s worth the boast depends on your perspective. As our tests show, Iris Plus Graphics performs a bit south of Nvidia’s MX150. That means it can handle most modern games at low detail settings, and less demanding games like Rocket League are enjoyable. You can’t, however, expect to load up a game like Deus Ex: Mankind Divided and have a good time. Even Battlefield 1 is a stretch, as it averaged only 20 frames per second at 1080p resolution and Medium detail. You must bump it down to low for a reasonable experience.

Remember, this is a small system, and not a particularly expensive one. Intel’s Hades Canyon NUC is available if you do want to game. Iris Plus Graphics 655 at least makes less intensive games an option, which is more than can be said for most entry-level desktops, or even most laptops. Don’t buy this if you want to game. But do know that you can enjoy a few rounds of Rocket League if you’d like.

Intel’s latest NUC, like past models, fits snugly into its niche. Most people don’t want a small yet powerful PC that requires a little do-it-yourself work, but if you do, the NUC is the obvious choice. It’s extremely quick for its size, and not a bad performance value even compared to larger desktops. Geeks looking to simplify their desktop should take notice.

The NUC has few direct competitors. Kit PCs aren’t the most popular category. Even small desktops are rare.

Apple’s Mac Mini is one possible alternative. You can’t easily customize or upgrade it, and it’s not as small, but it does provide faster processor options and it’s far more intuitive. Intel’s own Hades Canyon NUC is another alternative, since it offers a slightly faster processor and an AMD graphics chip. It’s much more expensive however, with most retailers selling it for at least $750. The faster model, which we reviewed, is often around $1,000.

You might also compare it with mid-size desktops like the Dell Inspiron and HP Pavilion line. These often offer the same performance at a slightly lower price, but the discount isn’t significant. Keep in mind, though, that affordable desktops sometimes offer a graphics card option. That’s important if you have any plans to game.

The Intel NUC’s RAM and hard drive can be upgraded, so you can tweak it if you need most storage of memory in the future. You can’t change the processor, however. We think it’ll offer at least five years of service but may start to show its age towards the end of that.

A one-year warranty is included with the Intel NUC. That’s standard for the category.

Yes, if you’re comfortable with installing your own RAM and hard drive. The NUC does its job well, but it fits a small niche, and its small size does compromise its potential performance. Still, if you want a small and inexpensive PC, it’s hard to go wrong with a NUC.

The best Intel processors for 2022
This killer Black Friday deal on an RTX 3060 gaming laptop is still available
Best Dell XPS deals: Save on XPS 13, XPS 15 and XPS 17
Best MacBook deals: Save on MacBook Air and MacBook Pro
Best Chromebook deals: Get a new laptop from $99
Best laptop deals: Save on Apple, Dell, HP and Lenovo
This 15-inch Dell laptop is just $250 today, but it’s selling fast
All the products that Apple didn’t announce in 2022
Nvidia may be shooting itself in the foot with its new monster GPU
The most innovative laptops of 2022
How to create a calendar in Google Sheets
Discord now lets creators make money, and it’s not with crypto
Acer Swift Edge vs. Microsoft Surface Laptop 5