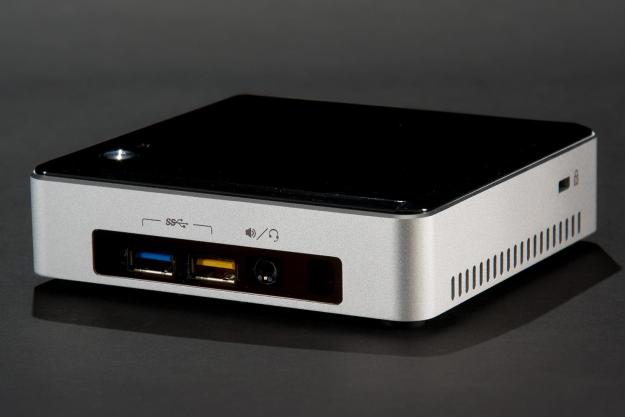 “The NUC is an odd little computer that can take some skill to start using, but it's an excellent PC for enthusiasts and hardware geeks.”

In late 2012, Intel began to talk about its Next Unit of Computing, or NUC, a tiny computer with a custom motherboard and an Intel Core processor. While sold under Intel’s own name (an unusual move for the company), NUC was never meant to drive profits. It’s not even a full PC, as it’s missing critical components and lacks an operating system. The goal, instead, was to showcase the efficiency of Core processors by placing them in a shockingly small enclosure.

Such technical demonstrations often whither after they’ve made their point, but Intel has remained committed to the NUC. The pint-sized PC is now on its fourth generation. Its newest incarnation includes not just fifth-generation Core silicon but also a new, even smaller enclosure and support for M.2 solid state drives.

You’d never notice the difference between the NUC and a $500 tower desktop.

Our review unit, distinguished only by its SKU (NUC5i5RYK) is a mid-range model with support for M.2 solid state drives. Base models have a Core i3, and Core i7 models are planned. Some variants also have SATA alongside M.2 to support traditional mechanical drives.

Intel does not sell the NUC directly, so there’s no official MSRP. Currently the handful of online retailers with the Core i5 model listed have it priced around $375, but none have it in stock yet. Still, that price looks accurate, as the Core i3 variants (which are in stock) list around $300. A few hundred dollars seems a bargain for a capable Core powered machine – but are there hidden pitfalls?

The NUC doesn’t make an impression at a glance. Small, squat and dressed in shades of silver and black, the system is easily mistaken for a router or set-top TV box by the untrained eye. It measures about four inches wide and deep and is barely more than an inch thick. A VESA mount, included in the kit, makes it possible to tuck the NUC neatly behind a display.

Pick it up, though, and you may be impressed by its quality. All NUCs have a sturdy metal chassis that feels expensive and helps the system disperse heat. The glossy black lid, which is plastic, cheapens the look a tad and is easily marred by fingerprints or scratches, but its thin construction is not without purpose.

You can pop the lid off easily with a screwdriver, and Intel says alternative lids with expanded functionality will be available later this year. They’ll add features like wireless charging or extra ports. Intel even plans to release a blueprint for 3D printers that will let owners design their own replacement.

Pick the NUC up, and you may be surprised by its quality.

The lid doesn’t provide access to the internals, however. For that users must flip the device over and remove four screws, which also serve as the NUC’s feet. Once loosened, the metal bottom plate can be removed, providing access to the M.2 hard drive slot and the RAM slots. Nothing else is designed to be replaced or removed: the processor itself is soldered into place.

It’s good that the hard drive and RAM can be easily tinkered with, because the NUC is a kit, not a ready-to-run PC. It does not come with or a hard drive and, of course, that means it lacks an operating system as well. Anyone attracted to Intel’s tiny rig must be comfortable with installing hardware after purchase. Anyone with enough dexterity to button a shirt can pop in necessary components in five minutes, but the average user will likely feel intimidated nonetheless.

While small, the NUC manages a respectable selection of ports. Its front includes two USB 3.0, one of which is a charging port, and a headphone jack. Around back users will find two more 3.0 ports, miniature versions of DisplayPort and HDMI, and Ethernet.

Wireless connectivity is great, as the tiny PC boasts 802.11ac Wi-Fi and Bluetooth 4.0. It can also handle Intel Wireless Display, of course. Most inexpensive desktops rely on 802.11n Wi-Fi, if they offer wireless at all.

Putting on a performance

While the NUC can be purchased with a variety of processors, our specific review unit came with the Core i5-5250U, a dual-core chip with Hyper-Threading, a base clock of 1.6GHz and a maximum Turbo Boost of 2.7GHz. It’s a formidable part on paper, and in benchmarks as well.

In GeekBench, the NUC with Core i5 processor is able to outrun the Acer Veriton, which is based on older hardware but still sells today for about $500, and nearly keeps pace with the Alienware Alpha, which is built for games. The NUC also manages to slightly outrun the Dell XPS 13, the only fifth-generation Core notebook we’ve reviewed thus far.

If it’s not obvious, these scores mean there’s nothing about the NUC that feels slow in normal, everyday use. Users can expect to browse the Web, edit photos and manipulate documents just as easily as they would on a typical mid-range notebook. The most remarkable aspect of the NUC’s performance is that it’s unremarkable; you’d never notice the difference between it and a $500 tower desktop. In fact, it may feel quicker, because it’ll usually be equipped with a solid-state drive (and most affordable desktops aren’t).

Speaking of which, we’re skipping our typical hard drive test in this review because the NUC does not come with one as part of its kit; instead we’re heading straight to graphics, where the on-paper specifications continue to impress. Our review unit had Intel’s HD 6000, an upgrade over the HD 5500 solution in the base NUC.

Clearly the NUC is out of its league next to the Alienware and iBuyPower, both of which have discrete graphics inside, but it stacks up well against the Dell XPS 13 and the older Veriton. The Core i5 model is even powerful enough to handle 4K video output via DisplayPort at a full 60Hz. You can’t expect to play games at that resolution, unless they’re extremely old, but the NUC is fine for productivity alongside a monitor.

Even 1080p can be a challenge. Diablo 3 barely exceeded an average of 30 frames per second at low detail, with a minimum of only 24; playable, but only just. At high detail the game was a slideshow, averaging 15 FPS. The NUC is most comfortable playing at 720p, and even then it’s no powerhouse.

Though slim, the NUC is not without a fan. It does have small blower that’s more or less constantly active in the Core i5 model. At idle its noise was difficult to distinguish from the ambient environment of our office, but at full load it emitted up to 37 decibels, which was just barely audible.

Power consumption at idle was remarkable at only six watts, by far the lowest figure we’ve ever seen from a desktop. Most laptops consume at least a couple watts more, though they also have to power a screen. Load consumption was as high as 33 watts, but only in games. Our wattmeter caught the NUC sucking down a modest 18 watts in processor benchmarks. That, again, is less than an average laptop.

The NUC comes with a three-year limited warranty that covers all supplied hardware in the kit. That’s generous given the low price point, but the components provided by Intel aren’t likely to fail. The hard drive and RAM you purchase will be covered by their respective manufacturer warranties.

Our review unit, as mentioned, is currently available for online pre-order at an average price floating around $375. That’s not much, but the NUC does not include the hard drive or RAM. A compatible 128GB drive can be purchased for as little as $70, and 4GB of notebook can be had for around $40. Throw in Windows 8.1 for another $100 and the total price of the NUC is just south of $600. Equipping the system with a larger 256GB drive and 8GB of will push it close to $700.

Take advantage of the NUC’s 4K support with this Editor’s Choice award-winning 27-inch monitor from Dell.

This ultra-slim Bluetooth keyboard compliments the NUC nicely without clogging up its limited USB ports.

Small, comfortable and completely wire-free, the Sculpt is the perfect budget mouse.

The MTS400 offers a blend of performance, storage and affordability that makes it an excellent pick for the NUC.

That’s a better deal than it sounds. An Alienware Alpha is only $499, and it would seem a better deal given its discrete GPU. Yet it’s a much larger system (over twice the NUC’s size), it has a slower processor, and it doesn’t have solid-state storage. Strangely, the Alpha also can’t support 4K, because it lacks DisplayPort or HDMI 2.0.

Most alternatives come up short in some way. Older mini-desktops like the Acer Veriton, Zotac Zbox and Asus Eee Box can compete on price, but often fall short in storage or performance.

The NUC’s toughest competitor is the modern laptop. Systems like the Lenovo Flex 2 and Acer Aspire V3 offer 1080p displays and more RAM at same price point, though they do fall a bit short in performance. Anyone looking at the NUC should certainly consider if a notebook is the better choice. It’s larger, sure, but also far more versatile.

If you want or need a desktop, however, and you don’t mind taking five minutes to install your own hardware, Intel’s NUC kit makes perfect sense. It’s quick, affordable and tiny – and also the least expensive Windows PC we know of that can support a 4K monitor at 60Hz. The NUC isn’t for everyone, but it’s sure to enamor businesses and enthusiasts looking for a simple, quiet, yet surprisingly capable PC.

Topics
This 8K monitor has 3D tech that can be viewed from all angles
Best 2-in-1 laptop deals: Save on Dell, Lenovo, HP and more
All of Samsung’s videos from today’s Galaxy Unpacked event
The Galaxy Book 3 Ultra is Samsung’s most powerful laptop ever
Experts fear ChatGPT will soon be used in devastating cyberattacks
Lenovo’s Surface-style Chromebook just got a big price cut
Save $620 on this Lenovo gaming laptop with an RTX 3070
AMD vs. Intel: which wins in 2023?
Dell is having a big sale on business laptops — up to $2,500 off
Ends soon: sign up for NordVPN today and save up to 62%
New AMD laptop CPU destroys its predecessor, winning by 90%
Lenovo is practically giving away this 2-in-1 Chromebook today
This micro-LED advancement is exactly what AR and VR needs