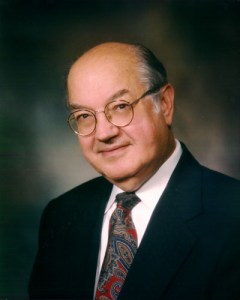 Paul Baran, whose technological innovations helped pave the way to the modern Internet, passed away at his home in Palo Alto, California, Saturday night at the age of 84, The New York Times reports.

In the 1960s, Baran worked for the RAND corporation, where he developed the first “packet switching network,” which works by grouping together data, regardless of type, into information blocks called “packets.” (Baran originally called them “message blocks.”) These packets can then be easily transferred from computer to computer. It is this technology upon which the Internet we all know and love is based.

Baran’s packet switching network concept was so advanced at the time that AT&T refused to adopt his ideas, saying that it was impossible to create. Luckily for us all, the US Department of Defense hired Baran in 1969 to develop ARPANet (Advanced Research Projects Agency Network), which later evolved into the public Internet. Baran’s work with RAND, as well as the US Air Force, would lead to more advanced packet switching technologies, such as TCP/IP and frame relay.

Born on April 29, 1926, Paul Baran began life in Grodno, Poland. He and his parents moved to the Untied States in 1928, and settled in Philadelphia, where Baran grew up.

In 1949, Baran received a bachelor’s degree in electrical engineering  from the Drexel Institute of Technology (now Drexel University). He married his wife, Evelyn Murphy, in 1955, and the couple moved to Los Angeles, where Mr. Baran took a job at Hughes Aircraft as a radar data processing system engineer. Baran later received a master’s degree in engineering from UCLA in 1959.

At the same time as Baran’s ideas were congealing, Donald Davies of the British National Physical Laboratory was also developing similar ideas about packet switching. Both men are credited with playing a part in creating our digital world. And as The New York Times points out, Baran was the first to deliver due credit.

“The process of technological developments is like building a cathedral,” he said in an interview in 1990. “Over the course of several hundred years, new people come along and each lays down a block on top of the old foundations, each saying, ‘I built a cathedral.’

“Next month another block is placed atop the previous one. Then comes along an historian who asks, ‘Well, who built the cathedral?’ Peter added some stones here, and Paul added a few more. If you are not careful you can con yourself into believing that you did the most important part. But the reality is that each contribution has to follow onto previous work. Everything is tied to everything else.”

AT&T becomes ‘un-ISP’ of fiber internet with Hypergig plans
Comcast tests 4Gbps speeds that could ramp up your internet
Start the new year, off right with Gryphon and better internet habits!
The best internet speed tests
Best Apple iMac Deals: Get an Apple desktop for $539
Best Dell XPS Deals: Up to $600 off top-rated laptops
IPVanish Free Trial: Try it for a month, no strings attached
Adobe Free Trial: Try Creative Cloud for free
Why AMD doesn’t need to beat the RTX 4090 to overtake Nvidia
Why the RTX 4080 12GB feels a lot like a rebranded RTX 4070
Microsoft confirms Surface event for October 12, Surface Pro 9 expected
How much does the RTX 4090 cost? RTX 40-series buying guide
Hackers may be hiding in plain sight on your favorite website