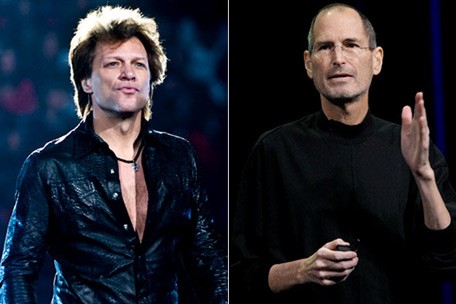 Jon Bon Jovi has a bone to pick with Steve Jobs. According to the rocker, Apple’s CEO is responsible for the state of the music industry – and he doesn’t mean that in a good way. In an interview with the Sunday Times Magazine, Bon Jovi accused Jobs and iTunes of taking away the infatuation with music his generation was privy to.

“Kids today have missed the whole experience of putting the headphones on, turning it up to 10, holding the jacket, closing their eyes and getting lost in an album; and the beauty of taking your allowance money and making a decision based on the jacket, not knowing what the record sounded like, and looking at a couple of still pictures and imagining it.”

While most artists find fault with illegal piracy and the financial toll it’s taking on their industry, Bon Jovi instead seems to think the processed music environment fostered by iTunes has killed discovering music and the effect that has on a person. “God, it was a magical, magical time. I hate to sound like an old man now, but I am, and you mark my words, in a generation from now people are going to say: ‘What happened?’ Steve Jobs is personally responsible for killing the music business.”

He had better get used to it — with iTunes asserting its control over the digital music market, competitors are coming out of the woodwork. Safe the say the online music store is here to stay.

Lawsuit alleges Apple disclosed information about iTunes purchases
Apple to break apart iTunes in MacOS, introduce music, podcasts, and TV apps
YouTube Music is replacing Google Play Music: Here’s where, when, and why
Apple extends PayPal iTunes and App Store support to mobile in 12 countries
Lenovo Legion i7 gaming PCs and laptops both got massive discounts
Lenovo’s ThinkVision ultrawide curved monitor is 40% off today
When is the best time to post on Facebook?
The classic Macintosh was just redesigned by AI — and it’s beautiful
How to use clipboard history in Windows
Best gaming monitor deals for October 2022
How to add external games to your Steam library
Nreal’s Air AR glasses head to the U.S., ready to rock with iPhones
Three ultra-rare RTX 4090 GPUs are hidden in Cyberpunk 2077