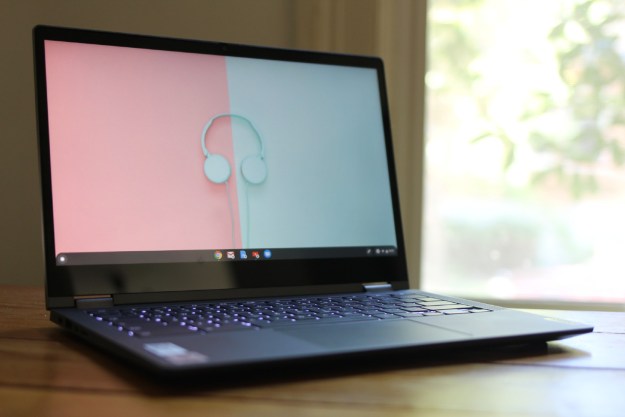 “The Lenovo Chromebook Flex 5 is the best Chromebook you can buy under $500.”

Chromebooks grow more expensive every year. They also grow in quality. Display, performance, and design all improve. They’re a far cry from the cheap Chromebooks of yesteryear.

The Lenovo Flex 5 Chromebook tries to be the best of both worlds. At $410, it captures the original spirit of highly affordable laptops, while still offering an Intel Core processor, a 1080p screen, and a solid look and feel.

Lenovo has struck the balance delicately, but not without a couple of hiccups along the way.

I’m not looking for anything fancy in a sub-$500 laptop. I want modern. I want thin and light. I want solid build quality. And bonus points if it’s not gaudy or plastic-looking.

The Lenovo Chromebook Flex 5 does all that better than most Chromebooks at this price. The “Graphite Grey” color is subtle, first off. Despite being made out of plastic, every surface feels firm and well built. The hinge is tight, resisting being wobbly, even when you tap and swipe on the touch screen.

I do have a couple of small complaints. The bezels are big — especially the chin. The 360-degree hinge adds extra space below the screen. On a laptop this small, it’s hard to miss. Premium Chromebooks like the Samsung Galaxy Chromebook or Asus Chromebook Flip C436 feature those thin bezels we see on Windows laptops, but they are around twice the price. It’s a problem the Dell XPS 13 2-in-1 solves by using a slightly taller screen 16:10 aspect ratio.

Despite the bezels, the Chromebook Flex 5 comes in a portable package. It’s under 3 pounds and 0.7-inches thick, just a bit bigger than a MacBook Air. Options like the Samsung Galaxy Chromebook or Google Pixelbook Go are far smaller — but they’re price tags aren’t.

Most Chromebooks under $500 are bulky 15-inch laptops, which is a shame. The Chromebook Flex 5 fills that void.

The Chromebook Flex 5 features a standard selection of ports, at least for a modern Chromebook. On the right side, you have a USB-C 3.1, USB-A 3.1, headphone jack, and microSD card slot. The other side includes another USB-C port and a Kensington lock. Only the right side can be used for charging the device, unfortunately.

Because it’s a 2-in-1, the Lenovo Chromebook Flex 5 includes a volume rocker and power button next to the ports. The volume rocker is squishy and hard to distinguish, which is a bit frustrating. You’ll use the volume control on the keyboard far more, but that’s no excuse for lousy buttons.

The Flex 5 Chromebook doesn’t have the greatest display in the world. It’s a 13.3-inch IPS LED display with a standard 1,920 x 1,080 resolution. It has a slight green tint to it, which makes pale skin tones look downright sickly.

It only brightens up to 250 nits. That’s bright enough for home use, but if you’re under heavy office lights or sitting next to a window, the glossy screen might cause heavy reflections. A matte screen may have made the screen look cheap, but would have avoided this problem.

I’ve seen far worse on Chromebooks, but options like the Google Pixelbook Go or the Samsung Galaxy Chromebook fare much better. The software on my colorimeter doesn’t work in Chrome OS to measure color precision, but the Flex 5 Chromebook isn’t likely accurate enough for creative professionals. For what a $410 Chromebook is made for, though, the screen does the trick.

The Flex 5 Chromebook has a set of upward-firing speakers, flanking the keyboard on either side. The placement is good, but they’re as tinny as laptop speakers get. The Pixelbook Go is far superior in this category.

The Lenovo Chromebook Flex 5 offers a pleasant typing experience. It’s the typical Chrome OS layout, outside of the oddly shortened left and right arrow keys. But the keycaps are large, the travel is plenty long, and they keypresses are responsive. Lenovo even included backlighting with five levels of brightness control. I felt right at home.

The touchpad is another story. It’s large enough, but it’s subpar in quality. The plastic, textured surface leads to skipping and sloppy tracking. Cheap touchpads like these slow down my workflow, making detailed tasks like text selection cumbersome. The click mechanism is also quite stiff and loud. As my daily driver, the touchpad was the one usability hurdle I tripped over consistently. I’m not shocked given the price, but I was hoping to be surprised. Switching back to a Google Pixelbook Go felt heavenly by comparison.

The Flex 5 Chromebook does include 720p webcam above the screen, which is serviceable for the occasional Zoom call.

Other Chromebooks that use this 10th-gen Core i3 tend to be much more expensive, such as the $800 Asus Chromebook Flip C436. The Flex 5 matches that processor in multi-core scores in Geekbench 5, and it’s 18% faster than the Google Pixelbook Go.

The two cores and four threads it offers might not sound impressive, and neither will 4GB of RAM. But it does feel fast. Chrome OS flies on this hardware, regardless of how many tabs you have open. That’s measured best in a test like Speedometer 2.0 that measures JavaScript performance. In web applications, the Lenovo Chromebook Flex 5 is as fast as a quad-core Core i5 Windows 10 laptop. That’s important, since it’s almost exclusively what you’ll be using this Chromebook for.

You can, of course, run Android apps on the Flex 5. 3D games like the mobile racer Asphalt 9 Legends played smoothly. The integrated graphics can’t even boot up a match of PUBG Mobile, though. As strange as it sounds, your phone will perform better. Many of these Android apps are still not well-optimized for the 16:9 aspect ratio and a cursor. That’s a problem with Android app emulation in Chrome OS in general, though, not the fault of the Flex 5.

There is a downside to a higher-wattage processor. Heat. The Lenovo Chromebook Flex 5 is not a fanless device like the Pixelbook Go. Open up a couple of YouTube videos, Slack, Spotify, and a dozen sites or so — that’s enough to hear the fans spin up and the keyboard to get warm. I never felt that the fans spun up prematurely or too often.

The laptop also comes with 64GB of eMMC storage. It’s not a ton of capacity — nor is it as fast as a solid-state drive. Unfortunately, both have become the standard for Chromebooks. As long as you handle most things in the cloud, 64GB shouldn’t be too big of a problem.

The Lenovo Chromebook Flex 5 delivers decent battery life. It’s always been a strength of Chromebooks, and a deficit of budget laptops. These two qualities meet in the Flex 5, a laptop gets better battery life than most at this price.

On average, it lasted me around six to seven hours of my daily workload. Not quite enough to get through a full workday, but close.

It’s no Pixelbook Go — or even the recent Lenovo Yoga C640 — but it should last you the majority of a workday. In our browsing test, I ran the battery to zero cycling through a selection of websites. The Lenovo Chromebook Flex 5 lasted just under eight hours. It lasted a couple of extra hours longer playing video, where I looped a video clip until it died.

The Lenovo Chromebook Flex 5 is one of the better budget Chromebooks you can buy. It stands out by offering excellent performance, great battery life, and solid build quality. The touchpad isn’t great, nor is the screen. It’s not a laptop without compromises, but this $410 Chromebook is still one of the best laptops you can buy under $500.

The 14-inch Asus Chromebook C425 is worth consideration. It doesn’t have as powerful of a processor, but it’s an impressive-looking design and costs just $443. The Google Pixelbook Go costs a bit more, but it remains my choice for the best Chromebook you can buy.

Lastly, if you’re looking for a similarly-priced Windows laptop, the Acer Swift 3 is a good choice. The $399 model comes with an 8th-gen Intel Core i3 processor, 4GB of RAM, and a 128GB SSD.

The Lenovo Chromebook Flex 5 should last you four or five years. Google extends software updates to older Chromebooks for many years. The warranty is a one-year limited warranty.

Yes. If you’re looking for a laptop under $500, the Lenovo Chromebook Flex 5 is one of the best you can buy.