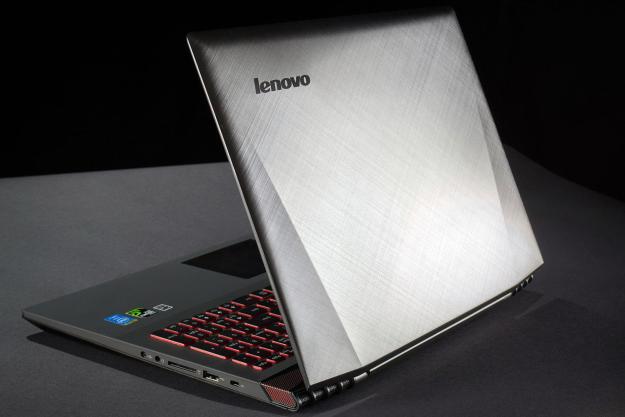 “The Y50p offers a quick processor, and a strong GPU at an affordable price. Unfortunately, everything else is sub-par.”

The phrase “gaming powerhouse” is not typically associated with Lenovo. However, that’s exactly the phrase you’ll find at the top of the Lenovo IdeaPad Y50’s official product page. Clearly, Lenovo wants to be taken seriously by gamers.

On the surface, the Y50’s specifications appear to be capable of backing up the company’s aspirations. All versions of this laptop pair an Intel Core i7-4700HQ processor with an Nvidia GTX 860M graphics chip, alongside a 1TB hybrid hard drive. Base models have 8GB of RAM, but our upgraded review unit arrived with 16GB. There’s also an optional UHD (3840×2160) display on the way but, for the moment, 1080p stands alone.

The MSRP attached to our review unit is $1,249, and the entry-level model with 8GB of RAM starts at just $1,149. That’s reasonable pricing for a gaming laptop, but can you really buy a competent gaming notebook for barely more than a grand?

Lenovo’s Y50, like most gaming laptops, features a 15.6-inch display. This of course means that the system is large relative to a 13-inch Ultrabook, but the Y50’s 24mm profile is among the thinnest in the segment. Only the Razer Blade provides comparable power in a smaller frame.

Affordable and reasonably quick, but it does more to damage the company’s gaming reputation than to enhance it.

Size is the only trait that might make the Y50 stand out, however. In all other respects, it is a typical desktop replacement, and some observers might guess it to be priced lower than where it actually is. A black metal display lid is the system’s only touch of class. Red accents along the keyboard and speakers attempt to add spice, but the dark shade of maroon used here simply blends into the surrounding black plastic.

In short, the Y50 looks a bit boring, but it’s at least well built. Panel gaps are tight, and the chassis doesn’t allow much flex, despite its slim size. The lack of an optical drive, and the system’s light weight, no doubt help contribute to its solid feel.

Connectivity includes three USB ports, two of which are 3.0, along with HDMI, Ethernet, a memory card reader, a combo headphone/microphone jack, and S/PDIF. Bluetooth 4.0 and 802.11ac are included, as well. This is a strong selection, though we’d like to see another video output (like DisplayPort), and additional audio outputs.

The Y50, like many other recent IdeaPads, is equipped with typical island-style keys. They provide reasonable feedback, but not any more than competitors do. We also noted a vague bottoming action that sometimes made us miss keys while touch-typing. A key would feel as if it activated, but no character would appear, introducing extra errors.

We also had issues with the layout, a traditional Lenovo weak point. The included numpad eats into space that would normally be occupied by the right-side shift and backspace keys, both of which are smaller than normal here. Other undersized keys include CTRL, ALT and the arrow keys.

Keyboard backlighting is standard. The LEDs are red, and only red; color customization is not an option as it is on some more expensive gaming systems. Two brightness settings are available, but only the dimmer of the two is useful in a dim room.

The touchpad gave us serious trouble. Our issues centered on manipulating small interface elements, which was difficult because the cursor often failed to stay in place even after we stopped moving our finger. Multi-touch gestures also felt sensitive, and often did not start or stop in the fashion we desired. Anyone looking to buy a Y50 should plan to use a mouse.

We knew the Y50’s screen would be a problem the moment we laid eyes on it. Everything about it except its matte coat reminds us of the bad-old-days of terrible laptop displays. Viewing angles are tight, perceived contrast is low, and fine detail, be it in images or fonts, lacks the crisp look you’d expect from a 1080p display.

These readings result in a poor gaming experience. Colorful games are sapped of life, while dark games lack contrast and shadow detail. At times, the screen’s black level performance is so poor that necessary detail is lost. For instance, at one point in Battlefield 4, we had trouble figuring out how to move forward because a dim, shadowy doorway was indistinguishable from the wall surrounding it.

Audio performance is a different story. Maximum volume is very loud, the mid-range is crisp, and some bass can be felt through the Y50’s slim frame. Overall performance can beat some larger, more expensive gaming rigs like the Origin EON17-S.

Intel’s Core i7-4700HQ is one of the company’s least powerful mobile quad core CPUs, featuring a 2.4 GHz base clock, and a 3.4 GHz Turbo Boost maximum. This is still enough to provide strong performance, however, though how strong it is depends on your perspective.

As you can see, the Y50 is much faster than the dual-core Dell Inspiron 15 7000 Series, but also much slower than the MSI GT60 Dominator Pro or Clevo P157SM. In short, Lenovo’s gaming system isn’t the quickest, but it is still a major step up from a typical desktop replacement or Ultrabook.

7-Zip, which is more heavily reliant on multi-threaded performance, helped the Y50 reach a score of 18,790. This is better than the Clevo P157SM’s score of 18,557 and the MSI GT60 Dominator Pro’s score of 18,690. Realistically, these scores are so close that they can be considered a tie, but the results show that the Y50’s performance will depend on the application you throw at it.

The weak link in the Lenovo’s performance is its hard drive. The Y50 uses a large mechanical drive paired with solid state cache in an attempt to provide the best of both worlds, but PCMark 8’s storage test reached a score of just 2,123. While this doesn’t impact in-game framerates noticeably, it does contribute to long load times.

We hoped the Y50’s portable dimensions and modest 5.3 pounds of heft were indications that it could serve as a road warrior. Alas, that’s far from true. The Peacekeeper Web browsing benchmark drained a full charge in just three hours and three minutes, which puts the Y50’s endurance an hour behind the MSI GT60 Dominator Pro, and 50 minutes south of the Clevo P157SM.

Power draw is part of the problem. We measured up to 31 watts of consumption at idle, which is higher than the Clevo P157SM’s 28 watts. At full load, the Lenovo takes the lead, drawing only 87 watts to the Clevo’s 157 watts, but any benefit this might have provided is marginalized by the Y50’s smaller battery.

Cramming a powerful GPU into a thin system leads to drawbacks aside from lower battery life. Heat is also an issue. We recorded a maximum external temperature of 100 degrees Fahrenheit at idle, a figure that rose to a toasty 106 degrees at load, which can make the Y50 a bit uncomfortable to use on your lap. Thicker systems like the Clevo P157SM, MSI GT60 and Origin EON17-S are cooler at full load than the Lenovo is at idle.

The high temperatures might be blamed on the fan, which isn’t as aggressive as the competition’s. Noise levels hover around 38 decibels at idle, and rise no higher than 47dB at load. That’s a decibel less than the Clevo, and 12 decibels less than the MSI GT60 Dominator Pro.

Lenovo’s Y50 is affordable and reasonably quick, but it does more to damage the company’s gaming reputation than to enhance it. The system’s unforgivable flaw is the display, which would be disappointing on a system sold at half the price. A low-contrast panel with poor viewing angles has no business being part of a gaming laptop. Lenovo’s optional Ultra HD panel might be better, but it will cause another problem; the Y50’s GTX 860M graphics chip isn’t quick enough to handle games beyond 1080p.

There are other issues, as well. The touchpad is finicky, the keyboard is frustrating, and the battery gives out far too quickly. Ultimately, though, these are just nitpicks compared to the display, which disqualifies the Y50 from a recommendation by itself.

And that’s a shame, because the hardware inside is solid. The Y50 achieved at least 30 FPS at maximum detail in the three games we tested, which is no small feat for a gaming laptop that costs barely more than $1,000. This notebook could be a reasonable choice for gamers on a tight budget who are willing to make sacrifices at the altar of framerate, but it’s not the well-rounded, portable powerhouse it could have been.

Best gaming laptop deals for September 2022
Best laptop deals: Get a portable workhorse from $119 today
The best keyboards for 2022
The best wireless keyboards for 2022
Best Apple iMac Deals: Get an Apple desktop for $539
Best Dell XPS Deals: Up to $600 off top-rated laptops
IPVanish Free Trial: Try it for a month, no strings attached
Adobe Free Trial: Try Creative Cloud for free
Why AMD doesn’t need to beat the RTX 4090 to overtake Nvidia
Why the RTX 4080 12GB feels a lot like a rebranded RTX 4070
Microsoft confirms Surface event for October 12, Surface Pro 9 expected
How much does the RTX 4090 cost? RTX 40-series buying guide
Hackers may be hiding in plain sight on your favorite website