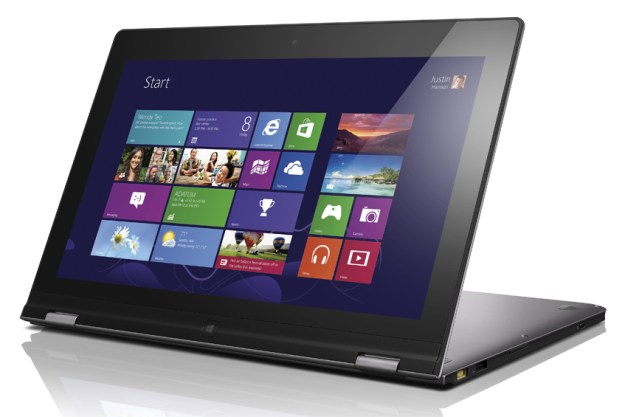 “Though we wish it had more ports and the keyboard didn't have those minor frustrations, overall, we have no trouble recommending this Ultrabook.”

When Lenovo first introduced the IdeaPad Yoga 13 at CES last January, the innovative hinge design made this Ultrabook the belle of the ball. Designed for Windows 8, this device literally bent over backwards to accommodate all of the operating system’s features.

Nearly 10 months later, the Yoga is still one of the most coveted Windows 8 devices. Other companies have given us their own take on the hybrid laptop/tablet, including the ASUS Vivo Tab RT, and the Microsoft Surface (to some extent). While those prioritize the tablet aspect, the Yoga is a laptop-first kind of machine.

Starting at $999, the Yoga is right in line with other Ultrabooks and even offers more than most of its competitors at this price point. But are the Yoga’s extra features just window dressing, or is it truly a marvel of innovation?

At first glance, the Yoga looks like any other IdeaPad that’s come out in the past few years. Like the IdeaPad U Series, it has the same flat edges, slightly rounded corners, island-style keyboard, and large clickpad.

Overall, the IdeaPad design is a good one, especially if you like a minimalist aesthetic. The soft-touch coating on the lid and the deck make the Yoga comfortable to hold no matter which position you choose. Plus, the build feels very solid, which is important for a laptop meant to be manhandled all the time.

Even though the Yoga is technically an Ultrabook, the small selection of ports is disappointing. You only get two USB ports (3.0 and 2.0), a full-size HDMI, and a full-size SD/MMC card slot. At least the USB 3.0 port allows for multiple peripheral hookups and fast speeds. Aside from these ports, you’ll also find the power button, volume rocker, and orientation lock buttons along the edge of the device so they’re accessible in any mode.

Clickpads on PCs usually spell trouble, but the Yoga’s works smoothly and performs the way you’d expect. However, with a touchscreen at your disposal, you might find yourself using the clickpad less than normal.

The standard IdeaPad keyboard offers decent travel yet lacks the strong tactile feedback we see on business laptops from Lenovo. We don’t like that the Backspace and Shift keys are smaller than normal to make room for less consequential keys like Home, End, and the arrow keys on the right. This made for a lot of typing mistakes in the first few hours of using the laptop.

At 3.4 pounds, the weight is good for a 13-inch Ultrabook, and the 13.1 x 8.9 x 0.67-inch size makes it a slim machine. While these dimensions are just fine for a laptop, they make for an unwieldy tablet.

Of all the convertible laptop/tablets coming with the Windows 8 wave, the Yoga offers a distinct take on the conversion process. The display doesn’t detach from the keyboard base or slide to hide it. Instead, it bends all the way around thanks to a versatile hinge design. The hinge itself offers just enough resistance to keep the screen in place wherever you put it and doesn’t make the process of bending it too difficult. In some modes, using the touchscreen does cause some bounce when you tap, though not when typing.

There are four main positions: laptop mode, tablet mode, tent mode, and stand mode. Let’s take a look at them …

No change here from any other laptop, though with the Yoga you can position the display at any angle you like, even completely flat, and the keyboard and touchpad will still work. Since viewing angles are wide, you have a lot of versatility here.

Fold the display all the way around with the lid and bottom of the Yoga touching and you have tablet mode. A 13-inch screen doesn’t make for the most comfortable tablet experience, even without a keyboard still attached. Because of the device’s large size, most users will probably find playing accelerometer-heavy games like Temple Run uncomfortable or unnecessary.

Once the hinge detects that you’ve gone beyond the 180-degree mark, it automatically shuts off the keyboard and touchpad. This is a great idea in theory, but, in practice, the exposed keyboard presents a problem beyond accidental presses. During testing, we knocked one of the keys out of joint because the Yoga was in our lap, not on a hard surface where the keys don’t touch. We hadn’t done anything strenuous, but upon inspection, it looks like the keys are easily prone to this due to their design. The solution would be to make sure you have a hard surface at hand and to always carry the Yoga in closed laptop mode, not tablet mode.

In yoga parlance, this mode would correspond to the downward-facing dog position. Again, because the hinge has a good amount of resistance, we were able to prop it up at both obtuse and acute angles and always felt confident the Yoga would stay in place. This mode is good for watching movies or hanging on an available (and sturdy) edge, like the back of a chair.

Sticking with the yoga poses, this mode (sort of) resembles the cobra, and is another that many users will use when watching videos. The keys on the deck are recessed just enough that sitting the Yoga on a flat surface won’t disturb them. Plus, the soft coating on the deck will keep the device from sliding around. The speakers at the hinge are audible in any mode. However, in the stand mode, they point toward the viewer, giving you better volume and a little more clarity. While the speakers don’t offer the pinnacle of audiophile-grade quality, they are loud and don’t distort sound at high volumes.

No matter which mode you use the Yoga in or from what angle you view it, the 13.3-inch IPS display is a pleasure to work with and to view. Shipping this Ultrabook with a 1600 x 900 pixel panel, Lenovo didn’t skimp on resolution. The display is a great showcase for the colorful Windows 8 interface since the colors are bright and rich. Blacks are appropriately deep as well.

The screen features 10-point multi-touch that we found very responsive. Though there are some elements of Windows 8 that aren’t as touch-friendly as others – e.g., any time you enter Desktop mode instead of dealing with an app made for the Modern (née Metro) UI – we were able to tap even tiny elements and icons since the touch detection is so precise. Swiping from the edges to call up the Windows 8 Charms and menus worked every time. And though this did mean the screen got somewhat smudged, all the tapping didn’t result in a ton of fingerprints.

In tablet mode, the accelerometer also responded well. There aren’t many games that take advantage of it yet, but when we switched modes or just orientations, the screen followed suit in good time.

You’ll find pretty standard Ultrabook fare inside the Yoga. Our review unit came with a 1.7-GHz Intel Core i5-3317U processor, 4GB of RAM, a 128GB solid state drive, and Intel HD Graphics 4000. This is the configuration sold at Best Buy for $999. Other configurations are available in Lenovo’s online store starting at the same price but with a choice of Core i3, i5, and i7 CPUs, and up to 8GB of RAM.

Windows 8 doesn’t seem to have a detrimental effect on performance, even with the inclusion of a touchscreen and accelerometer. The Yoga benchmarks about the same as other Ultrabooks with this CPU. It scored 4,131 on PCMark 7, just above the HP Envy 4.

In our hands-on testing, the machine was able to handle moderate multitasking with multiple tabs open in Chrome and Firefox while also switching between other apps and games. It’s no surprise that this processor can handle most basic tasks.

Don’t expect to fire up your favorite MMORPG on this guy. You won’t be able to play much more than casual games on this system thanks to Intel’s integrated graphics. The Yoga scored 3,542 in 3DMark 06 – decent for a laptop with this graphics card and RAM, but not amazing. The lightweight games we tested, such as Fruit Ninja and Agent P Strikes Back, ran well.

The 4-cell battery is typically not accessible to users. It lasted 3 hours and 2 minutes on the Battery Eater test. Video playback lasted 5 hours and 48 minutes. In normal usage, including Web surfing, game playing, and video streaming, we were able to get between 6 and 7 hours on average, and that’s without any battery saving measures. The Yoga has the potential to last all day, especially as it sips power judiciously when in sleep mode

The Yoga didn’t get very hot during testing, even in tablet mode. It’s cool enough to keep on a lap or hold in your arms even when performing intensive tasks. However, when we stressed the system more and the fan kicked on, the noise proved distracting in a quiet room, especially when it got fast enough to whine a bit.

The Lenovo IdeaPad Yoga is a good Ultrabook for the price, even without some of the fancier features. The design, display, and performance are enough to capture our attention. But the touchscreen and versatile convertibility put it over the top. The Yoga showcases everything that Windows 8 has to offer. Plus, the $999 price feels like a bargain when you take all the features and specs into consideration. Though we wish it had more ports and the keyboard didn’t have those minor frustrations, overall, we have no trouble recommending this Ultrabook.