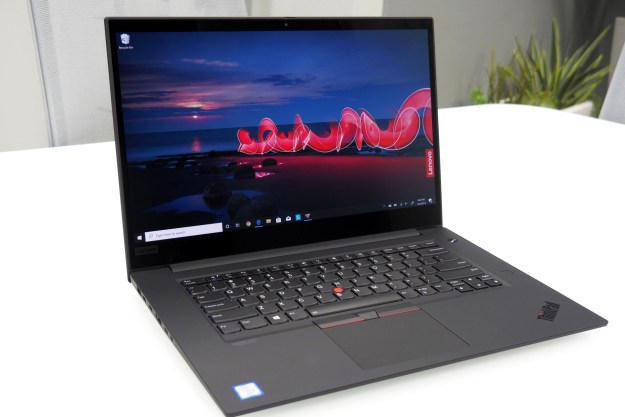 “The ThinkPad X1 Extreme Gen 2 is a sturdy but sleek laptop that can work hard, and play hard.”

ThinkPads are the pickup trucks of the laptop world. They can take a beating, welcome tinkering, and always get the job done.

That made the original Lenovo ThinkPad X1 Extreme a little like the Ford F150 Raptor. It was a ThinkPad, yes, but one with the silicon equivalent of a twin-turbo V6 mashed inside the hood. The ThinkPad X1 Extreme Gen 2 doubles down on that proposition with even faster and more extravagant components. With an eight-core processor, 32GB of RAM, and a 4K OLED screen, this is as impressive a spec sheet as you’ll find and makes an argument for one of the best laptops available.

The $4,719 price (on sale for $2,831) targets creative professionals who are willing to pay for power, but is it worth their hard-earned cash?

The ThinkPad look, with no regrets

Lenovo didn’t mess with the X1 Extreme’s classic ThinkPad design in this version. It’s basically the same chassis as the previous model, only a tiny bit thinner at 0.7 inches compared to 0.74 inches. It’s relatively light, as well, at 3.76 pounds. This is similar to the Dell XPS 15, the ThinkPad’s most natural competitor, which is almost exactly the same size (in spite of having thinner bezels), and a bit thinner at 0.66 inches. However, the Dell is almost a pound heavier at 4.5 pounds.

The X1 Extreme Gen 2 looks a lot like any other ThinkPad, with only a few small embellishments that tend to exemplify the X1 brand. It’s black with red accents, including the usual red LED that dots the “i” in the ThinkPad logo on the lid, and the stylized X1 logo in the opposite corner.

Configurations with a 4K UHD option have a carbon-fiber weave on the lid, and the X1 Extreme Gen 2 is a little more streamlined than the usual boxy ThinkPad. But all in all, you won’t mistake this for any other laptop brand.

Build quality is superb, as well, thanks to carbon fiber up top and aluminum in the chassis bottom, and the X1 Extreme Gen 2 has the same soft-touch coating on the keyboard deck that’s so comfortable for long typing sessions.

The chassis bottom pops off and provides access to several components.

The design also makes for great thermals that maintain excellent performance (more on that in a bit). And, in a nod to ThinkPad enthusiasts who might not be happy with the stock parts, the chassis bottom pops off and provides access to several components including the RAM, the Wi-Fi card, and the two (yes, two!) NVMe SSD slots.

The same extends to the keyboard, which offers the same sculpted keys, deep travel, and clicky mechanism that makes the ThinkPad keyboard one of the best around.

The red TrackPoint nubbin is right there in the middle of the keyboard with the extra set of buttons stealing some space from the touchpad, which still manages to be large and precise with its Microsoft Precision touchpad drivers. The AMOLED display is touch-enabled, and in fact, it’s the display to choose if you want a touchscreen.

Nope — this one runs an 8-core, 16-thread Intel 9th-gen Core i9-9880H. That’s not quite the fastest chip you can get in a laptop today — the Core i9-9980HK in the Dell XPS 15 and Apple MacBook Pro 16 has a higher frequency — but the Extreme is much faster than typical ThinkPad fare.

Looking at the Geekbench 4 synthetic benchmark, the X1 Extreme Gen 2 was slower than the Dell and the Apple as expected, but not by much.

When we ran our real-world Handbrake test that converts a 420MB video to H.265, the ThinkPad was even more competitive. There’s a caveat, though: Lenovo has leveraged the Windows 10 power slider to implement its Intelligent Cooling feature. Move the slider all the way to the right, and you’ll kick off the Performance setting that maximizes processor performance (and ramps up the fans).

In standard mode, the X1 Extreme Gen 2 took almost three minutes to complete the Handbrake test, which is slow compared to the competition. The Dell XPS 15 took 102 seconds, and the Apple MacBook Pro 16 took 115 seconds.

In Performance mode, though, the ThinkPad caught up, taking just 118 seconds (almost a full minute less than in standard mode). Keeping up with the faster CPUs in the Dell and the Apple is a testament to how well Lenovo tuned the laptop’s thermals to make sure the CPU can maintain its performance, and if you’re running very demanding creative apps like video or photo editing then you’ll want to make sure Performance mode is turned on. You’ll notice the fans more, and there will be more heat generated than in standard mode, which is very quiet and cool for a high-performance laptop.

The X1 Extreme Gen 2 uses an Nvidia GeForce GTX 1650 Max-Q GPU, which puts it in close competition with many other 15-inch laptops such as the Dell XPS 15 and Lenovo’s own Yoga C940 15. It also bucks the ThinkPad trend, giving The X1 Extreme Gen 2 the chops to run modern games at 1080p and decent graphics.

In all of our gaming tests, the ThinkPad was neck and neck with its legitimate competition. It managed 65 frames per second (FPS) Fortnite at 1080p and high graphical detail, and 51 FPS with epic graphics. The XPS 15 with its GTX 1650 was just a couple of frames faster at 67 FPS at 1080p and high graphics and matched the ThinkPad at 51 FPS at epic. The Yoga C940 15, also running a GTX 1650 Max-Q, was a few frames per second less. The same relative performance held in Assassin’s Creed Odyssey and Civilization VI, where the X1 Extreme Gen 2 did quite well.

The bottom line is that Lenovo has indeed produced a ThinkPad in the X1 Extreme Gen 2 that’s as competent a gamer as the best 15-inch mainstream laptops. That’s a first for the line, and it proves the point that Lenovo is aiming for a different group than the typical ThinkPad buyer — and that’s a good thing.

No mention yet of that gorgeous AMOLED display?

One area where Lenovo hasn’t skimped on with the ThinkPad line, in general, is in its choice of displays. You can choose a stodgy old Full HD (1,920 x 1,080) display if you want, and Lenovo will give you a nice one with 500 nits of brightness and support for Dolby Vision high dynamic range (HDR) —  there’s also a more mundane 300 nit, non-HDR display available. Then, you can choose a 4K UHD (3,840 x 2,160) IPS display that also offers 500 nits of brightness and Dolby Vision HDR.

But you don’t want those displays, trust me. You want the one that equipped my review unit, the 4K UHD AMOLED display promising, you guessed it, 500 nits of brightness and Dolby Vision HDR. Those are the same specs as the lesser displays, but don’t let that fool you. This is a beautiful display.

If you’re a creative professional, you’ll love the X1 Extreme Gen 2’s performance in your most demanding creative apps. And then you’ll love this display, thanks to its wide range of colors (100 percent of sRGB and 97 percent of Adobe RGB), its high brightness (401 nits by my colorimeter, less than advertised), incredible contrast of 401,870:1, and good accuracy of 1.55 (1.0 and less is excellent). It should come as no surprise that these are similar results to the Dell XPS 15 and HP Spectre x360 15 equipped with the same display, and much better than any IPS display available on a laptop.

And in my more subjective testing — that is, firing up the most challenging Netflix 4K HDR content I know — the display was the best I’ve used yet. Some of the AMOLED displays I’ve used struggle with Netflix HDR, being unable to process the signal properly and making darker scenes very hard to see. That’s not true with the Lenovo thanks to the Dolby Vision HDR support that’s baked in. Some of the same scenes in Altered Carbon that were too dark in HDR mode on the HP Spectre x360 13, for example, are perfectly lit on the X1 Extreme Gen 2.

Weirdly enough, that makes a ThinkPad the best Netflix binging laptop I’ve used. And a clamshell, to boot. The HP Spectre x360 15 is close, but you have to turn HDR off to get close to the same experience. And Lenovo even improved the audio quality since the last version, or my ears are different. We didn’t find the audio in the first version to be all that impressive, but I found the Gen 2’s audio to be just fine for watching Netflix — plenty of volume, decent highs and mids, and even a hint of bass from the two downward-firing speakers on the chassis bottom.

But darn it, battery life is a disappointment

In general, I’ve found ThinkPads provide disappointing battery life compared to other premium laptops, and the X1 Extreme Gen 2 is no different. My review model is particularly challenged, with 80 watt-hours of battery life (the HP Spectre x360 15 has 84 watt-hours and the Dell XPS 15 has 97 watt-hours), some power-hungry components, and a display that sucks a lot of juice when it’s displaying anything other than darker content.

In our web browsing test that gives the best idea of typical productivity battery life, the ThinkPad barely managed five hours. The Dell XPS 15 AMOLED went for 7.5 hours and the HP Spectre x360 15 AMOLED lasted for almost 8.5 hours (albeit with a slower U-series CPU). The X1 Extreme Gen 2 didn’t do much better looping our test Avengers trailer, at six hours — the XPS 15 exceeded eight hours and the Spectre x360 15 was much strong at 11 hours. Finally, when running our most CPU-demanding Basemark test, the ThinkPad lasted for three hours, which the Dell matched and the HP exceeded by 90 minutes.

Seriously, that’s not great battery life, and it’s all down to the AMOLED display. You’ll get hours longer even with a standard 4K IPS display, not to mention a Full HD display. Note that our tests use a lot of bright screens, which use more power with AMOLED displays. Turning on dark mode can help with battery life, but nothing you do will get the X1 Extreme Gen 2 to last anything near a full workday away from a plug.

The ThinkPad X1 Extreme Gen 2 is the most powerful ThinkPad ever, building in some powerful components while avoiding any sacrifices that would turn off the typical ThinkPad fan. That makes it a great laptop for any PC enthusiast or creative professional who demands the best performance. The AMOLED display is one of the best you’ll find in a 15.6-inch laptop, but battery life really suffers. Keep that in mind when you’re selecting your display.

The ThinkPad’s most natural competitor is the Dell XPS 15, which can be configured with an even faster Core i9 and the same AMOLED panel. The Dell is also less expensive, at $2,580 for roughly the same components — including the more powerful Core i9-9980HK CPU. The HP Envy 15 and Dell XPS 15 are almost similar when it comes to decent alternatives.

The HP Spectre x360 15 is also a very powerful 2-in-1 alternative, although you’re limited to a 45-watt Core i7 as the fastest CPU option and 16GB as the maximum RAM. It’s quite a bit less expensive, though, at $2,020 on sale, and its AMOLED display and media mode make it a slightly more comfortable Netflix binging machine.

The ThinkPad X1 Extreme Gen 2 feels like it will last forever, and it has the components to match. The one-year warranty is industry-standard and disappointing at this price point.

Yes, even if you’re not a ThinkPad fan. The ThinkPad X1 Extreme Gen 2 is fast, incredibly well-built, and has a beautiful AMOLED display option that will please both creative professionals and media addicts. Just make sure you carry your charger with you if you’re going to be away from the office for more than half a day.

We’ve compiled the best laptop deals if you’re looking for other brands and more affordable options.