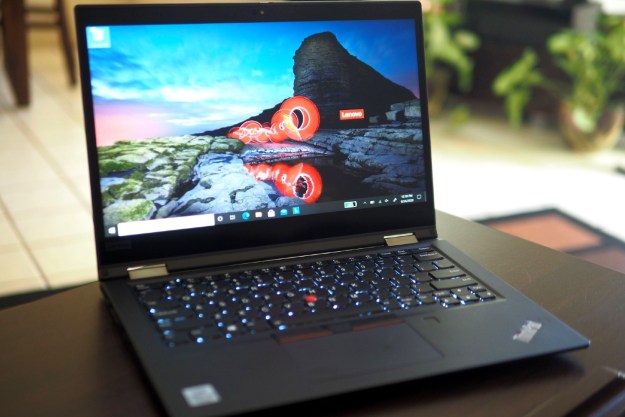 “The ThinkPad X13 isn't small, fast, or long-lasting enough to compete with its toughest rivals.”

The traditional ThinkPad uses a 14-inch screen. But with the trend moving toward thinner bezels and smaller laptops, Lenovo has begun to trim some fat off the old ThinkPad design.

That’s what the ThinkPad X390 Yoga was aimed at doing, and now Lenovo has launched its replacement, the ThinkPad X13 Yoga. It keeps the basic form factor of that laptop while updating the internals.

The ThinkPad X13 looks identical to its predecessor, and the materials used in the chassis remain the same as well. Like the X390 before it, the ThinkPad X13 is completely made up of a mixture of carbon fiber, nylon fiber, and glass fiber, which is intended to be both light and durable. During my review, I found that the lid bends a little too much, there’s some keyboard flex, and even the bottom of the chassis gives a bit under pressure. It’s not the most robust-feeling ThinkPad I’ve ever used, which has always been a hallmark of the brand.

If you’re a fan of the ThinkPad look, then you’ll be a happy camper.

Lenovo says it has subjected the X13 to its usual extreme ritual of military-grade certifications and torture tests, and assures us that it’s “one of the toughest in its class.” As far as 13-inch laptops go, the HP Spectre x360 13 and Dell XPS 13 both feel more solid, and when considering other business-class laptops like the Dell Lattitude 7400 2-in-1, I’m not too certain the X13 lives up to Lenovo’s claims. The keyboard is spill-resistant, though, which is a plus and not very common.

Consider the Spectre x360 13 and XPS 13 again — both are minuscule compared to the X13 thanks to much smaller bezels, coming in at almost an inch smaller in each dimension. While the X13 might be the smallest ThinkPad, it has relatively large bezels on top and bottom that give it quite a bit of extra size compared to what’s becoming the new normal.

Aesthetically, the X13 is a ThinkPad through and through. It’s all-black, has the usual ThinkPad logo in the corner of the lid with the red LED battery indicator over the “i,” the obligatory red TrackPoint nubbin in the middle of the keyboard, and red accents on the TrackPoint buttons. That’s it for bling, and it remains a good look that’s both attractive in its own right and ties almost the entire ThinkPad line together. If you’re a fan of the look, then you’ll be a happy camper.

Connectivity is excellent for such a thin and light laptop. You get two USB-C 3.1 ports (one with Thunderbolt 3 support), two USB-A 3.1 ports, a full-size HDMI 1.4 connection, an Ethernet extension connector (that needs a dongle, of course), and a microSD card reader. Wireless connectivity is up to date with Wi-Fi 6 and Bluetooth 5.0.

In a nod to its business clients, Lenovo equips the ThinkPad X13 with Intel vPro processors that enable plugging into corporate systems for enhanced security, manageability, and stability. My review unit came with the 10th-gen quad-core Core i5-10310U vPro inside, which proved to be a competent but unspectacular performer.

In our Handbrake test that converts a 420MB video to H.265, the X13 took almost five and a half minutes to finish. The Aspire 5 finished 15 seconds faster, and the X13 was a full 40 seconds slower than the Inspiron 14 5000. The Acer Spin 3 with the same Core i5 was over a minute faster. Once again, the X13 was at the bottom of the heap of similarly equipped laptops.

That’s not to say that the X13 is a slow laptop. It’s not — it’s more than fast enough for productivity tasks and media consumption. But it’s not as fast as its non-vPro competition, meaning that you’re paying for the enhanced corporate support more than you are for extra performance.

The X13 also has the basic Intel UHD graphics, meaning that it’s not a gaming machine by any stretch of the imagination. You’ll want to stick to older titles at lower resolutions and graphical detail if you want to game at all or play casual Windows 10 games.

My review unit came equipped with a 300-nit (rated) Full HD (1,920 x ,080) IPS display, and according to my colorimeter, it’s almost average for premium displays today. As I’ve mentioned before, that’s a good thing, because today’s average display is exceptional for productivity work and multimedia consumption. Only creative professionals who need extremely wide and accurate colors will be disappointed with most premium displays.

Brightness was a little low at 274 nits (we like to see premium displays at 300 nits or more), and contrast came in at 860:1 (1,000:1 or more marks a higher-quality display). Neither are terrible scores, but they’re a bit below average. You’ll struggle a bit in bright environments, and black text on white backgrounds won’t pop quite as much, which is important to me as a writer.

Note that we didn’t test the Full HD displays on the HP Spectre x360 13. Rather, we tested the HP with an AMOLED display that was very bright with incredible contrast. Our Dell review unit was Full HD, though, albeit in a 16:10 aspect ratio, and it was also very bright and had a much higher contrast.

I had no problems using the laptop screen during my review, which typically includes writing most of the copy on the review unit. I also watched some Netflix and found the experience pleasant enough. This is a good display but not a great one, although Lenovo does offer a couple of other, brighter displays as upgrades that might provide better overall performance. The high-end display offers Lenovo’s Privacy Guard feature that can render the display illegible from the sides.

The display has Lenovo’s ThinkShutter that slides over to block the webcam physically, but that’s no longer a unique feature. The Spectre x360 13, for example, has an electronic version that removes the webcam from the system.

Audio was surprisingly good, with enough volume and no distortion at full blast. There’s little bass, which is normal on all but Apple’s MacBooks, but mids and highs were clear and bright. The two downward-firing, Dolby-tuned speakers are good enough for watching Netflix alone, but of course, for the best audio quality, you’ll want a good set of headphones or a solid Bluetooth speaker.

The ThinkPad keyboard is another iconic feature of the line and has long been one of the best around. The X13 has the standard version, and it provides the usual large keys, generous spacing, and a consistent and controlled mechanism that’s very precise. It does have a bit of firmness to it, though, requiring a bit more pressure to activate a keystroke than some other keyboards.

I like a lighter feel, and so I prefer the recent MacBook Magic Keyboard, as well as HP’s Spectre (and, recently, Envy) keyboard on the Windows 10 side. If you like a lot of pressure, though, or are just a fan of the ThinkPad keyboard in general, then you’ll love the X13’s.

The touchpad is a bit smaller than it could be due to the buttons up top that service the TrackPoint nubbin. Microsoft’s Precision Touchpad drivers are on hand, making the touchpad responsive and providing excellent support for Windows 10 multitouch gestures. The TrackPoint is there as well for those who prefer it, and it works as smoothly as always.

The display is touch-enabled and precise. No complaints there. And it supports the Lenovo ThinkPad Pen Pro with 2,048 levels of pressure sensitivity (other laptops like Microsoft’s Surface line and the Spectre x360 support 4,096 levels). The Pen Pro slides into a port on the side of the X13 that not only provides a convenient storage place but also serves as a charger. The biggest drawback of the Pen Pro is its size — it’s smaller than a “real” pen and doesn’t feel as natural for writing and drawing. Lacking a spring mechanism, the pen can’t be removed from the slot while on a flat surface either.

Windows 10 Hello password-less login support is provided on my review unit by a fast and responsive fingerprint reader with the extra security of storing all fingerprint information on a chip. The other display options add in an infrared camera for facial recognition.

The X13 has 50 watt-hours of battery life, which isn’t as much as some (the Spectre x360 13 has 60 watt-hours, for example), but isn’t terrible for a 13-inch laptop with a Full HD display. I’d expect decent if not very good battery life.

That’s not what I got. In fact, battery life was downright disappointing.

Starting with our most demanding Basemark web benchmark test, which stresses the CPU and GPU, the X13 managed just over three hours. That’s well under average but not a terrible score. The Dell XPS 13 managed almost five hours, while the Spectre x360 13 with its power-hungry AMOLED display was close to four hours.

Its battery life was downright disappointing.

Next, in our web browsing test that best mimics productivity longevity, the X13 petered out in just under six hours. That’s a poor score. The XPS 13 went for almost 12 hours, while the Spectre x360 13 almost matched the X13 despite its display. Finally, in our video test that loops a local Full HD Avengers trailer, the X13 couldn’t quite make it to eight hours. The XPS 13 managed 14.5 hours and the Spectre x360 lasted for roughly 10 hours.

In short, the X13’s battery life is hard to figure out. It should last longer, but it doesn’t. You might make it through a full day’s work of very light productivity tasks, but chances are you’ll need to carry your charger with you.

The ThinkPad X13 is the smallest ThinkPad you can buy, and that’s about all it has going for it. If you’re looking for a ThinkPad that won’t weigh you down or take up much space in your backpack, then it’s your best option. But its performance, build quality, battery life, and display fall behind the competition. It’s also relatively expensive at $1,275, on sale from a retail price of $2,126.

The HP Spectre x360 13 is a solid choice if you’re sold on a 2-in-1. It’s better-looking, just as solidly built if not more so, offers a spectacular display option, and if you go with a low-power display, you’ll get incredible battery life that puts the X13 to shame. It’s also $1,200 with a Core i7 CPU and a 512GB SSD, making it a less expensive choice as well.

If you’re not sold on a 2-in-1, then the Dell XPS 13 is a great alternative. It’s also better-looking, solidly built, offers better performance, and has much better battery life. And you’ll save about $175 for the same configuration as the X13.

If you need the extra security and manageability features of vPro, the HP Elite Dragonfly is a more modern and feature-packed commercial laptop.

The ThinkPad X13 is built well enough to last you as long as you’ll possibly need the laptop, and its components — Thunderbolt 3 and Wi-Fi 6 in particular — are up to date and will keep you connected for years. The one-year warranty is disappointing, especially for a business-class machine.

No. The ThinkPad X13 doesn’t have a lot going for it unless you’re a die-hard ThinkPad fan.