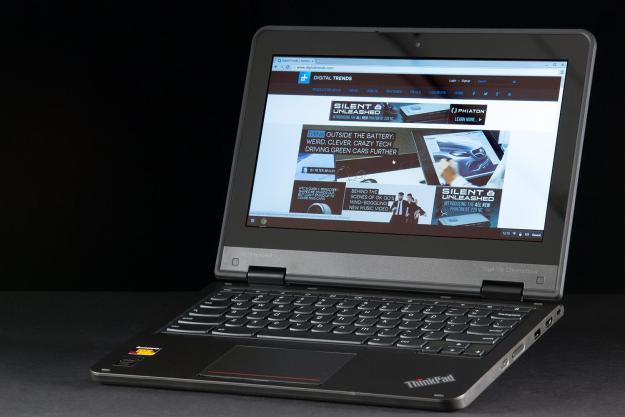 “The Yoga 11e feels like a love letter to touch typists, but it falls too far short in other areas.”

Anything with the ThinkPad brand on it means that it should be built to handle business use. Yoga means it has a 360 degree hinge, and that it can be converted into a tablet. 11e means it has an 11.6 inch display that focuses on efficiency, and Chromebook means it’s a Chromebook! At least everything in the name has a purpose.

This is an extremely sturdy laptop.

While most systems running Chrome OS are content to fit within the boundaries of a cheap-and-cheerful 11 to 14 inch shell, Lenovo is aiming for something greater here. The ThinkPad Yoga 11e Chromebook, which we’ll just call the Yoga 11e from here on out, is built for people who see cloud computing as the way of the future, and believe Windows has outlived its usefulness.

Its pricing reflects this. You can expect to pay somewhere around $360 for a model that’s equipped like our review unit. This system boasts a quad-core Intel Celeron N2930 CPU clocked at 1.83GHz, 4GB of RAM, and a 1,366 x 768 display. The top-tier model, which sports a 2GHz quad-core chip, and a 500GB mechanical drive, costs over $500.

That’s a lot of money to pay for a Chromebook, but Lenovo thinks this price is justified by the system’s build quality, and functionality. Are they right? Or would you be better off with a traditional ThinkPad that runs Windows?

Any questions we had about a Chromebook’s ability to live up to the ThinkPad name were quashed the moment we took the Yoga 11e out of its box. This is an extremely sturdy laptop. It’s so sturdy, in fact, that it’s thicker and bulkier than many of its peers.

Plastic is the material of choice. That’s not a surprise given the price, and it follows the brand’s tradition. While metal looks great, and feels expensive, it’s easy to dent unless it’s thick. Properly constructed plastic is lighter, and just as sturdy. Material quality and feel is boosted by a soft-touch coating around the edges of the display lid, and a rough coat on the laptop’s bottom that’s easy to grip. Both add a touch of class, and make it unlikely that the Yoga 11e will slip from your hands.

Connectivity consists of two USB ports. One of them is a 3.0 connector, while the other can charge a USB device even when the Yoga 11e is turned off. An HDMI-out, a combo audio jack, and an SD card reader round out the options. Wireless connectivity is handled by 802.11n Wi-Fi, and Bluetooth 4.0.

A keyboard that’s second to none

Most Lenovo laptops have a decent keyboard, but the Yoga 11e goes above and beyond in this area. Key feel is excellent, with a crisp bottoming action that always makes key activation crystal clear. The layout does a great job of using available space too, with hardly an inch wasted.

The 11e features a rugged design, great keyboard, and a decent display with wide viewing angles.

Like all Chromebooks, the Yoga 11e provides a row of unique function keys, instead of the usual assortment of F1 to F12. These control features like brightness and volume. They also provide shortcuts for reloading Web pages, and flipping back and forth between recently visited sites as well.

One thing that’s not included is a back-light. Using this system in the dark isn’t easy. To be fair, we haven’t seen a Chromebook with keyboard back-lighting, but the first one we come across that does it right will earn praise from us.

An extremely large touch-pad that measures over four inches wide, and two inches deep hangs out below the keyboard. This system, unlike most ThinkPads, does not include a pointer stick. Some users will find that to be a disappointment. At least the touch-pad itself is excellent. It’s big, responsive, and offers good tactile feel in its integrated left/right buttons.

Users can also navigate via the 11e’s touchscreen, though there’s not much of a reason to do this when the Yoga 11e is in clam-shell mode. The touch-pad is fine, and the Chrome OS interface is built for use with a mouse pointer, not the pointer on your hand.

A virtual keyboard activates when the 360-degree hinge is folded over for tablet use, but that simple concession is not enough to make this system worth using in tablet mode. Professionals who want a real dual-mode device should settle on keeping their notebook and tablet separate, or pony up for something like the Microsoft Surface Pro 3.

IPS to the rescue

Like almost every other Chromebook available, the Yoga 11e offers a 1,366 x 768 display. Unlike most alternatives, though, it has an IPS screen. That means better viewing angles, improved contrast, and more vivid colors.

The Lenovo ThinkPad Yoga 11e is the most generously equipped Chromebook we’ve ever tested.

The benefits are obvious when watching YouTube, or even while looking at high-quality photos. Colors seem to jump from the surface of the display, while shadows look like they’re made up of an inky shade of black. Sharpness could be better though, as 720p resolution translates to only 135 pixels per inch, but that’s better than a cheap 13 inch or 15 inch Windows notebook.

Everyone will enjoy using this display. The wide viewing angles on the 11e makes content consumable from a variety of perspectives. It also allows for easier use in cramped confines, like when you’re on a plane. This is always great, but it’s particularly important here because of the system’s focus on professional use.

Audio quality is passable. The Yoga 11e is never loud, not even at maximum volume, but the speakers remain clear throughout their range. They handle the human voice extremely well, so you’ll have no trouble understanding others in an online video conference.

The Lenovo ThinkPad Yoga 11e is the most generously equipped Chromebook we’ve ever tested. The quad-core Intel Celeron 1.83GHz processor is joined by 4GB of RAM, and a 16GB solid state drive. Most Chromebooks, by contrast, have a dual-core processor, and only 2GB of RAM.

Don’t get too excited, though, because the quad-core chip here is built on Intel’s Bay Trail architecture. That means it’s substantially slower than the Haswell-based processors found in mainstream Intel Core laptops.

We recorded a Peacekeeper Web browsing benchmark result of 1,449. That score is 236 behind the Samsung Chromebook 2. It’s ahead of the Lenovo N20p, but only by 84. Meanwhile, the 11e’s score is roughly half of the Acer C720P’s.

The Yoga 11e does feel quicker than dual-core Bay Trail-based alternatives, however. We saw less lag with multiple tabs open, and no instances of checker-boarding, which is a graphical artifact that can appear when a Web page doesn’t render quickly enough to keep up with the user’s scroll speed. Complex websites don’t scroll smoothly, however, and most games run poorly. Demanding users will be frustrated with the CPU’s limitations.

Easy to carry, but you’ll hunt for outlets often

The Yoga 11e weighs about 3.3 pounds, and is just under one inch thick. This makes it heavier than similar systems, including Lenovo’s own Chromebook N20p. Most users will notice the difference in their hands, but won’t be able to detect it once the system is packed up for travel.

Everyone will enjoy using this display.

We recorded four hours and 52 minutes of endurance in the Peacekeeper Web browsing benchmark, which is a very mediocre result for a Chromebook. The Samsung Chromebook 2 lasts six hours and 19 minutes, while the Lenovo N20p lasts seven hours and one minute.

We recorded about seven watts of power draw at idle, and up to 12 watts at load. The low-power processor here is efficient enough to let the Yoga 11e get away with silent passive cooling.

The Lenovo ThinkPad Yoga 11e Chromebook is an interesting alternative to a traditional, expensive business notebook. It nails down most of the basics. The 11e features a rugged design, great keyboard, and a decent display with wide viewing angles.

Whether Chrome OS can serve as an alternative to Windows is questionable. Users who only need a computer for basic productivity tasks like word processing, Web surfing, and simple image edits should find this notebook to be pleasing enough.

What really hurts the Yoga 11e is its modest battery life, and weak processing power. Less than five hours of endurance in our Web browsing test is not a great result. Plus, the quad-core Celeron chip doesn’t impress.

This puts potential buyers in a tricky spot. Going with the Yoga 11e gets you certain perks, but it also means you’ll be paying around $360 for a Chromebook that’s neither the fastest or most portable one around. Lenovo might say that it’s priced high due to the 360 degree hinge. However, that would be a poor argument, because Chrome OS isn’t great for use with a touch-enabled display, and the system weighs too much to be fun to use as a tablet.

Whether this Chromebook’s compromises make sense to you depends on what you’re looking for. If you desire a top of the line keyboard, the Yoga 11e is the Chromebook for you.

Best MacBook deals: Save on MacBook Air and MacBook Pro
Best laptop deals: Save on Apple, Dell, HP and Lenovo
Best Chromebook deals: Get a new laptop from $99
The best laptops you can buy in 2022
The best gifts for PC gamers
Google is now supporting my awful browser habits, and I love it
Google just revealed what you found most fascinating in 2022
Even 15-inch portable monitors come in OLED now
How to reset graphics drivers in Windows 11
The most common multi-monitor problems and how to fix them
Upcoming MacBook Pro could have a 20-inch folding display
This Alienware gaming laptop with an RTX 3080 is $650 off today
This Lenovo laptop is just $129 today, and it’s selling like hotcakes