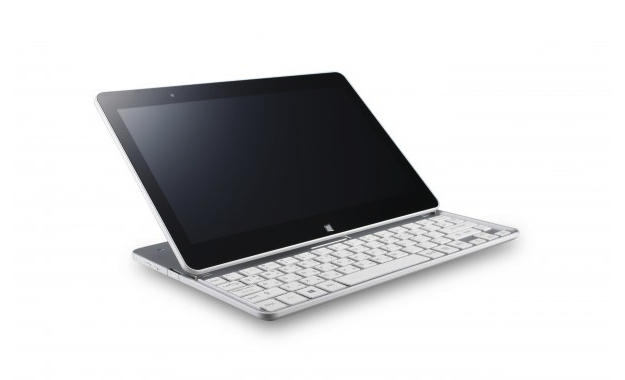 At CES 2013, LG displayed a pair of Windows 8 tablets named Tab Books, with the model numbers Z160 and H160. At the time there were only a few details available, and none at all on the price or a possible release date. This may all change at Mobile World Congress, as LG has put up a blog post on its UK website saying one of the Tab Books will make an appearance at the show.

Although there were two models at CES, this time there’s only one, and it’s simply called the Tab Book. If we were frustrated by the lack of much information last time, it’s perhaps even worse now, as LG hasn’t even given the Tab Book a model number. That won’t stop us though, as the few technical details it does provide can help us make an educated guess as to which one it is.

The Tab Book will run full Windows 8 and is powered by an Intel Core i5 processor. The screen size is a mystery, although it is an IPS panel with a 178 degree viewing angle. A button on the side of the slate pops the keyboard out and stands the screen at a slight angle, plus the tablet will have 4G LTE connectivity built-in.

From this we can deduce it’s the Z160 tablet, as the H160 was said to use an Intel Atom processor rather than the more powerful Core i5. This puts the screen size at 11.6-inches with a 1366 x 768 pixel resolution. At nearly 20mm thick and 1.2kgs in weight, the Z160 is more Ultrabook than tablet, but LG says this combined with the pop out keyboard makes it, “More functional,” while an LG senior vice president is quoted as saying the Tab Book will appeal to people who, “want the convenience of a tablet but also the productivity of a notebook.”

LG will put the 4G LTE Tab Book on sale in Korea later this week, and will provide more information on an international release in the future. As the Tab Book is going to be at Mobile World Congress and has now been featured on its UK blog, we’d expect LG to talk about a European launch next week.